The drive to expand readership of the Militant and of books by Socialist Workers Party leaders and other working-class revolutionary leaders got off to a good start during its first week. The drive focuses on helping workers, farmers and other exploited producers in cities, towns and rural areas gain a deeper understanding of what our class faces today, and how we can advance solidarity with struggles workers are engaged in, as well as introducing the party’s program through door-to-door discussions.

Party members and other Militant supporters use the paper to build support for the nearly 50,000 autoworkers locked in an important national strike battle against General Motors.

“We’ve received an overwhelming response — especially for the Militant’s support to the GM strikers — from workers at the Ford assembly plant here where some 6,000 United Auto Workers members work,” writes SWP member Dan Fein from Chicago. “At the afternoon shift change Oct. 9, workers bought five subscriptions, 61 copies of the paper and two copies of Tribunes of the People and the Trade Unions and one of The Clintons’ Anti-Working-Class Record: Why Washington Fears Working People.

“We have visited UAW strike picket lines in Fort Wayne, Bedford and Kokomo, Indiana; Flint, Michigan; Toledo, Ohio; and Bolingbrook, Illinois,” Fein said. “Everywhere the paper is well received. And we combined the picket line visits with using the paper to build support for the strike by knocking on workers’ doors in each area.”

With 49 Militant subscriptions sold during the drive’s first week, supporters in Chicago raised their goal to 110.

In Bedford, Samir Hazboun, SWP candidate for Kentucky lieutenant governor, and a team of supporters from Louisville went door to door a few blocks from the UAW picket line at the GM casting plant to build solidarity Oct 12. “I’m behind the strikers 100 percent,” said Tammy Hopper when SWP campaigners knocked on her door. “Many of these lost their mortgages, missed car payments, medical bills. It’s awful how these company people treat these workers.”

At the same house, Richard Troyer, a self-employed worker, was getting ready to bring firewood to the GM picketers. He asked Hazboun, “If you’re running in Kentucky why are you here in Indiana?”

“We’re trying to help build a working-class movement that can really change the conditions we face,” Hazboun said. “We say what changes things is what the GM workers are doing — standing up and fighting back. We need a movement that is independent of the capitalist class. The Democrats and Republicans will stab workers in the back first chance they get.”

They talked about whether the problem was foreign-made cars versus American-built, and about immigration. “We need to build an international workers movement,” Hazboun said. “And we need to fight for amnesty for undocumented immigrants. That’s critical for the unity of the working class.”

“I don’t think a border wall will fix anything,” Troyer said. “We should be trying to figure out how to fight for better wages, benefits and conditions for workers in Mexico so they don’t feel the need to leave their homes. That would be good for all of us.”

Troyer got The Clintons’ Anti-Working-Class Record by SWP National Secretary Jack Barnes and a Militant subscription.

When Joel Britton and supporters of his SWP campaign for mayor of San Francisco took the party and its program to workers on their doorsteps in San Jose Oct. 12, they met sanitation worker Tony Johnson, who described what he and his co-workers face at the nonunion recycling plant where they work.

He told Britton he was inspired when Teamster union members, trash and recycling workers, on strike at Republic Services from Marshfield, Massachusetts, came all the way to California to picket the company sites in San Jose, Fremont and Milpitas. Sanitation workers and other truck drivers refused to cross their picket lines. “Please write about this fight in your paper,” Johnson said.

“I have to be involved, I’ll keep fighting. You people have made my day,” Johnson said as he signed up for a Militant subscription and got Malcolm X, Black Liberation, and the Road to Workers Power by Barnes and In Defense of the US Working Class by SWP leader Mary-Alice Waters.

One of the central goals of the drive is to get into the hands of working-class fighters a broad range of books by  revolutionary leaders. They explain — from the rich experiences of our class — how we can transform ourselves in struggle, gain self-confidence and build class consciousness. 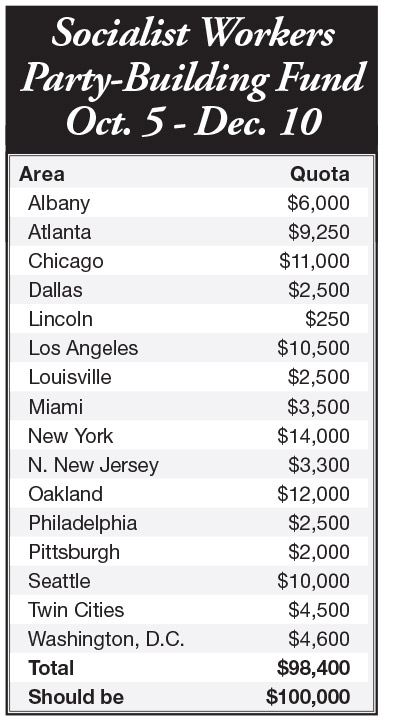 All Pathfinder books and copies of the New International magazine, edited by SWP leaders and co-thinkers abroad, will be offered at 20% off through the drive. In addition, eight titles are offered at half price when purchased with a Militant subscription. (See ad below.) Beginning Nov. 1, an important new title will be available — The Turn to Industry: Forging a Proletarian Party.

The drive is an international effort, including participation by Communist Leagues in Australia, Canada, New Zealand and the United Kingdom, as well as workers who join in around the globe.

Anthony Dutrow, SWP candidate for Miami City Commission, and party member Chuck Guerra went house to house in Bell Glade, Florida, Oct. 13. They spoke with agricultural workers about conditions they face on area farms and how the U.S. Department of Agriculture continues to stall in repairing the dilapidated housing complex they have to live in. The government built it decades ago to assure bosses a steady supply of labor for the big sugar crops and area mills.

“We had to buy our own paint to cover the growing mold outbreak that goes unattended by the housing authority,” 22-year-old Emmanuelle Datiniste told Dutrow. “Mold was so bad in the walls that it got all over my baby’s clothes.”

The team sold two subscriptions, one to a woman whose husband drives a sugar cane truck 12 hours a day. “She was interested in the party’s program to unite the entire working class, especially with farmworkers, who are the most poorly paid,” Dutrow said. A farmworker originally from Mexico also got a subscription, and asked that “we bring the Spanish-language edition of In Defense of the US Working Class the next time we come by.”

The Militant is appealing to readers who value its coverage of labor struggles and the political questions facing workers today to join in this effort to broaden the reach of the paper and revolutionary books. To get involved, contact the SWP or Communist League in your area.

MONTREAL, Quebec — “The heart of a union is workers’ activity in defense of our rights,” Alyson Kennedy, the Socialist Workers Party candidate for president in 2016, told striking members of United Steelworkers Local 9414 Oct. 10, when she visited…