SAHUARITA, Ariz. — Some 1,700 copper workers on strike at Asarco’s five complexes in Arizona and Amarillo, Texas, since Oct. 13 are fighting naked union busting by the bosses. They deserve the support and solidarity of workers everywhere.

Worker-correspondents for the Militant from Los Angeles visited the picket lines in Arizona Nov. 11 and 12. We found strikers are winning solidarity from working people and small businesses in the region.

The United Steelworkers, Teamsters and five other unions on strike have called a demonstration outside Asarco’s offices in Tucson on Nov. 18 from noon to 2 p.m. (See ad below.)

“We know the company is highly profitable,” said Ryan Connolly, a truck shop mechanic at the Silver Bell mine north of Tucson and member of USW Local 937. “The company is willing to take on significant losses to bust the union in the long run.”

Members of the seven unions at the mine voted 77% to reject the company’s “last, final and best” offer that workers call “insulting.” That’s an understatement.

“With every contract we’ve signed we’ve lost something and we’re just tired of them taking advantage of us,” said Kathy Coleman, a haul truck driver at the Ray mine near Kearny.

“There’s been a whole lot of contempt towards the union,” said Tim Davies, chief shop steward for the Operating Engineers at the Mission complex.

Asarco’s proposal would continue a freeze on wages for nearly two-thirds of the workers, who haven’t had a pay increase in 10 years, while slightly increasing the wages of the highest paid — an attempt to divide workers and weaken the unions. It would double or triple health care premiums and deductibles and undermine seniority rights. The bosses’ ultimatum also takes away contractual protections for the unions to defend workers on the jobs.

In an Oct. 24 phone conference with its investors, Asarco owner Grupo Mexico — the fourth largest copper conglomerate worldwide — boasted quarterly sales reached $2 billion, an 8.4% increase, despite a drop in copper and zinc prices. The company made it clear it’s not interested in negotiating with the unions. Its goal is to get workers to cross the picket lines and add in more scab labor to get the Mission mine production up to 100% by the end of the year.

Many strikers told us how conditions on the job have been steadily deteriorating, increasingly jeopardizing safety. Vehicles and equipment in open pit mines make individual cars and trucks look like toys. The tires alone can be more than 12 feet tall and weigh 10,000 lbs.

Fight for workers control over safety

“The bosses say we don’t matter,” David Copeland, a shovel and drill mechanic who has worked at the Mission mine for over 20 years, told the Militant. “They tell us they’ve got people beating down the door to get your job.” He described one boss who is fond of getting in the face of new hires to say, “I could fire you right now if I want to.”

“We’ve done nothing but go backwards and lost ground,” he said. “Seniority is not honored for anything. They hire people who are related to the bosses and give them the choice jobs.”

In July 2017 Gabriel Benitez was run over by a mine dump truck while sitting in his pickup truck at the Mission mine. “He was a new guy, not adequately trained,” Copeland said. “The company found a way to blame the dead guy because he can’t defend himself.”

Miguel Romero, a welder at the Mission complex for 12 years, said, “They used to have 22 welders. Now they’re down to five. Still no raise in 10 years and they want us to do all the work that 22 people used to do.”

In addition to Asarco, Grupo Mexico owns mines in Mexico, Peru, Argentina, Chile, Ecuador and Spain. “What they pay those people per day is what we get in an hour,” Romero said. “That’s just wrong.”

Only a few dozen out of 800 at the Ray mine have crossed the picket line, which is lively and boisterous, especially when trucks enter or exit the mine. “We had no choice but to go on strike,” said Fidel Aborca, an operator at the Ray mine. “A neighbor said the other day he got called by Asarco for a job. ‘I’m not crossing any picket line,’ he told me.”

Recently a group of airline workers stopped by the picket line to bring support. Food donations are plentiful. One UPS driver dropped off a truckload of firewood to get strikers through the cold weather. “I didn’t think solidarity would be this good,” said Romero.

On Nov. 11, 30 members of the UNITE HERE union joined United Food and Commercial Workers members who came with lunch for everyone and bolstered the picket line for hours. 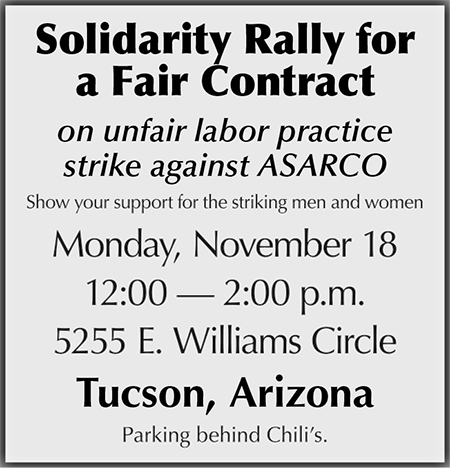 After Union Pacific rail workers and their union announced they wouldn’t cross the picket line, the rail bosses notified Asarco they would no longer service the mine.

Maria Garcia runs Maria’s Cafe in Mammoth and her husband is a striking miner. “If the workers don’t have work, we don’t have work,” she told us. “That’s why I’m helping. I take food to them. A union contract isn’t just for the workers, it goes to maintain the families.”

A solidarity letter signed by some two dozen workers from a Walmart store in Los Angeles where this Militant correspondent works was greatly appreciated by striking workers.

Steelworkers Local 937 President Alex Terrazas said he had been a Walmart worker before he started working at the Mission mine. “This letter means a lot to me because I know how abusive Walmart is,” he said.

Miners continue reaching out for support. “Two weeks ago we paired up in groups of two or three to pass out flyers at supermarkets in Sahuarita and Tucson,” said striker Bill Foor. “I went to Fry’s in Sahuarita and got out 30 to 40 flyers. I was surprised by the good response. Half knew about the strike and half didn’t.”

Karla Schumann, a strike coordinator for Teamsters Local 104, said, “In the coming weeks, we’ll have a much bigger push for community outreach.”

Asarco has been trying to keep production going but had to shut down the refinery in Amarillo, Texas, and smelter in Hayden, Arizona. They have hired scabs at the Mission complex to join some miners crossing the picket line. At the Silver Bell mine, the company’s smallest facility, most of the workers crossed the picket line with only 10 staying out on strike.

There is a long history of hard-fought bitter miners’ battles in Arizona, including the 1983-86 Phelps Dodge bosses’ assault on workers in Morenci that broke the union. So workers know the stakes are high.

Retired miner Bill Becker worked at Silver Bell for 10 years. He has been a regular at the picket line. “This is a long run kind of thing and if you don’t stand up you get stepped on,” he said.

Workers at the Amarillo refinery held an expanded picket line Nov. 6, joined by members of Local 13-487 from the Valero oil refinery in Dumas, Texas, who cooked a meal for participants.

Send solidarity messages to the strikers via palfchair@gmail.com. Donations to the strike fund and the food pantry can be made via: paypal.me/palfcommunityservice. Everyone is welcome to join the picket lines in Arizona and Amarillo, Texas.

Bernie Senter is a worker at Walmart in Los Angeles.

All out for Asarco strike rally Nov. 18!

If there’s any way you can swing it, the Militant urges readers to join the Asarco copper strikers’ rally in Tucson, Arizona, Nov. 18! Their fight in Arizona and Texas deserves support and solidarity from working people everywhere. Speak out…

BLAINE, Minn. — Chanting “What’s disgusting? Union busting,” some 200 union members and others joined an expanded picket line for striking members of United Steelworkers Local 63B Nov. 7 outside the Carley Foundry. The 220 workers there have been on…

LORTON, Va. — Over 50 Metrobus drivers, mechanics and other workers at the Cinder Bed garage and maintenance facility here walked off the job Oct. 24. They are members of Amalgamated Transit Union Local 689, which represents bus, subway and…

VANCOUVER, British Columbia — Hotel workers, members of UNITE HERE Local 40, have been picketing the Rosewood Hotel Georgia here since walking out Sept. 22. Management broke off talks Oct. 23. The workers are fighting for a wage raise, safe…