As the Socialist Workers Party drive to expand the readership of the Militant and books by revolutionary leaders of the working class enters its final week, party members are finding interest in the need to build a working-class movement independent of the capitalist two-party system.

The paper’s coverage of the recently concluded Canadian National Railway strike by Teamsters, and the ongoing copper workers’ battle against Asarco’s union-busting drive in Arizona and Texas point to the impact of working-class solidarity in advancing struggles that are in the interests of all workers. And the protests shaking capitalist regimes from Colombia, Chile and Ecuador to Iraq, Lebanon and Iran today pose questions about forging the leadership working people need — questions that are addressed in books by revolutionary leaders available from SWP members that draw on the lessons conquered in over 150 years of working-class struggle.

Gains being made in the fight against cop brutality, frame-ups and the other indignities of the rulers’ criminal “justice” system is a question SWP members often discuss as they present the party’s campaigns.

When George Chalmers introduced the SWP’s campaign of Gerardo Sanchez for U.S. Senate from Texas to Paul Young, a 29-year-old bricklayer at his home in Fort Worth, Young replied, “We have to get rid of Ted Cruz,” the Republican incumbent.

Chalmers explained that the SWP runs against the capitalist two-party system — Republicans, Democrats and their socialist hangers-on. And he pointed to the capacities of working people to fight together to change the conditions we confront. He described the protests organized by the family of Rodney Reed that forced state authorities to grant a stay of execution to Reed just days before it was scheduled.

Reed, an African American, was convicted by an all-white jury in 1998 for the rape and murder of 19-year-old cashier Stacey Stites in Bastrop, Texas. “I just heard about Reed’s case,” Young replied.

Chalmers showed Young a copy of The Clintons’ Anti-Working-Class Record: Why Washington Fears Working People, by SWP National Secretary Jack Barnes, pointing to the book’s description of the massive jump in the number of people incarcerated under Bill Clinton’s presidency. Clinton also lays “justified claim to the shameful designation, the ‘death-penalty president,’” Barnes writes. His administration expanded the number of crimes subject to capital punishment.

Young bought a copy of the book, a subscription to the Militant and asked Chalmers to stay in touch.

“I like what you say about workers needing our own party,” electrician Max Subuchov told Jonathan Silberman, Communist League candidate for the Tottenham seat in this month’s U.K.’s parliamentary election, when Silberman knocked on his door in Tottenham Hale, Dec. 1. Subuchov had come to the U.K. from Ukraine 18 years ago.

“We could do with a Maidan in the U.K.,” Subuchov said, referring to the mobilizations and pitched street battles that led to the overthrow of the hated pro-Moscow regime of Ukrainian President Viktor Yanukovych in 2014. The powerful movement had a big impact on the confidence and fighting spirit of working people across the country. Subuchov bought the CL campaign button that reads “Workers need our own party — Workers control over safety — Vote Communist League.”

The same day, students Christian and Dana Dunca picked up campaign buttons and got a subscription to the Militant. “We came here from Romania to improve our lives and bring up a family,” Christian Dunca told CL campaigners, “but the parliamentary parties do not represent the views of working people.” 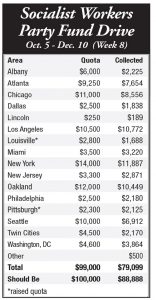 The drive to sell 1,100 Militant subscriptions and 1,250 books runs through Dec. 10. At the same time the SWP is on a drive to raise $100,000 to help fund the party’s political activities. A final push to win new contributions can ensure the party meets and exceeds its nationwide quota.

To facilitate a greater understanding of the SWP’s revolutionary program, all Pathfinder books and copies of the Marxist magazine New International are being offered at a 20% discount through the end of the drive. Also, eight titles are offered at half price when purchased with a Militant subscription.

And the new title The Turn to Industry: Forging a Proletarian Party by Jack Barnes is available at a special price of $12, or $10 with a subscription. Three copies of the book were sold by party members in Dallas, after they contacted Militant subscribers, Alyson Kennedy reports.

The book “is about the working-class program, composition, and course of conduct of the only kind of party worthy of the name ‘revolutionary’ in the imperialist epoch,” writes Barnes in the introduction. “The only kind of party that can recognize the most revolutionary fact of this epoch — the worth of working people, and our power to change society when we organize and act against the capitalists and all the economic, social, and political forms of their class rule.”

Those wanting to join the effort to broaden the reach of the Militant and revolutionary books and help with the fund drive can contact the SWP or Communist League branches in your area.