The Militant extends a warm welcome to the 1,208 readers who subscribed to the paper during the Socialist Workers Party fall drive to win new readers that concluded Dec. 10. Party members also raised over $100,000 for the party’s annual fund drive and sold 1,592 books by SWP and other revolutionary working-class leaders, meeting each of the goals set during the drive in full and on time.

We offer a special welcome to the 28 workers behind bars who got or renewed their subscription. The fall campaign came on the heels of the victory by supporters of democratic rights against Florida prison authorities’ suppression of the Militant.

New readers will find the Militant a unique source of information about today’s labor struggles and a tool for building much-needed solidarity with these fights.

Holding up signs saying, “Read about CN rail strike for safety,” SWP members Tony Lane, Malcolm Jarrett and Ruth Robinett got a good response from rail workers they spoke to at the Conway rail yard north of Pittsburgh Nov. 27. They sold one subscription to a rail unionist and six copies of the paper.

“We’re tracked and trained to work for big companies from an early age,” said Tatiana Nelson, a 20-year-old Walmart worker in Atlanta, who recently purchased the book Are They Rich Because They’re Smart? Class, Privilege, and Learning Under Capitalism by SWP National Secretary Jack Barnes. In the book Barnes explains that under capitalism working-class schooling is organized for the “destruction of human solidarity, as the organization of a society based on class differentiation, where human beings in their late teens become units of production in the minds of personnel managers.”

Nelson got the book and a subscription to the Militant from co-worker Lisa Potash, an SWP member, after Potash showed her articles in the paper about the bosses’ offensive in the retail industry and ongoing labor battles. Nelson told Potash that she had to leave college because of the high cost and now goes to school after moving back in with her family.

In Hometown, Illinois, Chicago SWP members Dan Fein and Leroy Watson met Joshoa Gantile when they campaigned door to door Dec. 8.  He wondered what the difference is between the Democratic Socialists of America and the SWP. “We’re building a working-class movement to replace capitalism through a socialist revolution,” said Watson. The DSA works inside and tries to strengthen the Democratic Party, one of the twin parties the U.S. imperialists use in their assaults on working people and their wars abroad. The SWP urges working people to break with the capitalist two-party system, pointing to the need to build a labor party to defend the interests of all workers. 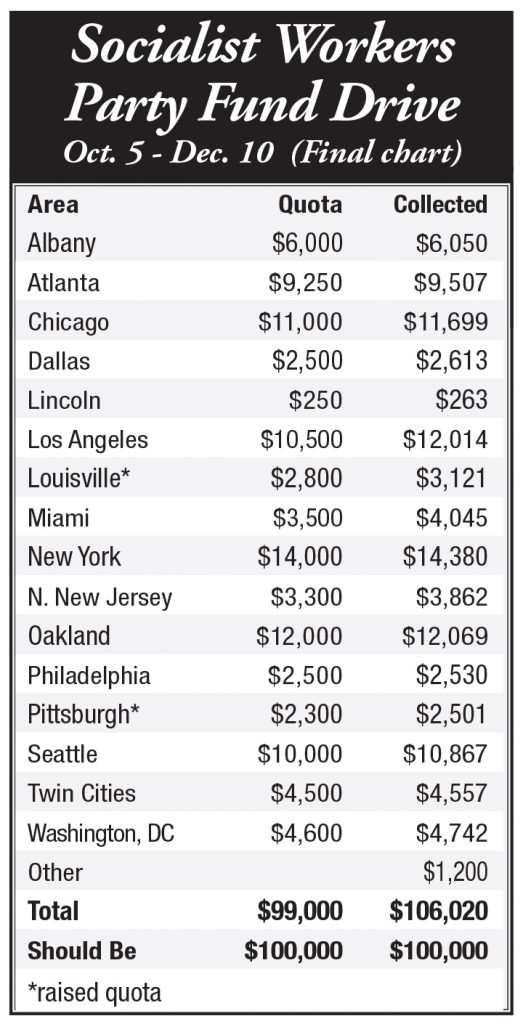 “This book describes the kind of party necessary to lead a working-class revolution in the U.S. and other capitalist countries,” Fein explained, showing Gantile The Turn to Industry: Forging a Proletarian Party by Barnes. He got the book and In Defense of the US Working Class by SWP leader Mary-Alice Waters, as well as a subscription to the Militant.

Some $106,000 was raised for the SWP’s fund drive, over the $100,000 goal. Contributors to the fund included working people that party members met as they campaigned door to door and others who wanted to back the work of the party after hearing its candidates speak and joining their campaigns.

Communist Leagues in Australia, Canada, New Zealand and the U.K. joined the drive to win new readers to the Militant and distribute books. The last weekend of the drive coincided with the final weekend of the U.K. general election campaign. Supporters of Jonathan Silberman, Communist League parliamentary candidate in the London constituency of Tottenham, took their campaign to working people in Harlow, Essex, Dec. 6, selling three subscriptions and two books on revolutionary politics.

On Dec. 8 CL campaigners participated in a “Together Against Antisemitism” rally of 3,000, in central London. During the election campaign, Labour Party leader Jeremy Corbyn has faced widespread criticism for his backing to anti-Semitic members and leaders in his party.

Some rally participants were surprised to hear that former Cuban President Fidel Castro spoke out unequivocally against Jew-hatred and defended the existence of Israel. Demonstrators took campaign literature and bought 10 copies of the Militant. One person got the book The Jewish Question by Abram Leon from the CL campaigners.

In the book Leon explains how in times of deepening social crisis Jew-hatred is incited by the capitalists to mobilize reactionary forces against revolutionary struggles and help save the rulers’ exploitative system. It describes how the future of the Jewish people is tied to the capacities of working people to organize a movement to end capitalist rule.

Books on revolutionary politics offered during the drive explain how workers and their allies will be transformed through such struggles and become capable of taking power into our own hands.

Efforts to expand the readership of the Militant and books on revolutionary politics do not end with the conclusion of the fall drive, but will continue as Socialist Workers Party candidates for office get their campaigns underway for 2020. The Militant is an irreplaceable tool for learning what can be done to advance the struggles of working people today.

To join efforts to get the paper around, get in touch with a branch of the Socialist Workers Party or Communist League.