The Socialist Workers Party 2020 presidential ticket will be announced shortly and a slate of candidates across the country is advancing a program for working people to defend their jobs, income and safety and fight in the interests of all the oppressed. They are campaigning on workers’ doorsteps in cities, towns and rural areas, on workers’ picket lines, at protest actions and other political events presenting a program to unite working people to fight attempts by the bosses to make us pay for the crisis of their capitalist system.

By advancing working-class struggle, the party’s platform explains workers can take steps to build class consciousness and see the need to replace the rule of the capitalist class with a workers and farmers government. And the party’s candidates explain what can be done to advance that way forward today. They point to the need for workers control of conditions on the job and for a labor party, based on the unions, to lead a political fight to defend workers’ wages and living conditions.

“We’re getting a real hearing,” Maggie Trowe, Socialist Workers Party candidate for U.S. Senate from Kentucky, told the Militant by phone Jan. 21. Trowe, who works at Walmart, noted that campaign supporters in Kentucky have been getting back to people they met over the last year. During the strike at General Motors, campaign supporters met a Ford worker who had joined a solidarity caravan. “We ran into her again when we were campaigning for the SWP ticket on workers’ doorsteps,” Trowe said. “Last week she came to a Militant Labor Forum in Louisville.”

SWP member Ellen Brickley spoke at the forum, explaining the campaign platform’s call for a “fight for workers control over production and safety in the factories, mines, railroads and all energy monopolies to protect those on the job and in nearby communities.”

No worker should die on the job

Some 5,250 workers died on the job in the U.S. in 2018 — the latest year figures are available — because of the capitalists’ drive for profits and their disregard for the life and limb of workers.

“No worker should die on the job because of capitalist greed,” Brickley said. Socialist Workers Party campaigners across the country explain that workers and their unions must have the right to stop production if conditions are not safe

“The Ford worker told us she loved the forum,” Trowe reported.

In Texas, the SWP is running Gerardo Sánchez, a worker at Walmart, for U.S. Senate. “We’ve been explaining working people need to build our own party,” he said. “A lot of people respond positively to that. But especially in the big cities like Dallas some who are bombarded by the liberals’ media argue we need to get rid of Donald Trump first.

“We explain the anti-Trump hysteria is no road forward. The rule of the capitalist class and the lesser-evil politics of their two main parties is the problem we face,” Sánchez said.

“We explain that the impeachment of Trump is really aimed at the working class. If they can violate the president’s constitutional rights, they can do it to you, too.”

Rail worker Henry Dennison is the SWP candidate for governor of Washington state. Dennison and a campaign supporter went door to door in Mountlake Terrace, a working-class town north of Seattle, in early January around the time a U.S. drone strike killed Iranian Revolutionary Guard Gen. Qassem Soleimani in a combat operation in Iraq.

“Most of the people we talked to were opposed to the U.S. intervention there,” Dennison said. “We sold a Militant subscription to a guy from Libya. Our party calls for U.S. troops to get entirely out of the Mideast. I asked him if anything that Washington has done in Libya had made life better there. He laughed and said ‘no.’”

The Militant also reports on the struggles waged by working people in Iran against the government, as well as protests for political rights in Iraq and Lebanon that workers have a stake in.

We need a political party that will point a road forward for the entire working class, Dennison said, that explains the class side of every question, from U.S. war moves abroad to the fight for Black rights and for women’s right to contraception and to choose abortion.

Dennison walked the picket lines of striking copper workers at Asarco mine complexes in Arizona and is building solidarity with them.

The communist candidates and the party’s platform take up other questions of importance to the working classes.

Naomi Craine, a railroad worker and the party’s candidate for U.S. Senate in Illinois, joined in and spoke at a Jan. 10 rally in Chicago to demand freedom for Gerald Reed and all other victims of torture at the hands of the Chicago police. Reed’s conviction was overturned in December 2018 but he is still in jail, as prosecutors are pushing for a new trial.

“It’s an outrage that Reed is in jail a year after his conviction was vacated,” Craine told the protesters. “This is part of what is an injustice system that comes down against working people, disproportionately against those who are Black or Latino.”

Craine and other SWP candidates encourage people they meet to read “It’s the Poor Who Face the Savagery of the US ‘Justice’ System”: The Cuban Five Talk About Their Lives Within the US Working Class along with other books by party leaders. SWP leader Mary-Alice Waters in her introduction notes that prisons are a “grotesquely magnified reproduction of the social relations, values, and ‘business practices’ of the dog-eat-dog capitalist world.”

Between now and November SWP candidates are urging other workers to join them in action against the many injustices that capitalism breeds and are presenting a course of working-class struggle to overturn capitalist rule. 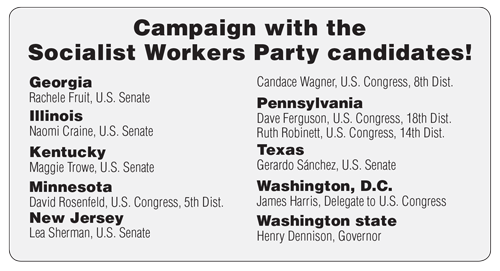 Socialist Workers Party candidates around the country present a course of working-class struggle against the employing class — the necessity of fighting to defend and improve our wages, social rights and working conditions. These struggles — and solidarity with others…