ATLANTA — A meeting to celebrate the political contributions of Cheryl Goertz, a 55-year cadre of the Socialist Workers Party, was held here May 30. Participants came from Atlanta; Greensboro and Hayesville, North Carolina; Miami and Plant City, Florida; Carrollton, Georgia; and New York.

Goertz died May 19 of complications from a lifelong congenital autoimmune disease. She was born in 1944 in Hillsboro, Kansas, a farm town with a population of 2,500. In the mid-1960s Goertz joined the Lawrence, Kansas, Young Socialist Alliance chapter, and the SWP when she moved to Chicago.

Cheryl’s sister Beth described Hillsboro in her message to the meeting. “It was a Protestant rural community with town and farm closely interconnected, with farm crops determining town sales in many ways. Bartering was a part of the economy. For example, the person owning one of the gas stations bought furniture from our Dad and in turn we filled up our cars at no charge as payment.” 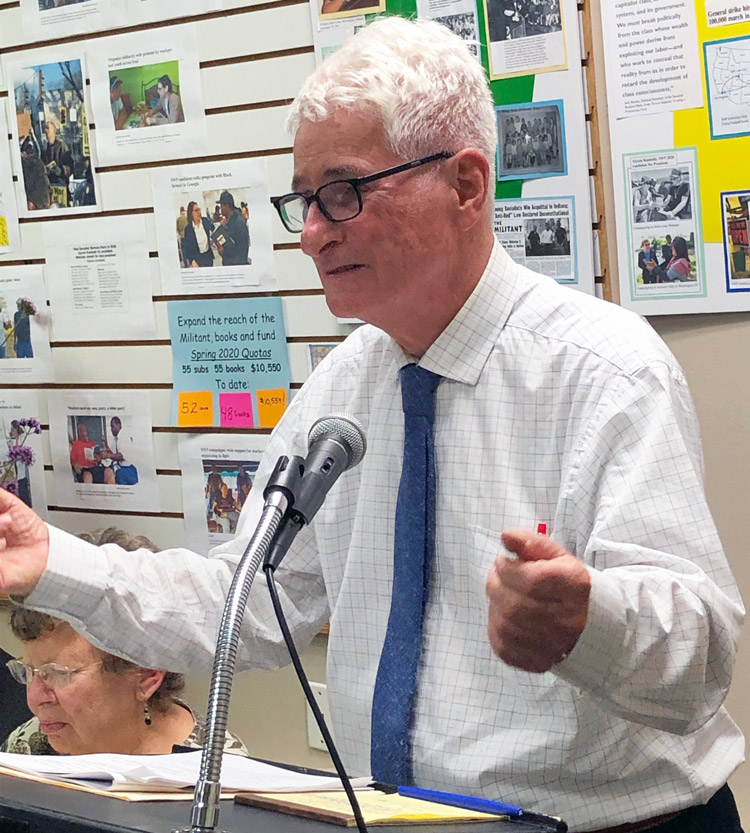 “Dad, a Republican, as most were in this area, was practical,” she wrote. “When on the Draft Board during the Vietnam War for our area, he determined that the farm boys were not eligible for the draft as they were needed for food production.”

These traits informed Cheryl, Beth said. “She was 100 percent reliable, steady, and calm.”

Susan LaMont, organizer of the Atlanta branch of the SWP, chaired the meeting. She welcomed participants, including Dave Wulp, Cheryl’s 50-year companion, and for more than half a century a member and supporter of the SWP.

She encouraged people to read the 23 messages sent by comrades, family and friends put together in a booklet for the meeting. The messages were sent by people who spanned the several generations Goertz had known and worked with building the party in cities across the country, as well as from Communist Leagues abroad.

LaMont said we are living in a period when the working class is awakening, with job actions by workers taking place. A time when thousands, in cities and towns, are taking a stand in protests against the police killing of George Floyd in Minneapolis and the vigilante lynching of Ahmaud Arbery in Georgia.

An attractive three-panel display of photos and articles highlighted the SWP’s activity in the last 55 years, and Goertz’s political work as part of it.

“There are descriptions in many messages to this meeting of Cheryl’s efficiency and of the carefully honed organizational skills she continued to develop for well over half a century in our movement,” Barnes said. “But there’s one possible misunderstanding that’s important to avoid. There was nothing administratively narrow, as organization is universally seen in bourgeois society, about Cheryl’s strengths and habits.

“Cheryl knew that the working-class movement had, above all, as its great strength, the ultimate capacity to organize millions of individuals who had never thought it was possible they would begin organizing a totally new society,” Barnes said.

“Proletarian politics without organization and habits is a pretense, and there was no pretense to Cheryl.”

John Benson, a leader of the SWP in Atlanta, described the world that politicized Goertz in the 1960s, as she saw and got involved in the SWP’s activity in response to these developments. Benson explained he was of the same generation, having joined the party just a few years earlier.

Goertz was inspired by the proletarian-led struggle to smash Jim Crow segregation. She decided to go to a meeting to hear Malcolm X speak in 1963 while attending a teachers’ education program in Detroit. She defended Cuba’s socialist revolution, led by Fidel Castro, where working people had taken power and uncompromisingly stood up to U.S. imperialism. The movement against apartheid in South Africa was growing, and protests against the U.S. war in Vietnam were beginning.

“But,” Benson emphasized, “she had to meet the party that was right in the center of these developments to put all this together.”

She threw herself into the fight against the indictment of three YSA members at Indiana University in 1963 on charges of attempting to overthrow the government of the state of Indiana.

Benson highlighted what he, Goertz and others of their generation learned from party leaders with experience in the big class battles in the 1930s. Benson pointed to a photo of Goertz, in her early 20s, having lunch with Ray Dunne. Dunne was a central leader of the Teamsters union battles in Minneapolis and throughout the Midwest, and of the Socialist Workers Party and its efforts to lead workers in opposition to the U.S. rulers’ entry into the second imperialist slaughter of World War II.

“Cheryl was of the generation of young people who joined the party at a time when they still had the opportunity to hear Ray Dunne speak to a Midwestern socialist educational conference and answer the question, ‘What does organizing a picnic right have to do with socialist revolution?’” Barnes wrote in his message.

“Ray answered by going through not only strikes and picnics, but workers militias, which were the beginning of the arming of the proletariat. And it was all based on direct personal experience Ray had been an integral part of.”

Fruit pointed to a message sent by Bill Arth from Los Angeles. “Cheryl regularly participated in the effort to back up our union fractions by participating in plant-gate sales,” Arth said.  “Cheryl and I were a regular team at a sewing factory in Bowden, Georgia.”

María Hernández, who worked at that plant when a party organizing committee was established in 2007 in nearby Carrollton, came to the meeting. She told this correspondent of the respect she had for Goertz and other SWP members she worked with. “Being here to celebrate her life with everyone has meant a lot to me,” she said.

Fruit added that Goertz was a mainstay of mine portal sales in Birmingham to help the party’s fraction in the United Mine Workers union.

“Cheryl had an unwavering conviction,” Fruit said, “that the working class will carry out its historic job and rid the world of the dog-eat-dog system of capitalism and begin to build a new society based on human solidarity. She was committed to the program and the party that is needed to lead that fight to victory.”

Fruit recounted some of the political campaigns of the party that Goertz had been a part of — the fight to stop the execution of Troy Davis, framed up in Georgia; the campaign to win the freedom of the Cuban Five; building the fight of Black farmers against discrimination by the banks and government.

LaMont brought greetings to the event from Willie Head, a working farmer from Pavo, Georgia, who had been involved in these fights over decades.

Mike Tucker wrote on behalf of the Communist League leadership in New Zealand, saying Goertz “found the road to a meaningful and purposeful life through building the revolutionary workers party.”

On behalf of the Communist League in Canada, Steve Penner wrote, “As the deepest crisis of capitalism since the 1930s depression unfolds, Cheryl’s contributions to building the kind of proletarian party needed to forge a class-struggle leadership in the class battles that are coming are invaluable.”

A trained and educated Marxist

Dave Prince spoke on behalf of the SWP national leadership. “Cheryl became a trained and educated Marxist in the party’s program, schooled in two basic books of the SWP, The Struggle for a Proletarian Party by James P. Cannon and In Defense of Marxism by Leon Trotsky, that describe how the party was steeled in the international fight to defend the continuity of Lenin and the Bolshevik Revolution against Stalinism in the 1930s, and its political corruption of giving up on making a revolution in the U.S. Her commitment was an example, to build a proletarian party to make the revolution in the country where you live, as part of joining the worldwide fight for socialism.

“Cheryl was part of the generations represented at this meeting that carried  forward that course and continue to do so today.

“Cheryl was a cultured person in the true meaning of the word,” Prince said, “how she related to and worked with others in collective, human solidarity.”

Her sister Beth had written, “Cheryl enjoyed music, both classical and jazz. She always carried the beat and kept the rhythm in her life going!”

“Cheryl and her companion Dave’s hospitality to many at their home over the years,” Prince said, “was always a welcome relaxation and complement to hard political work.”

Prince closed his comments with the closing words of Barnes’ message: “The most striking thing about Cheryl over fifty-five years was not her unusual debilitating and long-lasting illness, but what she was determined to accomplish with the strengths she marshaled, and the impact that had on others, including the many she helped bring to the communist movement.

“In doing this — I can testify personally — Cheryl’s work was and is an example to all of us.”

Participants contributed $1,135 to continue the work of building the party to which Goertz had devoted her life.