With just four and a half months left before the 2020 elections, Democrats and Republicans are trying to crank up their down and dirty fight for the White House and to win attention from working people. But neither self-described “progressive” Joe Biden nor incumbent President Donald Trump present any road forward for workers and farmers. Both have a proven record of shoring up the rule of the capitalist class who profit off our backs.

Socialist Workers Party campaign supporters are finding widening interest in the party’s working-class program and presidential ticket — Alyson Kennedy for president and Malcolm Jarrett for vice president. They are joining working people protesting against cop brutality, at Juneteenth commemorations, and on strike picket lines and protests against the bosses’ attacks on the job, and discussing the working-class alternative on doorsteps in cities, small towns and rural areas across the country.

This hunger for an alternative road forward grows as workers and youth look for ways to fight effectively today. This has led a growing number to get subscriptions to the Militant  and books on revolutionary working-class politics by SWP leaders to dig deeper into the invaluable lessons from previous struggles to end capitalist rule. Some are joining in campaigning for the party.

“I always see postings on the internet about how bad capitalism is, but there are never any ideas about what to do about it,” Jay Preutsker told Edwin Fruit at an SWP campaign table after a Juneteenth celebration in Seattle. Fruit explained the SWP campaign focuses on what it is for, not what it’s against.

Preutsker said she had been thinking of voting for the Green Party, but got an SWP campaign flyer, a subscription to the Militant  and In Defense of the US Working Class  by SWP leader Mary-Alice Waters.

Waters describes why she joined the SWP, as “the mass Black proletarian movement fighting Jim Crow segregation in the U.S., combined with the example set by the workers and farmers of Cuba, instilled our generation with an unshakable confidence in the revolutionary capacities of working people.”

Candidates of the Democratic, Republican and other capitalist parties have disdain for our capacities. Liberals like Joe Biden especially pour scorn on the “backwardness” of workers and farmers who they claim are saturated with racist and reactionary politics.

Earlier this month Biden said he’s convinced up to 15% of all Americans — some 49 million — are “just not very good people.” But the scope of the recent protests shows the capacities of working people to engage in struggle in our own class interests, regardless of what Biden or Trump say or do.

Democrats seek to channel the widespread outrage felt by millions of working people over the cop killings of George Floyd, Breonna Taylor and many others off the streets and into the voting booth, to put their hopes on Biden getting into the White House.

SWP candidates point in the opposite direction — building on workers’ struggles to improve wages and working conditions and protests against the effects of capitalist exploitation. These fights deepen workers’ understanding of our common class interests against those of the bosses. More become open to seeing the need for a course of revolutionary struggle to end the oppressive social system that the rulers’ criminal “justice” system is organized to defend.

The party’s 2020 election platform advances proposals to strengthen the unity of working people as we combine together to resist the bosses’ attacks. The party calls for a fight to win amnesty for all workers in the U.S. without papers, to put all  workers in a stronger position to fight together.

The party’s platform points toward workers fighting to wrest more and more control of production out of the bosses’ hands, to prevent their incessant efforts to profit by jacking up line speeds, endangering our lives and limbs, and their utter disregard for the shoddy and often dangerous character of the products they churn out.

Amanda Allen, a social work student and former nurse, discussed with SWP member Hilda Cuzco what it will take to eliminate racism at a Juneteenth event in Dallas. Allen picked up four books on revolutionary politics and a Militant  subscription.

“Don’t start with Blacks as an oppressed nationality. Start with the vanguard place and weight of workers who are Black in broad proletarian-led social and political struggles in the United States,” SWP National Secretary Jack Barnes writes in one of the titles she bought, Malcolm X, Black Liberation, and the Road to Workers Power. “It’s the strength and resilience, not the oppression that bowls you over.”

The capitalist rulers organize the schools, all production and the media to try and make us believe we aren’t capable of running anything important ourselves. In contrast, when Malcolm X was asked by an interviewer if his goal was to wake Black people up to their exploitation, he replied, “No to their humanity, to their own worth and to their heritage,” Barnes says.

“When SWP campaigners said that the fight against cop brutality goes hand in hand with the fight for jobs, we found real interest,” Willie Cotton, the party’s candidate for Congress in the 9th District in New York, told the Militant  after campaign supporters there sold 72 books, 46 copies of the Militant and 27 subscriptions to the paper at two Juneteenth events.

Titles included books on the origins of women’s oppression and how to end it, books by leaders of the Cuban Revolution, and Teamster Rebellion, part of a four-book series by Farrell Dobbs. Dobbs was a leader of the strikes and organizing drives that transformed the Teamsters union in Minneapolis and across the Midwest in the 1930s, showing in life what workers and their allies can achieve when they have the leadership they deserve.

Central to building a fighting labor movement today is combating the impact on workers of the massive loss of jobs caused by the government shutdowns and efforts by the employers to restart production with fewer workers doing more for less. That’s why the SWP’s platform urges workers and our unions to fight for a government-funded public works program to put millions back to work at union-scale pay, to strengthen the unity of the working class and our ability to fight. This is the road to gain class-struggle experience and self-confidence.

The fight for jobs was at the center of many of the discussions Kennedy and Jarrett, the SWP’s candidates for president and vice president, had on a five-day tour stop in Illinois. They met with workers at the shift change at Rochelle Foods, a meat processing plant in Rochelle, and at the big Ford assembly plant in Chicago. Two workers at Rochelle got subscriptions to the paper and 20 at the Ford plant bought single issues.

In Staunton, Illinois, one of many small towns where protests against police brutality have been organized, Jarrett discussed what can be done to reverse the weakening of our unions with Larry Hanstein, a retired member of the Machinists. Jarrett explained the only way to transform the unions comes out of our struggles. “And the wave of protests responding to the killing of George Floyd in big cities and small towns can give impetus for change in the unions,” Jarrett said.

Hanstein agreed. “A true union has to depend on brother union members.” He took some campaign literature and bought a copy of the Militant.

On June 20 Kennedy joined a march of 200 people in downtown Chicago against cop brutality and spoke at the rally. “The size of these marches combined with the fights in the workplace will help us build a powerful movement,” she said. She described her visit to bring solidarity to striking fruit packing workers in Washington state, and the impact their victory had on their view of themselves and their ability to fight and make gains.

Campaigners sold 28 subscriptions and some 27 books during the Chicago-area leg of the tour.

Get involved! Contact campaign supporters in the area nearest you.

Naomi Craine in Chicago contributed to this article. 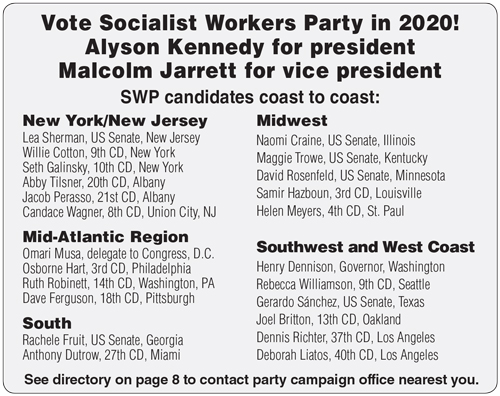 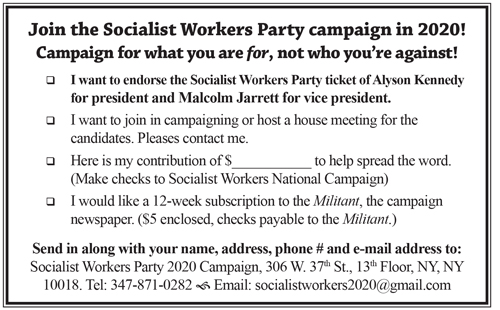 Join the 2020 SWP campaign! Back Bath strike, fight for jobs