LIVINGSTON, Calif. — Socialist Workers Party presidential and vice presidential candidates, Alyson Kennedy and Malcolm Jarrett, joined SWP Senate candidate Joel Britton and other campaigners here to speak with working people Sept. 6. Livingston is a town of 13,000 and home to a Foster Farms chicken-processing plant with 2,500 workers. The bosses shut down the plant Sept. 1 to 7 because of an outbreak of COVID-19 that left eight employees dead.

Government negligence in dealing with uncontrolled fires in northern California has worsened the impact of mass unemployment, a central part of the capitalist economic and social crisis.

Jarrett and Britton met two Foster Farm workers from Punjab, India. Their neighbor, Harpreet Kaur, who used to work in a cannery, translated.

One of the workers described how he was required to hang 34 chickens a minute for minimum wage. After he was injured on the job, the company blamed him for getting hurt and fired him.

“There is no reason for 5,000 workers to die every year on the job and for thousands more to be injured. It’s a product of the capitalists’ drive for profits,” Jarrett said. “That’s why workers need to take control of production and safety.”

Workers know how to work safely. “It’s the workers at Foster Farms who should decide the line speed, how far apart to work and other measures to protect their health from the virus,” Jarrett said. Kaur subscribed to the Militant.

Angélica Guevara told Kennedy about one of the worst days caused by a nearby fire. “The sky was thick with yellow smoke. I couldn’t breath,” she said.

Guevara recently moved here after being laid off from a hotel in San Jose, which shut down because of coronavirus. Livingston was the only place where she could now afford the rent.

“Under capitalism, working people are left to deal with the consequences of these types of disasters on their own,” Kennedy said. The media says the fires are just another “natural” disaster, but in reality this is a social crisis deepened by the dog-eat-dog capitalist system.

It was no secret that dry conditions and intense heat increased the fire danger. A government-funded public works program could have put tens of thousands of people to work at union-scale wages, clearing brush, replacing old electrical lines, and training personnel to make sure that any new fire could be isolated and brought under control.

“Everything is put on the backs of working people,” Kennedy said, from dealing with the virus pandemic to the fires. “Wealthy people in California have gone out and hired their own firefighting crews and they can afford to rent plush accommodations if they have to leave their houses. We’re forced to sleep in our cars if we have to evacuate.”

Kennedy also spoke with Marisela Rojas and Claudia Avino, restaurant workers who are cousins. Rojas said that their work hours had been cut and it was difficult to pay their bills.

“Wages should not be cut because of the economic crisis,” Kennedy said. “We say workers should fight for a shorter workweek at no cut in pay, to spread the work around.” Rojas and Avino subscribed to the Militant and bought The Clintons’ Anti-Working-Class Record by Socialist Workers Party National Secretary Jack Barnes.

“My father-in-law who lives with us is a farmworker,” Omar García told Kennedy in Half Moon Bay the day before. “He works year-round, 10 or more hours a day, six days a week, making $14 an hour. He gets no overtime pay, no sick days or holiday pay.”

“That’s why we are campaigning to help workers build a union movement in every factory, retail store and farm,” Kennedy said. “Farmworkers, like other workers, can come together to fight to change the conditions we face and win solidarity.”

The SWP candidates say the union movement needs to fight for a government-funded public works program to build and repair hospitals and day care centers, schools and improved housing for farmworkers, and put those without jobs to work.

García, who was born in Mexico, has lived in California for over 14 years. “I go to construction sites and fields and take care of the porta potties,” he said.

Workers in the U.S. and Mexico face similar conditions, he said. “There are rich Mexicans too who own big companies like Bimbo Bakery. I support unions. The best job in Half Moon Bay is working as a garbage collector because it’s a union job. They make more money and get better benefits.”

García said he was concerned about President Donald Trump’s push to build a wall at the U.S.-Mexico border. “Wall or no wall, the capitalists need immigrant workers,” Kennedy said. While the U.S. government has made it more difficult to cross the border, it has also increased the number of “guest worker” visas for Mexicans to work in the fields.

“They don’t want us to organize. They aim to divide workers by pitting immigrant and native-born workers against each other to better attack us all. That’s why we are for amnesty for all those without papers in the U.S.,” Kennedy said, “to unite the working class.” García got a copy of the Militant.

For more information on how to join the SWP campaign, see directory. 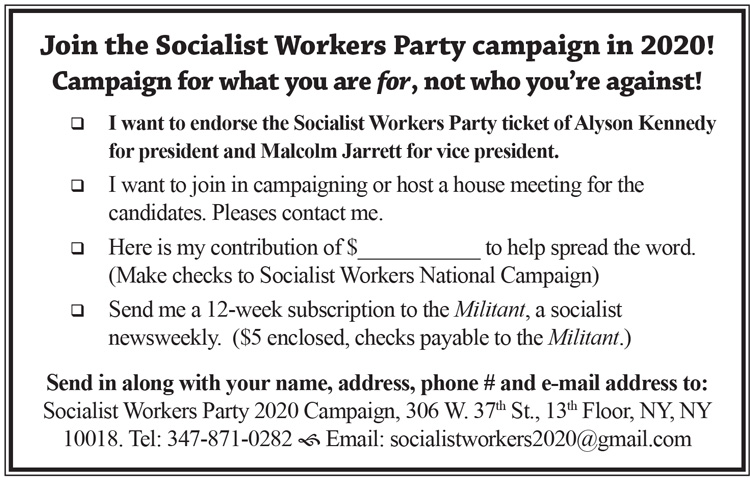 Build a union movement in all plants, workplaces!

Sept. 9 statement by Alyson Kennedy, SWP candidate for president. A fight by working people is needed to build a union movement in every workplace and to win immediate protection from the widespread unemployment and rising prices we face. Proposals…