Supporters of prisoners’ rights and freedom of the press continue to speak urging Florida prison officials to overturn the ban on four recent issues of the Militant.

“The Militant has a right to publish factual information, and Florida prisoners have a right to access the information,” wrote Fran Reilly, executive director of the News Leaders Association, in a Sept. 16 letter to prison authorities. “The impoundment infringes on the First Amendment rights of both the Militant and its incarcerated readers.”

“We urge the Literature Review Committee to reverse the decision,” she wrote.

The first issue was confiscated, prison officials at the Florida State Prison said, because of the article “Prisoners Demand Release from Overcrowded Jails” by Jeff Powers in issue no. 30. It describes efforts by prisoners, inmates’ family members and others urging the California state government to take steps to relieve the dangerous overcrowding in prisons there amid the COVID-19 pandemic, which was extensively covered by the media.

The article describes “how families of the incarcerated have peacefully called on leaders in the State to respond to the danger posed by COVID to their loved ones in prison,” wrote Dolores Piper in an Aug. 30 letter urging authorities to reverse the bans. She first became active in the fight against police brutality after her 15-year-old nephew, Derrick Gaines, was killed in 2012 by a South San Francisco, California,  cop. “This article and this publication do not encourage any kind of riots or rebellion in your facilities. 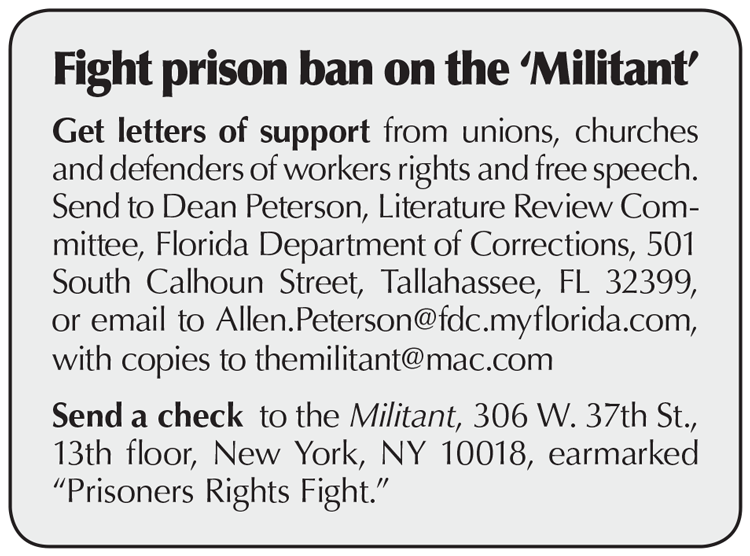 “Mr. Powers points out facts that should be important concerns for your staff members and your incarcerated persons,” Piper wrote. Prisoners “who subscribe to this publication do so to keep informed and encouraged.”

Also impounded were issues nos. 31, 33 and 34. Authorities claim that these issues are “dangerously inflammatory” and “advocates or encourages riot insurrection, rebellion, organized prison protest, disruption of the institution, or the violation of the federal law, state law, or Department rules.”

Issues nos. 33 and 34 were banned simply for reporting on efforts to reverse the impoundment of issue no. 30. Issue no. 31 was banned for an article that unambiguously opposed violence in Portland, Oregon, by both antifa and federal cops.

After the Florida Department of Corrections Literature Review Committee upheld the bans, Militant attorney David Goldstein filed appeals against these rulings, requesting they be overturned.

If the impoundment of an issue by one Florida prison is not reversed, the paper is then banned in all of the state’s 143 prison facilities.

The Militant has challenged the bans on over 40 issues of the paper in Florida prisons over the last seven years, and succeeded in overturning a large majority. In impounding Militant issues, prison officials refuse “to identify any specific material in an article that they find objectionable,” wrote Goldstein in his recent appeal, “or to give any explanation of what is objectionable and why.”

“I am writing to strongly object to your banning of recent issues of the Militant,” wrote Chris Pennock, a National Association of Letter Carriers union steward in Minneapolis. “Workers who are in prison have just as much a right as you or I to read newspapers of their choice.”

The banning of the paper is “a serious attack on freedom of expression which is highly valued in many countries around the world,” wrote the African Diaspora Association of Canada, which groups together different African organizations in Canada.

Other groups that have sent letters calling for lifting the ban include the Florida Press Association, Amnesty International USA, American Civil Liberties Foundation Florida, Reporters Committee on Freedom of the Press and PEN America. A growing number of individuals have done so as well.

“These letters let prison officials know the support that exists for the rights of the paper and our inmate subscribers,” said Militant editor John Studer. “We need more to press them to overturn their ban.”

“At stake is the constitutional right of the Militant to publish its point of view,” he said. “The Militant will not back down from defending the right of prisoners to read different views, to think for themselves and form their own opinions.

“The deepening capitalist crisis impacts workers whether behind bars or anywhere else, leading to growing interest in a paper published in the interests of working people. Our subscription list in prisons across the country is growing,” Studer said.

Letters protest Florida’s ban on the ‘Militant’ in state prisons

Florida prison officials have banned four recent issues of the Militant, preventing them from reaching dozens of subscribers behind bars. The Militant  is urging supporters of freedom of the press and prisoners’ rights to join in pressing Florida Department of…