The pressing need for working people to join together to fight the impact of an unprecedented economic and social crisis caused by the dog-eat-dog capitalist system becomes more evident as joblessness mounts, lines expand at food banks and millions of workers face a for-profit health industry incapable of providing the medical care we need as a deadly pandemic continues.

Both President Donald Trump and Democratic challenger Joe Biden say they’re the best candidate to look after “our” problems. But there is no “we.” They are both loyal servants of a capitalist class that is determined to reverse its declining profit rates at our expense, while working people can only protect ourselves by organizing together to stand up to the growing attack by the bosses and their government.

Neither the Democrats nor Republicans offer proposals to create the tens of millions of jobs that workers need today above all. Nor do they have proposals to make the successful drug cocktail given to Trump available now  to all those who get COVID-19.

The Socialist Workers Party campaign offers a road forward to build a working-class movement of millions to challenge the rule of the exploitative capitalist class. We urge workers and our unions to fight for a shorter workweek with no cut in weekly take-home pay  to spread available work around and stop layoffs. For a government-funded public works program to create jobs at union-scale pay, to build hospitals, housing, schools, and many other things workers need.

We say working people can only rely on ourselves. In the course of our struggles we will build a fighting union movement and transform ourselves, becoming more self-confident and class conscious.

Working people need to fight for what we need, not what the bosses and their parties say is “possible.” We need to speak out in the interests of working farmers, who face debt slavery and ruin in rising numbers, and to rally all those exploited and oppressed by capital.

To advance these fights, workers need our own political party, a labor party based on a fighting union movement, to organize working people to take power out of the hands of the capitalist class and replace their rule with a workers and farmers government.

The revolution made by working people in Cuba, led by Fidel Castro and the July 26 Movement, provides a powerful example of what our class can do. Wielding our own government, we have the strongest possible tool in fighting to rid the world of racism, women’s oppression and all the inequities the capitalists make use of.

When the coronavirus hit Cuba, the revolutionary government organized students and other volunteers in their thousands to carry out daily house visits, especially to the elderly, to see if they needed care. In contrast to capitalist governments around the world, everyone in Cuba who got sick received immediate medical attention, free of charge. No one is left on their own, and everyone gets the best they have to offer. Cuba has the lowest COVID-19 death rate in the world.

The U.S. rulers fear the formidable example provided by Cuba’s socialist revolution. Both Biden and Trump promote the U.S. rulers’ economic war on the Cuban people, to punish them for setting an example that it is possible for working people to replace capitalist rule with something that is better.

Join us campaigning for the SWP, the only party that offers a revolutionary way forward. Help expand the circulation of the Militant. Look forward to continuing to build a fighting working-class movement after Nov. 3. 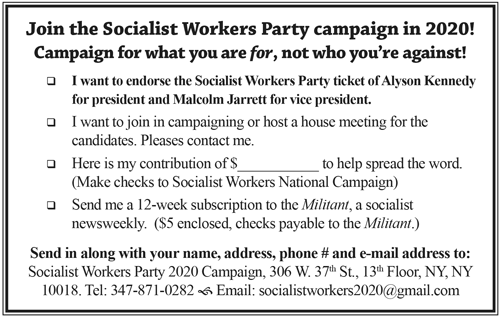 Workers need our own party, a labor party!

Whichever capitalist political party wins the presidency Nov. 3 — the Democrats with Joseph Biden or Republicans with Donald Trump — tens of millions of workers are going to face the same deep economic, and moral crisis the day after…