NEW YORK — “Over the next 16 days the Socialist Workers Party presidential ticket and its 23 other candidates will boldly present a revolutionary working-class platform as we reach out to workers and other exploited producers,” Alyson Kennedy, the party’s candidate for president, told the Militant Labor Forum here Oct. 17.

“We propose immediate demands to defend and advance the struggles of working people as the economic and social crisis of capitalism wreaks havoc with our lives,” she said.

Along with the campaign running up to the Nov. 3 elections, SWP members are carrying out an eight-week drive to expand the readership of the Militant  and books by SWP and other revolutionary leaders. This effort — joined by the Communist Leagues in Australia, Canada, New Zealand and the United Kingdom — will run until Nov. 24. The Socialist Workers Party also has launched its annual Party-Building Fund to collect $120,000.

“Joe Biden says he will rebuild the economy,” Kennedy said. “But then a week later he said he’ll shut down the entire country if the ‘experts’ tell him that’s how to stop the virus.” That would add yet more devastation for working people.

“President Trump claims he has produced the most successful economy in the history of the country,” Kennedy noted. “Successful for whom? Not for the millions out of work, or for those still holding a job with hourly wages and working conditions under assault by the bosses.”

“It’s better to vote for what you want and not get it, than vote for what you don’t want and get it,” Kennedy said. For those who look at both Biden and Trump and can’t stomach either, “we ask you to endorse and get active in the SWP campaign.”

Pointing to the example of the Cuban Revolution, the SWP presidential candidate said, “Fidel Castro led working people to recognize themselves as actors, not subjects — they are the changers of the world and can accomplish what others deem impossible.”

Kennedy and running mate Malcolm Jarrett campaigned here and in northern New Jersey Oct. 13-18, talking to taxi drivers waiting for fares, Walmart workers, construction workers on their lunch breaks, waitresses and other workers on their doorsteps.

The SWP candidates get a serious hearing. They raise the need for workers and our unions to fight for a government-funded public works program to put the unemployed to work at union-scale wages and for unemployment benefits for all those who are without jobs, for as long as needed, whether they have “work” papers or not. Workers everywhere need an escalator clause in their contracts, the SWP campaign says, ensuring that when prices go up, wages go up to match, so workers don’t fall further behind.

In Goshen, a rural town surrounded by farms an hour and a half north of New York City, Kennedy knocked on the door of James Roberts, 59. He told Kennedy that he was just laid off from his accounting job after 25 years working for the same company.

“I sat out the 2016 election,” he said. “I didn’t like Trump or Hillary Clinton. But this time, Trump is so bad, I’m leaning toward Biden, even though I don’t find him compelling. Then again, I might just sit it out again.” 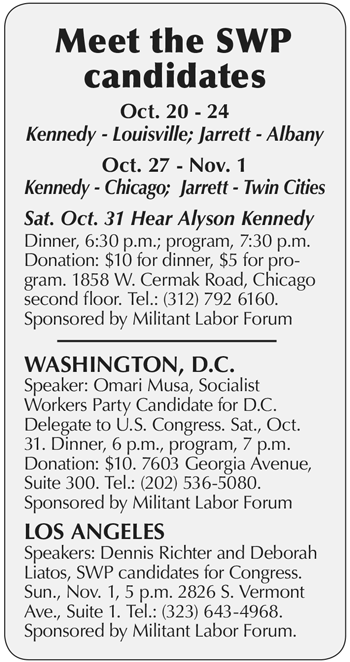 “I wouldn’t expect them to,” Roberts said. “It’s more of a question of which one do you dislike more.”

Kennedy pointed out the party’s platform and its demands to create jobs and cut the workweek with no cut in pay.

“It will take a fight,” Kennedy said. “And it will take building a labor party that organizes independent of the Democrats and Republicans.”

Roberts wasn’t convinced, but he asked how he could vote for Kennedy, if he changes his mind.

Campaigners and candidates have also met workers who say they’re voting for Trump but take the SWP’s campaign literature to learn more about a working-class alternative to the bosses’ two parties.

Some workers are affected by the all-out hysteria in the liberal-dominated media that Trump must be defeated at all cost. When Kennedy and Jarrett spoke with taxi drivers outside Penn Station in New York, they met one driver who said, “Third party? Not this year!” He said the SWP would take votes from Biden.

But his eyes lit up when he saw that the campaigners had a copy of We Are Heirs of the World’s Revolutions by Thomas Sankara, who led a revolution in Burkina Faso from 1983 to 1987. Sankara mobilized working people in an uncompromising struggle against hunger, illiteracy, economic backwardness and women’s oppression in one of the poorest country’s in the world. “We’re putting forward a program to organize and mobilize workers and farmers to fight, just as Sankara did,” Kennedy said.

The driver bought the book and took a copy of the campaign platform to think about.

Union taxi dispatcher Jerome Duncan told Kennedy and Jarrett that he has not worked a full 40-hour week since the start of the pandemic. “They had us on Workshare,” Duncan said. “Instead of five days, we worked four and a half or three and a half. Workshare would give you money to make up some of the difference, but not all of it.”

The government-funded Workshare program allows bosses to make those they hire eligible for reduced unemployment benefits, when their hours are cut.

But now the Workshare money has run out and the dispatchers are working fewer hours without the additional compensation, Duncan said.

“We’re for cutting the workweek with no cut in pay,” Kennedy said. The government’s Workshare program is just a ploy to get workers to accept less pay, while promoting the illusion that “we’re all in this together.”

“Our party is for immediate and continuing relief for as long as people are out of work,” Kennedy said.

“Yes, immediate,” Duncan agreed. “This is real talk. If a person can’t feed your family, you’ll do whatever you have to do.”

“We have to rely on ourselves,” Kennedy said. “None of the capitalist candidates can do it for us.” Our conditions change “when working people stand up and fight, like we did during the civil rights struggle in the 1950s and ’60s.”

“We need to come together,” Duncan said. He exchanged numbers with campaigners to stay in touch.

A few hours later, vice presidential candidate Jarrett spoke with construction workers in nearby Hudson Yards on their lunch break. He told them about his discussions with the cab drivers.

“The bosses use everything they can to divide us,” Jarrett said. “But all drivers — yellow cab, Uber, Lyft, and others, whether they own or rent their vehicles — need to organize into one union.

“The situation is very bad,” Charest said. “But it’s not too late to turn it around. All the different unions have to stick together.”

One construction worker got a Militant  subscription and a number got single copies and took campaign flyers.

On the first day of their New York-New Jersey tour, Kennedy and Jarrett were interviewed by Enoch Faustin and Gerald Charleston on Radio Olivier, an internet radio station affiliated with the predominantly Haitian Mount Olive Church of God in Orange, New Jersey.

The several hour interview covered everything from the fight against police brutality to the example of the Cuban Revolution. When asked what the candidates thought about the Affordable Care Act, Kennedy replied, “It’s been a boon for the health insurance companies.”

Pointing to the need for working people to fight for the health care we need, Kennedy cited the strike by miners across the country in 1981, when the government tried to cut benefits for miners who contracted the debilitating black lung disease. “Health care should be a right not a privilege,” she said.

In the face of the coronavirus pandemic, she said, “the package of drugs that President Trump was given should be made available to everyone, starting with the most vulnerable.”

Cuba is an example of what is possible, when working people make a revolution and take power out of the hands of the capitalist class, Kennedy said. “In Cuba the entire population was mobilized to deal with the virus. They have health care, not health insurance.”

After the interview, Faustin bought a copy of The Jewish Question: A Marxist Interpretation by Abram Leon and The Turn to Industry: Forging a Proletarian Party by Socialist Workers Party National Secretary Jack Barnes.

One indication of the interest in the SWP and its campaign is that as of Oct. 20 supporters of the paper around the world have already sold 537 subscriptions and 439 books, well on the way toward the quota of 1,200 each. In addition $23,138 in fund contributions have come in.

To help campaign, to join the drive to win new readers to the Militant  and revolutionary books or to contribute to the Party-Building Fund, see the directory for the party branch nearest you.

Seth Galinsky is the SWP candidate for Congress in the 10th District in New York. Lea Sherman, the party’s candidate for U.S. Senate in New Jersey, contributed to this article. 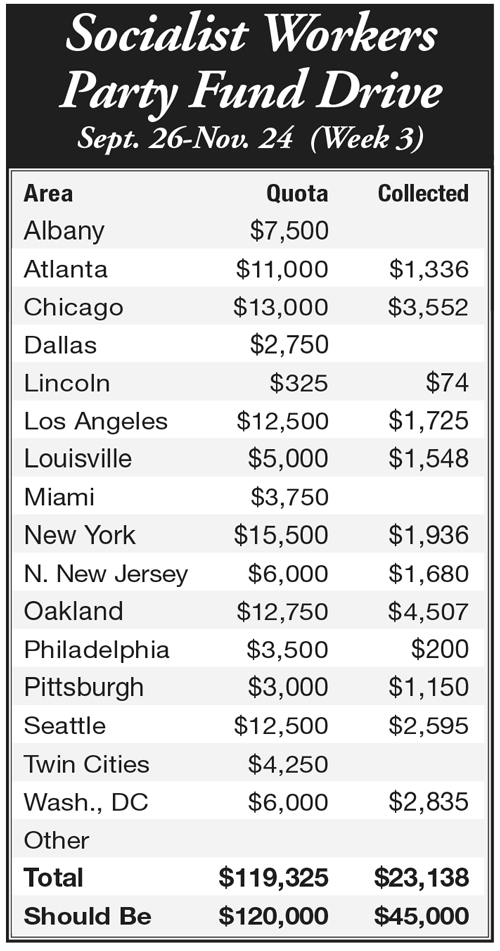