Members of the Socialist Workers Party and the Communist Leagues in Australia, Canada, New Zealand and the United Kingdom are in the final stretch of the fall 2020 international drive to expand the circulation of the Militant. They are organizing to go over their goals of selling 1,200 subscriptions and the same number of books by SWP leaders and other revolutionaries by the time the drive ends Nov. 24.

The interest among working people in the Militant  and books — as well as contributions to the SWP’s $120,000 Party-Building Fund, which is organized simultaneously with the drive — reflects the growing desire to learn more about the roots of the capitalist economic and social crisis and what can be done to defend our interests. Because of this, quotas are higher than during the party’s spring drive.

The Socialist Workers Party 2020 ticket, headed by Alyson Kennedy for president and Malcolm Jarrett for vice president along with a couple dozen local candidates, set an example of what is possible when working people organize independently of the capitalist parties. They won respect while campaigning on doorsteps, at taxi lines, Walmart parking lots, factory gates and labor actions, even in the first weeks of the pandemic lockdowns, telling the truth about what workers face and explaining what we are capable of fighting for.

“The party’s 2020 election platform remains a powerful tool,” SWP Los Angeles branch organizer Norton Sandler told the Militant. It’s not a set of ideas to win votes, but an action program with demands that workers and our unions can fight for today. From a public works program to put the unemployed back to work at union-scale wages, to cutting the workweek with no cut in pay to prevent layoffs, its proposals are aimed at preventing the bosses from putting their crisis on our backs.

“We’re using back issues of the Militant  with the action program in it, to good effect,” Sandler said. He and Freddy Huinil used those issues to talk to working people at a Walmart parking lot last week and sold two subscriptions and three books.

In New York City’s Lower East Side, SWP member Tamar Rosenfeld spoke with a health care worker who belongs to 1199SEIU union. He described how bosses at the health facility where he works have been laying off workers despite the desperate need for more health care facilities during the pandemic.

How do we get to a labor party?

“I told him we need a labor party based on fighting unions,” Rosenfeld said. “Not a vote-catching machine, but an instrument of the working class that we can use to debate, decide and organize year-round to fight for things we need.”

When he asked how that can be accomplished, Rosenfeld said it would come out of labor battles as more workers come to realize from those experiences that they need a party of their own.

Rosenfeld reports he subscribed to the Militant, got a copy of Are They Rich Because They’re Smart?  by SWP National Secretary Jack Barnes and gave $5 “for the movement.” Then, just before she left he contributed a further $5.

In Georgia, U.S. Senate races are going to a Jan. 5 runoff election. Rachele Fruit, Socialist Workers Party candidate for U.S. Senate there, will keep campaigning, distributing the party’s platform and encouraging working people to break from the Democrats and Republicans and build a movement capable of taking political power into our own hands.

“We’re continuing to get a great reception,” Fruit told the Militant  Nov. 17.

Around the country Socialist Workers Party branches are looking toward running candidates for mayor, governor and other offices that come up for election in 2021, efforts that will strengthen the party’s year-round work.

Many of the workers subscribing to the Militant  and getting books by SWP leaders and other revolutionaries want to contribute to the Party-Building Fund when they hear about it. 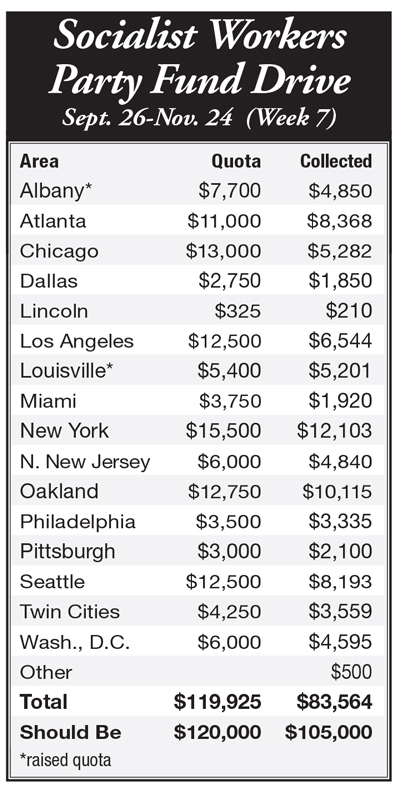 In Georgia, party members are “becoming more alert to the opportunities to win contributions when campaigning at workers’ doorsteps,” Lisa Potash, Atlanta fund organizer, told the Militant. “We decided to ask more workers to contribute when we knock on their doors and set a goal of raising $100 this way. We have about $80 in hand so far.”

From Louisville, Kentucky, Ned Measel reports, “The number of first-time contributors is up to 19, including four Walmart co-workers and 10 people who kicked in after we discussed politics with them on their doorsteps.”

Measel said the “second wave” of COVID cases in Kentucky and across the country makes many workers receptive to the party’s call for workers to fight to take control of production, including all aspects of health and safety, out of the bosses’ hands and for mass production of the latest medications to be administered at no cost to those afflicted with the virus.

Members of the IUE-CWA at the large GE appliance complex in Louisville bought 13 copies of the Militant  from SWP members distributing the paper at a shift change Nov. 13. The union members have voted down the company’s contract offers twice in the last two months. (See article on page 5.)

After the drive ends, party branches will continue bringing the Militant  and books by revolutionaries to workers, farmers and small proprietors across the country and building solidarity with strikes and social struggles. To join the efforts or to make a fund contribution contact an SWP branch near you.