Socialist Workers Party candidates and campaign supporters are meeting growing numbers of working people who are looking for ways to resist the impact of the capitalist crisis. Many are interested in discussing the SWP’s program for fighting to defend working-class interests.

“Neither the Democratic nor the Republican party is any good for the people,” Benito Cohate, one of the 1,400 Teamsters on strike for better wages and conditions at New York City’s Hunts Point Produce Market, told this worker-correspondent Jan. 17, during a solidarity rally there. “We need candidates that come from below.”

Cohate was interested in the SWP’s call for workers to build a labor party, based on our struggles for jobs, better wages, conditions and unions. Such a party would act to raise workers’ confidence and explain that through revolutionary struggle working people in our millions can replace capitalist rule with a government of our own.

Róger Calero, SWP candidate for mayor of New York, told Cohate that he had come to the rally to offer solidarity with their fight and learn more about the conditions they face. Calero asked him about safety at his job.

“There’s a lot of injuries,” Cohate replied. Customers walk around the areas where workers are stacking and processing the produce and bosses do little to safeguard them. “Just the other day a pallet stacked with produce fell on a customer.”

“That’s one reason why workers need to take control of production into our own hands,” Calero said. Workers, not the bosses, deciding the pace of production and how work is organized is key to defending our lives and limbs and those of customers. Cohate got a copy of the Militant and the campaign platform and arranged to stay in touch.

Calero is part of a national slate the SWP is running around the country that also includes Willie Cotton for New York City public advocate.

Later in the day, Calero spoke in Manhattan with a half-dozen “deliveristas,” while they were waiting for orders to deliver food and groceries through app-based companies like Relay, Uber Eats and others. They were pleased to hear the produce workers at Hunts Point were standing up to the bosses.

The number of deliveristas has mushroomed over the last year to 80,000 in New York City, a result of the pandemic shutdowns and ban on indoor dining.

Hundreds of deliveristas marched in the city Oct. 15 for better pay and conditions. Calero said that protests like this build solidarity among other workers and point the way forward for building a union to advance workers’ demands.

The SWP campaign is raising proposals that working people and our unions can fight for today.

“The fight for a government-funded public works program to put millions to work with decent wages is key,” Calero says. “It could be used to repair the infrastructure and build the hospitals, child care centers, schools, bridges and mass transit for a start.”

Wherever there are threats of layoffs, workers should demand that work hours be cut — with no cut in take-home pay — to spread around the available work.

The drive to get new subscribers of the Militant to renew and efforts to expand the circulation of books by SWP leaders and other revolutionaries and win a wider hearing for the party’s election campaigns reinforce each other.

Julio López immediately pulled out $20 to renew his subscription for six months when SWP campaigners met him at his apartment in Manhattan Jan. 10.

López first subscribed at a protest against police brutality in the summer. He is a strong supporter of independence for the U.S. colony of Puerto Rico, where he was born. He told SWP campaigners that his father, who has faced more than one layoff, voted for Donald Trump, largely because of his promise to “bring back jobs.”

López was surprised when SWP campaigners told him that among those who have subscribed to the Militant are workers who voted for Trump, as well as Joe Biden, or didn’t back either of the two main capitalist party candidates.

He decided to buy The Clintons’ Anti-Working-Class Record: Why Washington Fears Working People by SWP National Secretary Jack Barnes after we told him the book offered the clearest explanation anywhere of the conditions that led millions to vote for Trump, and why working people need to break from both bosses’ two parties and build one of our own.

‘Workers need to defend ourselves’

Williamson showed Ramos the paper’s coverage of the victory in Argentina legalizing abortion. “If you don’t want to have kids, a woman has to be careful,” Ramos replied. Smith said the decision about whether to have a child should rest with the woman alone. When Williamson described the number of women in Argentina who had previously died from botched, illegal abortions, Ramos was taken aback. She took that issue of the paper to read more about this.

Like thousands of hotel workers around the country, Ramos was laid off from where she had worked for 12 years when it closed temporarily. She hasn’t been called back. “They said they want to hire ‘new people.’ We know it’s so they can pay them less and work them harder than people who have been working there many years,” Ramos said. “But we are workers, and we need to defend ourselves.”

Ramos renewed her subscription and told Williamson and Smith that she plans to show the Militant to a co-worker she thinks will want to subscribe at her new job at a vegetable produce market.

Socialist Workers Party campaigners from Atlanta and Louisville, Kentucky, went to Bessemer and Hueytown, Alabama, Jan. 13-14. As they met workers on their doorsteps they spoke about the need to support the unionization drive at the nearby Amazon warehouse. They sold three introductory subscriptions to the Militant, including to a Home Depot worker, who has friends working at Amazon. He was glad to hear about the fight for a union.

Jerry Burns, an Amazon worker who bought a Militant subscription during the party’s visit to Bessemer in December, told SWP members Susan LaMont and Kaitlin Estill that he will renew soon. “My grandmother is reading it every week too,” he said, with a smile.

Amazon worker Sharon Franklin, a 26-year-old union supporter, subscribed to learn more about what workers around the country and the world are doing. She was interested in Estill’s description of the 10-month fight in Louisville against the cop killing of Breonna Taylor.

Want to help get the Militant around or campaign for the SWP’s candidates? See directory for the Socialist Workers Party and Communist League branches nearest you. 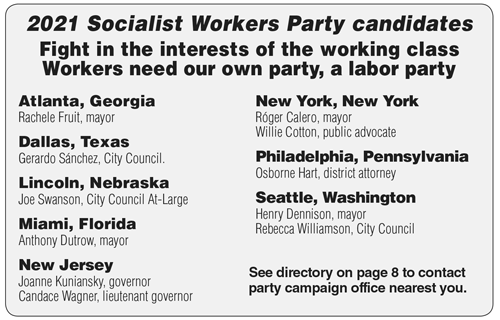 Workers need our own party, a labor party!

Millions remain out of work, with fresh unemployment claims rising to 965,000 in the U.S. for the week of Jan. 14, the highest since August. Hardest hit continue to be hotel, restaurant and other service workers, with many of these…