BY MAGGIE TROWE
I urge Militant readers to buy, read and study the new Pathfinder edition of The Jewish Question: A Marxist Interpretation.

The murderous attack on Jews at the Kosher deli in Jersey City in December 2019, the cold-blooded massacre of Jews at the Hyper Cacher kosher supermarket in Paris in 2015 and other acts of anti-Semitic violence shattered the illusion of many that virulent Jew-hatred ended with the fall of the Nazi regime. Or that it is only a minor question today. 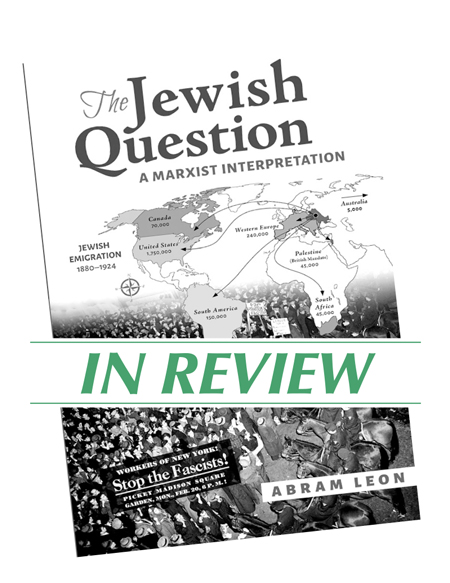 Why does Jew-hatred persist and how can it be eradicated? This book, kept in print and actively distributed since 1950 by the Socialist Workers Party, answers those questions and shows the road to ending the national oppression of the Jews, which along with the fight for Black emancipation, is an essential component of the coming American revolution.

Abram Leon, a communist and a Polish-born Jew, wrote the book as he took part in leading the underground working-class movement in Nazi-occupied Belgium in the 1940s before being captured by the Gestapo and sent to his death in the Auschwitz gas chambers.

In the crucible of war and pre-revolutionary turmoil, Leon, who had been a teenage leader of a socialist Zionist youth group, went through a rapid political evolution. “Under the impact of the sharpening class struggle … he broke with its political course and led a fight to win its members to the communist program of the world movement led by Leon Trotsky,” the biography of Leon in the book explains. He was only 26 when he died in 1944.

Capitalism and the Jewish question

I was born five years after 6 million Jews were killed under the Nazi-organized Holocaust. My Jewish father and Christian mother gave their bookworm daughter The Diary of a Young Girl by Anne Frank, which chronicles a Jewish teenage girl and her family hiding from the Nazis in Holland in 1942. They also gave me The Wall, John Hersey’s historical novel about the heroic 1943 uprising of Jews in the Warsaw ghetto. The books gnawed at me. I preferred the one about fighting to the one about waiting to die. But they didn’t help me understand why the Jews are persecuted or what to do about it.

That’s the most important reason to study The Jewish Question.

Leon explains that “the profound roots of twentieth century anti-Semitism” were not a “German” or “Hitler” phenomenon, but a product of the rule of the capitalist class and will continue to be a threat as long as dog-eat-dog capitalist social relations dominate.

He chronicles the relationship of Jews to other classes over earlier social stages of human development, explaining that under Greek and Roman rule through the end of antiquity and into the feudal era Jews occupied a distinct social niche, with Jewish merchants thriving. “Jews are historically a social group with a specific economic function. They are a class, or more precisely, a people-class,” Leon writes.

He describes how Jewish merchants also became money-lenders under feudalism and developed economic relations with kings, nobles, artisans and peasants, and the incipient bourgeoisie.

What changed? Capitalism emerged to replace feudalism as the dominant form of class society and exploitation. “It is only from the twelfth century on, parallel with the economic development of Western Europe, with the growth of cities and the formation of a native commercial and industrial class, that the condition of the Jews begins to worsen seriously, leading to their almost complete elimination from most of the Western countries,” Leon writes. “Persecutions of the Jews take on increasingly violent forms.”

As capitalism became dominant, a social differentiation began among the Jewish people and consequently the coming apart of the people-class. For the first time in centuries, a Jewish working class was created, including in garment and textile. And there was a mass emigration of persecuted Jews from backward Eastern Europe, particularly to the U.S.

“By socially differentiating Jews, by integrating the latter into economic life, and by emigration,” Leon says, “capitalism has laid the bases for the solution of the Jewish problem.”

But crisis-wracked capitalism couldn’t assimilate the Jews. “The fearsome crisis of the capitalist regime in the twentieth century has aggravated the plight of the Jews to an unparalleled degree,” Leon writes. And the capitalist rulers found they needed anti-Semitism and Jew-hatred to survive.

This reached a deadly high point with the victory of fascism in Germany and that regime’s use of anti-Semitism to win over millions of ruined middle-class people and sections of the demoralized working class after openings for a proletarian revolution there were destroyed by the counterrevolutionary policies of the Stalinists and Social Democrats.

This led to Hitler’s “Final Solution.”

Though Jew-hatred has declined among working people today, anti-Semitism remains a crucial tool the capitalist rulers will employ when social crisis again creates a pre-revolutionary rise of working-class resistance. Studying Leon’s book and fighting all acts of Jew-hatred remains crucial for the working-class movement.

Workers in their millions must fight and speak out against all forms of oppression and exploitation under capitalism, along a course of action toward taking political power into our own hands. This is the road toward winning the ruined small proprietors to see their salvation in a workers and farmers government.

There can be no revolution in the United States without resolving the Jewish question, just as working people in the United States cannot establish a workers and farmers government capable of ending the dictatorship of capital unless the fight against the national oppression of 44 million African Americans is a central part of the struggle.

Understanding and acting on the fight against Jew-hatred in the U.S., where there are nearly 7 million Jews — more than in any other country, including Israel — is a life-or-death question for the working class.

As is the fight for Black liberation. In Malcolm X, Black Liberation, and the Road to Workers Power, SWP National Secretary Jack Barnes writes that the history of the African American struggle proves “that workers who are Black will comprise a disproportionately weighty part of the ranks and leadership of the mass social movement that will make a proletarian revolution.”

The solution to national questions can only be posed by the working class, Barnes explains. Leon’s book makes a similar case. “When the people of the factories and the fields have finally thrown off the yoke of the capitalists, when a future of unlimited development opens up before liberated humanity, the Jewish masses will be able to make a far from unimportant contribution toward the building of a new world.”

The Socialist Workers Party can take pride in its record on both questions, from the founding documents of the SWP in 1938-39 that included “Theses on the Jewish Question”; to campaigning for unrestricted immigration of Jewish refugees as the U.S. rulers shut the country’s doors; to organizing the February 1939 “Stop the Fascists” rally of 50,000 outside a pro-Nazi mass meeting in New York; to promoting study of The Jewish Question today.

Party leaders knew the importance of Leon’s work. Merchant Marine party members who sailed to Europe helped obtain the manuscript and bring it to the U.S. The party has kept it in print since. You’ll see how important that investment of resources was when you read The Jewish Question. It can be ordered for $17 at www.pathfinderpress.com.