LINCOLN, Neb. — Supporters of the Socialist Workers Party campaign launched a drive to get Joe Swanson, the party’s candidate for City Council At-Large, on the ballot over the Feb. 6-7 weekend.

Amid snow and an arctic blast, campaigners talked to working people at their apartment doors about the party’s program and activity. City officials informed Swanson Feb. 9 that 126 of the signatures the campaign turned in after the weekend out of the requirement of 150 are good. That means 24 to go!

Swanson “is a longtime fighter for the unions and a retired rail worker,” Ilona Gersh told university student Tiffany Hall Feb. 7. “I’m from a union family,” said Hall. “My father is a retired locomotive engineer. We hate the way the railroad treats its employees.”

“The bosses want to produce more with less people,” Gersh said. “At the same time, there are millions of unemployed workers. The Socialist Workers Party calls for a shorter workweek with no cut in pay, to spread the work around.

“I work one full- and two part-time jobs just to pay my tuition and living expenses,” Hall said. “College students who are listed as dependents don’t even qualify for the stimulus checks.”

“The stimulus checks come and go,” Gersh said. “But they don’t change our fundamental living conditions.

“The working class and our unions need to fight for a massive, federally funded public works program to put millions to work at union-scale pay, to produce what the working class needs,” Gersh added. The only way to get these things is for working people to stand up and defend each other from the bosses’ attacks.

Hall signed to put Swanson on the ballot.

“Working people are growing more aware of the dead end of capitalist politics, the to-and-fro between the bosses’ two parties, the Democrats and Republicans,” Swanson said at the campaign’s first public meeting Feb. 6. “They are more open to hearing about the road forward that our action program presents.

“It begins with the understanding that the need to strengthen our unity and solidarity on the job, with organizing the union of the workers.

“And we need to fight for workers to take control of production,” Swanson said.

“I got my first taste of what workers control can mean when I hired in on the railroad,” he said. “The yardmaster tried to assign me — with three days on the job — and two guys who had just hired in that day to work a train by ourselves.

“A veteran worker stepped in to tell the boss that if he wanted to get anything done that day he had best assign the actual work to experienced crews and let the new guys practice somewhere safe. The boss backed down. That made a big impression on me.”

Swanson added, “A good example of why we have to fight for workers control of production is the fight to stop the AltEn plant in nearby Mead from polluting the land and water in surrounding communities.”

AltEn converts pesticide-contaminated corn seed into ethanol. It has discharged thousands of pounds of toxic waste into overfilled lagoons, and distributed some as a “soil conditioner,” posing a threat to people in the town of 500 and to nearby wildlife. After an outcry from Mead residents, the Nebraska Department of Environment and Energy ordered the plant closed Feb. 4.

Among the speakers at the meeting was Lance Anton, a freight conductor and member of the SMART-TD union.

Anton described the conditions bosses on the railroads impose on workers. “They run two-and-a-half-mile-long trains that can block vital roadways for 45 minutes or more, placing entire communities in danger,” he said. He described his experiences on the job standing up to the bosses’ attempts to press new hires to work in unsafe conditions.

“That’s why I go to bat for Joe. We need more like him.” Over the previous week, Anton collected 39 signatures from co-workers and others to help put Swanson on the ballot.

An alliance of workers and farmers

“Increasing numbers of working farmers are losing their land under crushing debts,” Swanson noted, “while Microsoft founder Bill Gates has become the largest owner of farmland in the country, including 20,000 acres in Nebraska.”

“We need a fighting alliance of workers and farmers and ultimately the formation of a workers and farmers government to take political power out of the hands of the ruling capitalist families,” Swanson said. It would “nationalize the land, guaranteeing its use by those who live on and till it, not ‘repo’ foreclosures by absentee bankers, landowners, or capitalist farmers.”

This is an international fight, Swanson said, pointing to the monthslong protests by farmers in India to defend their livelihoods, that deserves solidarity from working people around the world.

Swanson described the example set by working people in Cuba who made a socialist revolution in 1959. Since then “the revolutionary leadership in Cuba has relied on the mobilization of workers and farmers to meet every social and economic challenge they have confronted,” Swanson said, “and they’re doing the same in face of the pandemic today.”

Nick Neeser, a campaign supporter from Minneapolis, described discussions with workers about the party program at their doorsteps, building support for striking Marathon Petroleum refinery workers in St. Paul Park, Minnesota, and joining protests against the death penalty in Terre Haute, Indiana.

A second weekend of campaigning to go well over the top and win support for the SWP campaign will take place Feb. 20-21. To help, contact the Socialist Workers Party in Chicago, Lincoln or Twin Cities. 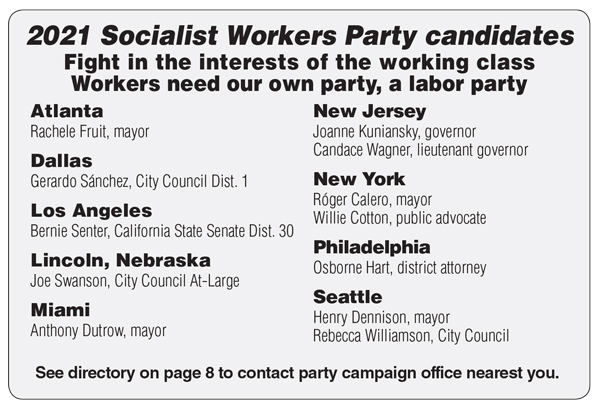 ‘The ‘Militant’ lets me know what workers are doing’

CINCINNATI — “I want to keep getting the Militant. I generally don’t read newspapers, but the Militant is different — the articles let me know what workers are doing all over,” Rubeisha Gaines, a nursing student, told this worker-correspondent as…