Supporters of the campaign of Joe Swanson, the party’s candidate for City Council in Lincoln, Nebraska, will finish collecting signatures needed to get on the ballot over the Feb. 20 weekend. Swanson will speak at a Lincoln campaign forum that day in support of locked-out Marathon oil refinery workers in Minnesota.

“SWP candidates champion the struggles of working people here and around the world, point to the example they set and are using their campaigns to build much-needed solidarity,” John Studer, the party’s national campaign director, told the Militant  Feb. 16. “From workers locked out at the Marathon oil refinery in Minnesota, to farmers in India fighting laws that threaten their livelihoods, the party’s candidates explain what is at stake in these struggles and urge everyone we meet to back them.” 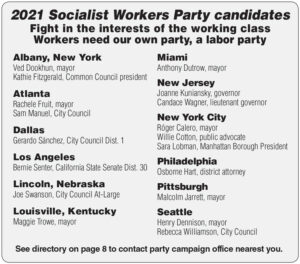 Supporters of the campaign of Rachele Fruit, Socialist Workers Party candidate for mayor of Atlanta, have been getting out the word about the fight to get a union at the Amazon warehouse in Bessemer, Alabama. Solidarity from workers and unions around the country can put workers there in a stronger position to win union representation. (See article on page 5.)

On Feb. 13 Fruit visited Tamika Lewis, a carpenter who subscribes to the Militant  and previously worked at the Gresham Walmart in Atlanta.

After hearing more about the union- organizing drive at Amazon, she renewed her subscription.

The paper “talks about things they try to keep covered up, like where people are trying to get together and do something about their situation,” Lewis told campaign supporter John Benson. “We have to learn about our history and from our history. Different generations need to come together, not blame each other. That’s what will keep the fight going!”

Róger Calero, SWP candidate for New York mayor, is using his campaign to build support for a Feb. 20 demonstration in Queens in solidarity with those fighting against the military coup in Myanmar.

“Campaign supporters are calling working people we know to encourage them to go to the protest,” Calero said. “We’re talking to people we’ve met at rallies in solidarity with Indian farmers, to union members we met during the recent strike at the Hunts Point Produce Market and to Militant  subscribers.”

“We tell them their solidarity can reinforce protests by people in Myanmar against the generals’ clampdown. It also strengthens working people here as we look for ways to stand up to the attacks we face from the bosses and the government.”

In Montreal, Francis Janvier told Communist League mayoral candidate Beverly Bernardo he enjoys reading the Militant  when she called at his house Feb 11.

“I didn’t realize the U.S. still imposes an embargo on Cuba — I thought that all ended with Obama,” he said. Bernardo gave him a leaflet for the upcoming Feb. 18 picket against the embargo at the U.S. Consulate in Montreal.

While former President Barack Obama reestablished diplomatic relations with Cuba and eased some restrictions, his administration continued Washington’s decadeslong economic war against the people of the island. The Trump administration tightened Washington’s embargo even further, “making life for the Cuban people even more difficult,” Bernardo said.

“That’s why getting the truth out about the Cuban Revolution and organizing actions in its defense is so important,” she added.

Janvier had enjoyed reading the French-language edition of The Clintons’ Anti-Working-Class Record: Why Washington Fears Working People  by Socialist Workers Party National Secretary Jack Barnes, so he picked up Tribunes of the People and the Trade Unions, in which five revolutionary leaders — Karl Marx, V.I. Lenin, Leon Trotsky, Farrell Dobbs, and Barnes — explain why organizing to strengthen the unions is essential to the fighting unity and political striking power of the working class.

He asked Bernardo to return in a few weeks so he can renew his Militant  subscription.

A few days later Lynda Little and Katy LeRougetel were campaigning for Bernardo in the Lasalle neighborhood of Montreal and met Claudette Coderre, a recently laid-off grocery worker, who is looking for work.

“There are a lot of people out of work,” she told the CL campaigners.

“We need unions, so we can fight for decent working conditions,” Little said. “And we need to fight to shorten the workweek with no cut in pay to spread the available work around.” Coderre got a copy of the Militant.

If you’re interested in joining actions in solidarity with workers in struggle, meeting SWP or Communist League candidates or contributing to the campaigns, contact one of the SWP or CL branches listed in the directory.