UNION CITY, N.J. — A target weekend to campaign and collect signatures to put Joanne Kuniansky, Socialist Workers Party candidate for governor, and Candace Wagner, for lieutenant governor, on the ballot in New Jersey was a big success March 20-22. The effort boosted the total number of signatures to 831, over half of campaigners’ 1,500 goal.

Kuniansky spoke to Jamel Perry, a musician in Irvington, about the need for workers and our unions to fight for jobs, not handouts like the recently adopted government “stimulus” package.

“This is just hush money, they’re pacifying us,” Perry said. “They tell us you’ve got to pick the lesser of two evils,” referring to the Democratic and Republican parties.

Kuniansky told him the SWP campaign backed actions to demand the prosecution of cops who killed Breonna Taylor in Louisville, Kentucky. She said the looting, vandalism and confrontations organized by leaders of Black Lives Matter and antifa during protests dealt blows to the struggle against cop brutality and discouraged other working people from joining them. Perry agreed and got a copy of Malcolm X, Black Liberation, and the Road to Workers Power by SWP National Secretary Jack Barnes, along with a subscription to the Militant.

“Your campaign is for unions?” asked construction worker Jonathan Vega in Phillipsburg, when SWP campaigner Terry Evans knocked on his door in this small town near the Pennsylvania border.

Evans said Kuniansky was using her campaign to build support for the fight for a union at Amazon’s warehouse in Bessemer, Alabama. Vega told Evans he had worked for a while as a driver at Amazon. “Workers in the warehouse were treated as robots,” he said.

Vega also worked in construction and was a member of the Heat and Frost Insulators union Local 12 in New York. “I went to rallies the union called,” he said proudly. Evans pointed out the number of workers killed on construction sites in the city had risen for three straight years. “Workers and our unions need to fight to take control of production out of the bosses’ hands,” said Evans. “The bosses’ drive for profits ensures work will not be done safely.”

Vega signed up to put Kuniansky on the ballot and got a subscription to the Militant. He said he would show the paper’s coverage of the fight for a union at Amazon’s Bessemer warehouse to workers he is still in touch with in Local 12.

Kuniansky talked with housekeeper Waleska Peron at a Walmart parking lot in Kearny.

Workers ‘are in middle of the storm’

“I’m working a little bit,” Peron told the SWP candidate. “But the people whose house I work at have moved to their other house, so there is not much to do. Workers don’t have that choice. We are in the middle of the storm.”

“Unemployment tears the working class apart,” Kuniansky said. “Workers need to be at work where we can fight side-by-side for better wages and conditions and learn more about our capacities as a class,” she said, pointing to the example set by the Amazon workers fighting for a union. Peron signed to put Kuniansky on the ballot.

During a Militant Labor Forum March 20, Kuniansky described a message of support her Walmart co-worker, Tetri Boodhoo, sent to the Amazon workers. Boodhoo’s husband works at an Amazon warehouse. “She got a thank you note from an organizer for the Retail, Wholesale and Department Store Union who wrote, ‘Whatever happened in Alabama can happen anywhere. Looking forward to working with you and your husband.’” Now Kuniansky and Boodhoo are discussing what to do next to build support for the unionization drive.

“Last Saturday,” Kuniansky told the meeting, “Sara Lobman, SWP candidate for Manhattan Borough president, and I joined a demonstration in New York City in solidarity with the fight against military rule in Myanmar. We were embraced by the protesters who insisted we march behind their lead banner.”

The SWP campaign points to the common interests of working people around the world, Kuniansky said.

Alongside the 355 working people who signed petitions during the target weekend, 29 got subscriptions to the Militant. Thirteen books on working-class politics by leaders of the SWP and other revolutionaries were picked up from campaign supporters. To join teams in New Jersey or other states where the SWP campaigns, contact the nearest party branch. 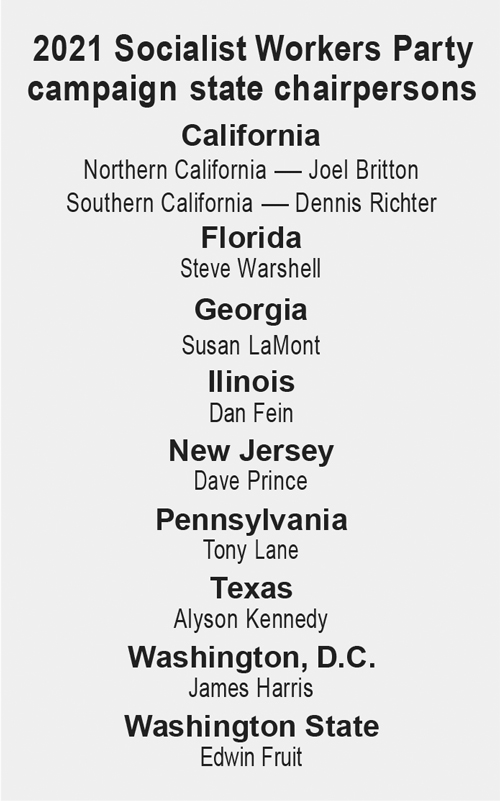 SWP campaigners collaborate to expand reach in the Midwest