UNION CITY, N.J. — Socialist Workers Party campaign supporters continue to make steady progress toward ballot status for Joanne Kuniansky, the party’s candidate for New Jersey governor. By March 29, 914 signatures were collected toward the goal of 1,500. Petitions must be filed with the state by June 8, but the party plans to file well before that.

“Owner-operator truck drivers,  we’re on our own,” Arsenio Capellan told SWP campaigners Craig Honts and Terry Evans when they spoke to him at his home in Newark March 28. “So you’re battling with everything against you. It sometimes seems that even the Teamsters don’t care about us.”

Honts pointed to the leadership of the Teamsters in the Midwest during labor battles of the 1930s. “Truck drivers won strikes and built a powerful movement. Their leadership treated owner-operators as fellow workers and reached out to and defended farmers and the unemployed.”

“We need to emulate workers and farmers in Cuba, build an alliance of the exploited classes and fight to establish our own government,” Honts replied.

Capellan was interested in finding out more about the history of labor struggles and got a copy of In Defense of the US Working Class by SWP leader Mary-Alice Waters. He also got Red Zone: Cuba and the Battle Against Ebola in West Africa and a subscription to the Militant  after signing the petition.

Outside the Walmart store in Secaucus, Candace Wagner, the SWP’s candidate for lieutenant governor, spoke to Shanice Williams, a 32-year-old postal worker. Williams said that after a couple of years of work she still doesn’t have a permanent position. She’s excluded from some benefits. She receives less family and medical leave for dependent care due to the COVID-19 pandemic.

“Work can be done safely if workers have control over production and working conditions,” said Wagner. She works on the railroad where bosses are looking for ways to get more out of fewer workers and cut corners on safety to speed up production.

“It’s about time that someone stands up. Amazon gets away with way too much,” said Williams, when Wagner spoke about the need for unions and all workers to support the union-organizing effort at the Amazon center in Bessemer, Alabama. Williams said her cousin works at Amazon and has a second job at a hospital to make ends meet.

Williams signed the petition. She is one of 50 people who have picked up subscriptions to the Militant during the first four weeks of petitioning.

An article in the March 25 NY City Lens, an online publication by students at Columbia University’s Graduate School of Journalism, reported on the campaigns of SWP candidates in New York City: Róger Calero for mayor, Willie Cotton for public advocate and Sara Lobman for Manhattan Borough president.

“The rules are aimed to maintain it that way,” Calero told the publication, “to make it seem as if the only two choices you have are the Democrats and Republicans.”

“The most important thing,” he added, “is an independent working-class party. That’s what we need.”

To join campaign teams in New Jersey or other states, contact the nearest party branch, listed in the directory. 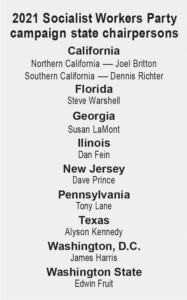