The first week of the international combined drive to expand the readership of the Militant and communist literature and raise funds for the Socialist Workers Party shows the growing interest in discussing how workers can win support for union struggles and a working-class road forward.

Along with members of the Communist Leagues in Australia, Canada, New Zealand and the U.K., SWP members are organizing to sell 1,300 subscriptions to the Militant and 1,300 books by SWP leaders and other revolutionaries by Nov. 23. In the U.S. they are raising $130,000 for the annual Party-Building Fund. As of Oct. 13 we are at 374 subscriptions and 396 books, well ahead of schedule. (See chart.)

“I will be using my campaign and the Militant newspaper to get out the word about your strike,” Manuel told BCTGM Local 252G Vice President Kevin Bradshaw, who videotaped his remarks as part of documenting the solidarity the strike has been receiving.

“Everything of significance workers have won, has been won on the picket lines and through fights on the job,” Manuel said. “My campaign is about building solidarity with workers’ struggles and explaining the need for the unions to break with the two parties of the bosses and form our own party, a labor party. I will talk about this fight on the radio and press interviews and to workers I meet when we campaign door to door.”

“We appreciate your solidarity,” Bradshaw said. “We will not accept Kellogg’s inhumane conditions. We want equal pay and equal benefits for equal work. We say, ‘One day longer, one day stronger.’”

Bradshaw introduced Manuel and Lynn to strikers and strike supporters, encouraging them “to tell your story so this labor paper can report on our fight.” Bradshaw recalled the accurate reporting provided by the Militant during the nine-month lockout workers faced at the plant in 2013-14.

Manuel and Lynn met David Whitson on the picket line. A member of the United Brotherhood of Carpenters and Joiners of America, Whitson was called to do work in the plant. But when he saw the strikers, he refused to go inside and joined the picket line.

“The bosses and their government try to keep us divided,” Manuel said. “Your act of solidarity is important.” Manuel gave Whitson a copy of the party’s campaign platform urging workers to use union power to fight employer attacks. Whitson decided to subscribe to the Militant.

An important part of making the fall drive a success is recruiting workers to finance the building of the SWP. One aspect of that is winning working people and youth that campaigners have met to continue the discussion and contribute to the fund. Some will want to organize house meetings for SWP candidates, help win solidarity for strikes and locked-out workers and join in campaigning with the SWP.

Bradette invited Perkins to join them at a day care workers’ union rally Oct. 12 during a two-day strike. “I tried to organize a union where I work,” Perkins said. “We didn’t succeed,” he said, but Perkins aims to “get a union eventually.”

He looked at the photos in Teamster Rebellion, which show union members facing off against employer-organized thugs in 1934. The book is one of eight on special offer.

Communists in the leadership of that fight led workers to reach out to the unemployed, other unions and farmers as they waged the strike battles and organizing drives that made Minneapolis a union town. “That’s how we win,” LeRougetel said. Communist leaders of Teamsters union Local 574 also campaigned against U.S. entry into the second imperialist world war.

Perkins spent a year in China and saw the onerous working and living conditions imposed on factory workers by bosses and the government there. “That’s not communism,” he said.

Perkins gave the campaigners $50 for his renewal and got Teamster Rebellion to learn more about what working people can accomplish with the leadership we deserve. “Put the rest toward whatever you think is useful,” he said.

“I’m vaccinated, but I don’t agree with the government forcing you,” Sutcliffe said. “They’re going to fire nurses who aren’t vaccinated. How does that make sense?”

LeRougetel pointed to the success the Cuban government is having combating the pandemic. This includes mobilizing medical workers and mass organizations to vaccinate the entire population by the end of the year. The government there is a product of the socialist revolution workers and farmers made in 1959. Sutcliffe subscribed to the Militant.

You can join the work to expand the reach of the communist movement by contacting the party branch nearest you. 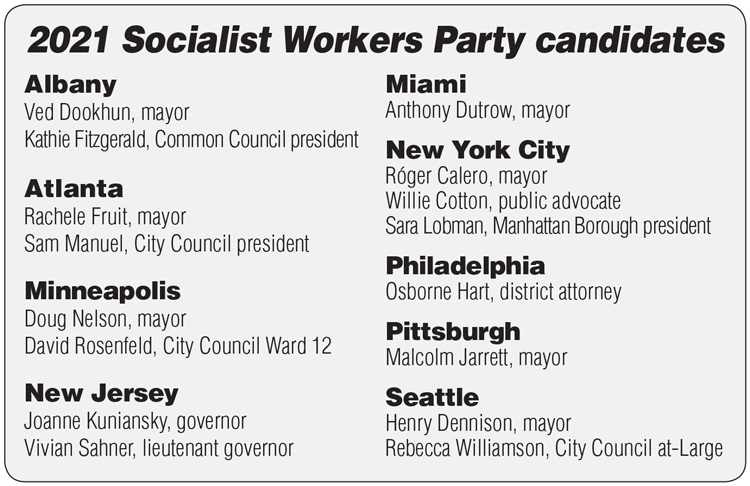