Two cases before the U.S. Supreme Court — one filed by the government of Mississippi, the other in Texas — are aimed at dismantling the court’s 1973 Roe v. Wade decision that decriminalized abortion nationwide.

That decision, however, also opened the door for an offensive against women and the working class. The Supreme Court majority based their ruling on arbitrary and shifting medical criteria, not women’s constitutional right to equal protection under the law. This was used by the capitalist rulers to cut short debate and curb growing support for a woman’s control over the decision to give birth, free from government interference over that private and personal matter.

The road forward in the fight for women’s emancipation today is not to mount a defense of Roe v. Wade. Nor to try to wrest “a better” court ruling, one that would inevitably continue to block needed discussion and debate in the working class.

Opponents of women’s second class status need a fundamentally different starting point. Our fight is an integral part of battles by working people against efforts by the employing class to place the burden of the crisis of their  system on our  backs. This is a different approach from, and a correction of, recent Militant  articles and editorials on the Texas and Mississippi attacks on women’s rights.

Fighting for what workers need necessitates rebuilding our unions and bringing together the class forces that can chart a political road to end capitalist rule and exploitation.

That course opens the door to transforming the economic and social conditions in which women and men can make decisions on starting a family. That’s the road to ending the oppression and degradation working people face today, where responsibility for the upbringing of children (as well as care for the sick and the elderly) fall on the shoulders of individuals, women above all.

A fight along these lines is the continuity of the revolutionary working-class movement, especially the Marxist leaderships of the Bolshevik Revolution in Russia and the Cuban Revolution today.

Obstacles to starting a family

Prospects for starting a family are becoming harder and harder for millions of young workers. They face falling real wages, mounting debts and soaring costs for housing, health protection and child care, as well as restrictions on the ability of working people to adopt a child.

These barriers to affordable family formation  restrict and warp the choices available to women, especially women in the working class and worse-off middle classes, about when or whether to give birth. About how to live their lives. As working people and the labor movement fight to transform these conditions, the battle for women’s emancipation advances as well.

Every aspect of workers’ lives is distorted by laws of capitalist production that drive the bosses’ dog-eat-dog battle for profit at our expense. At the same time, these workings of capital drive us to join together to defend ourselves. The choices workers face in raising a family take place within this class struggle.

Since the 2008 financial breakdown, bosses have accelerated their attacks on working people. This capitalist crisis is exacerbated by the pandemic and government-imposed lockdowns and other “mandates” on what we can do. Growing numbers face mounting job insecurity, and now soaring prices. Rents in the U.S. rose 15.8% in the last year.

More workers are turning to our unions to fight the bosses’ drive to push down wages and worsen conditions. Like millions of others, members of the Bakery, Confectionery, Tobacco Workers and Grain Millers union at Nabisco faced management’s stretching out of the workweek, ensuring workers had even less time with their families. The successful strike this summer, pushing back forced overtime, helped inspire others to fight. Battles are taking place at Warrior Met Coal, ExxonMobil in Texas, Kellogg’s and more. 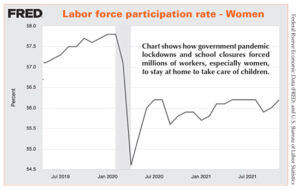 The cost of child care is out of reach, hitting women especially hard. Since the start of the pandemic, child care costs have spiked nearly 50%.

Many youth looking for a future and a family are forced to live longer and longer with parents, unable to afford setting up their own household. Some 43% of all 18-to-29-year-olds live with their parents.

Government decisions to shut down schools due to COVID forced millions of workers, especially women, to stay home and care for kids. Women’s labor force participation plunged during the lockdowns, dealing blows to their fight for equality.

Obstacles to adoption are another way the rulers hamper workers starting families. Prospective parents must show proof of sufficient income, health insurance and that they have no criminal record. They must undergo an up to six-month-long investigation, including surprise visits by prying authorities. Only then is their “suitability” as parents ruled on by a case worker.

As workers know, many children are “adopted” by relatives and friends in face of social calamities. These are acts of elementary human solidarity.

These social conditions are aggravated by laws adopted by state governments nationwide restricting women’s access to family planning services, including safe and secure birth control and abortion, including today in Mississippi and Texas.

In fact, the Supreme Court’s 1973 decision, cutting short the debate in the working class, put wind in the sails of opponents of women’s rights, who launched an ongoing campaign to restrict women’s access to abortion. Today there is not a single medical facility providing abortions in 90% of U.S. counties, hitting women in small working-class towns and rural areas the hardest. Few hospitals offer abortions today.

The exorbitant costs of starting a family have contributed to falling birth rates, which in 2019 declined for the fifth consecutive year. But in the eyes of middle class liberals and radicals, far from this being a social ill, there are already too many babies!

As they see it, “overpopulation,” not capitalist exploitation, is the cause of poverty, hunger, and destruction of the environment.

Many are so overwhelmed by angst and depression they have renounced bringing a child into the world themselves. “Harnessing the love I have for my unborn hypothetical kid comforts me in sparing them an inhospitable future,” one told the New York Times. “In this way, my choice feels like an act of love.”

Revolutionary working-class leaders have answered such reactionary views and panic-mongering before.

“We have begun to learn and are rapidly learning to fight,” he wrote. Our children will “fight  better, more unitedly, consciously and resolutely than we are fighting against the present-day conditions of life that are maiming and ruining our generation.”

And “they will be victorious.”

The determination to bring about a revolutionary future, Lenin says, is “why we are unconditionally the enemies” of the reactionary view that “population control” is the solution to capitalism’s multiple and accelerating ills.

Such an outlook, Lenin said, is  “suited only to unfeeling and egotistic petty-bourgeois couples who whisper in sacred voices: ‘God grant we manage somehow by ourselves. So much the better if we have no children.’”

It goes without saying, Lenin added, “This does not by any means prevent us from demanding the unconditional annulment of all laws against abortions or against the distribution of medical literature on contraceptive measures, etc.”

Such measures became possible when the Bolsheviks led workers and farmers to take power in 1917. Three years later, the Soviet republic became the first government anywhere in the world to abolish such restrictions on elementary rights and health care.

What is needed by the working class and our oppressed and exploited allies today are social struggles led by our unions for jobs at union-scale pay, housing, child care and cost-of-living adjustments in our contracts to protect our wages from inflation.

Through battles for these and other needs of workers, farmers, women, oppressed nationalities, and other exploited producers, the working class can forge our own revolutionary political party — independent of the capitalists, their  parties and their  government — to  fight to take state power into our own hands. To establish a workers and farmers government and join in the worldwide struggle for socialism.

This is the road to the emancipation of women.

For those around the world who want to unite working people to advance our class interests and to end the second-class status of women, there is much to learn from the experience of Cuba’s socialist revolution. From the very beginning,…