The international drive to expand the long-term readership of the Militant  has been a resounding success, exceeding the international goal with 385 renewal subscriptions being sold during the course of the six-week drive.

This response shows the growing interest in the Socialist Workers Party — its program and activities — as the party joins in efforts by working people to fight against moves of the bosses and their government to put the cost of the deepening capitalist social, economic and moral crisis on our backs.

What was accomplished through this effort sets the stage for the upcoming spring international campaign to win new readers to the Militant, expand the circulation of books by revolutionary leaders, and win contributors to the Militant Fighting Fund which helps ensure the paper continues to come off the presses.

The renewal drive was originally set to win 20% of the more than 1,300 people who subscribed to the paper during the fall to renew. Many who did so said they were particularly interested in the Militant ’s coverage of union strikes and its broader explanation of U.S. and world politics from a working-class perspective.

“I like the Militant  newspaper. I don’t read all the articles, but some, and it’s important, because I find out about a lot of things I don’t know about. I’ve noticed the many strikes of workers in other places,” Angelica Gutierrez, one of the 175 workers on strike against Rich’s Jon Donaire Desserts bakery in Santa Fe Springs, California, told SWP member Fredy Huinil at a Feb. 12 strike support rally there.

Gutierrez is one of the members of Bakery, Confectionery, Tobacco Workers and Grain Millers International Union Local 37 who had subscribed, then renewed their subscriptions to the Militant.

“The Militant  is a great tool,” Mark Grieve, a truck driver and Teamsters union member, told Communist League members Steve Penner and Felix Vincent Ardea in Toronto Feb. 13 as he renewed his subscription. “I plan to use it to talk to my co-workers about what’s happening in the world.

“Safety on the job is one of the most important issues facing truckers,” he said. “We can’t wait until someone is killed to start fighting for safe working conditions.”

Grieve also bought the new Pathfinder title Labor, Nature, and the Evolution of Humanity and Are They Rich Because They’re Smart?  and donated $20 to the Militant.

The new title says on its back cover, “Without understanding how human society, since our remotest ancestors, has been created through social labor, working people remain prisoners of the capitalist epoch in which we live.” Then it says, “Only the revolutionary conquest of state power by the working class, conscious of our class position and conditions of emancipation, can open the door to a future.”

The drive for expanding the number of long-term readers of the Militant  in Canada, Katy LeRougetel writes, “has helped us get back to regions to reconnect with subscribers who party members met during the fall drive, and has made this a more important part of our work.” This has included walking picket lines with striking hotel workers in Vancouver, British Columbia; talking with working people impacted by the massive flooding in the area there last year; and meeting with truckers in the fight being waged in Canada against wage theft and for respect.

Among those who have responded in a big way are workers behind bars. During the course of this drive renewals from prisoners were more than 10% of the international goal.

There are now more than 170 prisoner Militant  subscribers in 29 states, the most in over a decade. The paper circulates in 98 different federal, state and municipal prisons.

“I love reading the Militant,” wrote one subscriber in a Florida prison when he renewed. “I share it with my friends and others.” Prisoners often tell us about how each issue of the paper gets passed around to dozens of fellow inmates.

“If not for this newspaper, I would not be well informed about world struggles. Therefore, thank you,” wrote a prisoner who renewed in Pennsylvania.

“I thoroughly appreciate what your organization is doing,” wrote a prisoner from Texas.

Every month the Militant  receives requests from prisoners who found out about the paper from fellow inmates. Others got interested after hearing about it in a prisoner resource guide or from relatives or friends. The Militant Prisoners’ Fund makes subscriptions available at reduced rates or on a complimentary basis for those who cannot afford it.

Anxious that her subscription would not lapse, Sharon Burnett from Chicago called the Militant ’s office in New York to ask about continuing to get the paper. Members Leroy Watson and Dean Hazlewood of the SWP branch in Chicago promptly got in touch with her and signed her up. 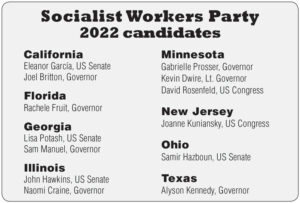 This paper “touches me and other people that I know,” she said. “I have been through this.” Burnett, a retired health care worker and member of the Service Employees International Union, is recovering from an injury on the job. She also purchased Labor, Nature, and the Evolution of Humanity and Malcolm X Talks to Young People and said she wants to be active in the SWP campaign of Naomi Craine for governor of Illinois and John Hawkins for U.S. Senate.

In Fort Worth, Texas, SWP members first met student Corey Picklesimer from Plano and Benjamin Koloski from Dallas at a women’s rights demonstration in Dallas last fall. They both renewed their subscriptions, purchased copies of the new book and are interested in participating in the upcoming April 24-May 8 international brigade to Cuba, reports Josefina Otero.

“I want to support the working-class struggles and support the SWP and become an active participant,” Koloski, a software computer programmer, said. “I see in my life the harmful effects of capitalism and want to pitch in somehow to change it.”

Join in expanding reach of the ‘Militant’!

The Militant’s successful subscription renewal campaign expanded the paper’s long-term readership and drew a new levy of readers to join in common work with members of the Socialist Workers Party. Next up is a spring circulation drive in coming weeks…