The nine-week international drive to sell 1,600 subscriptions to the Militant, the same number of books by Socialist Workers Party and other revolutionary leaders, and to raise $165,000 for the Militant Fighting Fund is off to an excellent start.

As the drive opens, 196 subscriptions and 117 books have been purchased.

At protests against Moscow’s assault against Ukraine, on workers’ doorsteps and strike picket lines, at truck stops, and in discussions with co-workers, SWP members are presenting the party’s statement, “Defend Ukraine’s independence! For the defeat of Moscow’s invasion! U.S. troops, nuclear arms out of Europe, all  of Europe!” Through these discussions they’re introducing working people to the party.

“My mother’s uncle and best friend are fighting right now in Ukraine. And I think the U.S. should send troops,” college student Arti Zylali told Alyson Kennedy, SWP candidate for governor of Texas, and Gerardo Sánchez, the party’s candidate for Congress, at a protest of 300 against Moscow’s invasion held in Southlake, Texas, March 13.

Arti’s sister, Dea Zylali, disagreed. “I think the U.S. should get their troops and weapons out of Europe,” she said. “The U.S. government has its own agenda and will only benefit from the war.”

Sánchez addressed this in his talk at the rally. “We are for the defeat of the Russian troops in Ukraine. The U.S. rulers intervene in Europe to protect their own class interests. They do nothing to protect working people, either in Ukraine or anywhere else,” he said.

The same question is posed in discussions elsewhere.

“Why do you oppose the use of the U.S. military to help Ukraine defeat the Russian invasion,” Latoya Burwell, a recent law-school graduate, asked SWP member Dan Fein when Fein knocked on her door in Chicago March 13.

“President Joseph Biden and the capitalists he rules on behalf of are not interested in Ukraine’s independence,” Fein replied. “The presence of the U.S. military in Ukraine would create another problem for working people there, who are resisting the Russian invasion.”

“That’s something to think about,” said Burwell, who signed up for a Militant  subscription and purchased Malcolm X, Black Liberation, and the Road to Workers Power by SWP National Secretary Jack Barnes

This book — along with eight others — are on special offer when purchased with a Militant  subscription. In addition, all other titles published by Pathfinder Press are available at a 20% discount.

At a truck stop in California’s Central Valley March 13, SWP member Betsey Stone spoke with trucker Bobbi Bolton, who lives in Phoenix. Bolton said she is inspired by the Ukrainians’ resistance to the Russian government’s invasion. “They are giving them a run for their money.”

She described the devastating impact on truckers of rising prices, with a gallon of diesel now costing $6.49 at the truck stop. A year ago when she considered buying a truck to become an owner-operator, the cost was under $100,000. Now the same truck goes for about $200,000.

When Stone explained the SWP is for organizing working people, building the union movement and a workers’ party to challenge the ruling rich, Bolton replied, “Yes, we need to give them a run for their money here too.” She subscribed to the Militant.

“Opposition to the war in Russia itself is key,” he said, describing protests in cities and towns throughout that country. Silberman said the CL is opposed to sanctions the U.K., U.S. and other capitalist governments inflict on the people of Russia. He explained how sanctions, along with calls to boycott Russian artistic performances, can push some Russians to look more favorably on Putin’s lies that Moscow’s war is a defensive operation. Pchelinsteva was one of three Russians at the protest who signed up for Militant  subscriptions.

The day before, CL members Catharina Tirsén and Tony Hunt knocked on the door of Aziz Mustafa in South Ockendon, Essex. “I support Ukraine,” Mustafa said. “But I don’t think NATO should get involved.” Tirsén agreed, pointing out that working people in Ukraine are resisting tenaciously, just as they did in the 2014 uprising that overthrew the pro-Moscow government of Viktor Yanukovych. She had been part of the Militant  reporting team to Ukraine after that 2014 Maidan rebellion. “We look to working people in Ukraine, just as we look to working people in the U.K.,” she said.

“We count on workers and farmers in Canada, in Russia, and around the world to defend Ukraine’s independence,” Philippe Tessier, Communist League candidate in the Marie-Victorin by-election in Longueil near Montreal, told a rally of more than 100 students in front of the Russian Consulate in Toronto March 12.

‘Our histories are intricately linked’

Among those thanking Tessier for participating in the rally was Skaidra Puodziunas, whose family comes from Lithuania. “I know how our histories are intricately linked,” she said, “the people of Ukraine are fighting for Lithuanians and all of our Baltic neighbors too.”

Galyna Tarafanyuk, a member of the Ukrainian National Women’s League of America in Georgia, described actions by working people in several Ukrainian cities to defend themselves in the wake of Moscow’s invasion.

Manuel called for the defeat of Moscow’s invasion. Participants got the party’s statement and one subscribed to the Militant.

Rachele Fruit, SWP candidate for governor of Florida, and party member Steve Warshell participated in a protest of some 30 people at the Border Patrol Station in Dania Beach, Florida, March 12. The action, organized by Family Action Network Movement, demanded an end to the detention and deportation of Haitian refugees seeking shelter in the U.S.

The SWP members talked with those present about the need to also speak out against Moscow’s invasion of Ukraine. “Why just go in there and take what’s not yours?” nurse Yolnick Cadet said of the Russian invaders. “This war will extend beyond Ukraine and affect the rest of the world.”

To join in the drive to expand the reach of the Militant, contact the SWP nearest you.

Steve Penner in Montreal, Josefina Otero in Dallas-Fort Worth, and Lisa Potash in Atlanta contributed to this article. 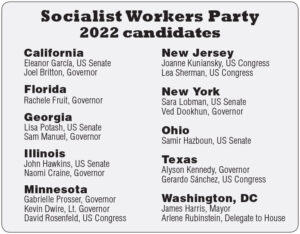 Militant Fighting Fund key to getting paper out

The enthusiastic response of Militant readers to its call for the defense of Ukraine’s independence, the defeat of Moscow’s invasion and for Washington to get all U.S. troops and nuclear weapons out of Europe is marked by contributions beginning to…