“When we see union teachers, steelworkers and miners on strike it sends a message,” Dakota Dearry, 29, told Alyson Kennedy, Socialist Workers Party candidate for governor of Texas, at an April 6 rally in McCalla, Alabama. The United Mine Workers of America rally was called to support 1,100 members of the union on strike against Warrior Met Coal nearby.

“We stepped out because we are the lowest-paid union miners,” he said. Dearry worked at Warrior Met with his father, James, until the strike began. Both now work at the Shoal Creek Mine. “At Shoal Creek we have better benefits and higher pay,” James said. “I get $5 more as a laborer. Warrior Met is greedy. They are making money.”

Dakota subscribed to the Militant, along with 18 other miners and other unionists attending the action. Participants in the rally also picked up 12 books on lessons of past working-class struggles by SWP and other revolutionary leaders.

Joshua Brewer from the Midwest Council of the Retail, Wholesale and Department Store Union got a copy of Teamster Rebellion by SWP leader Farrell Dobbs, who had been a leader of the Teamsters union as it organized across the Midwest in the 1930s. Brewer has been involved in the fight to win a union at the Amazon warehouse in Bessemer, Alabama.

A number of Warrior Met miners have been working at the warehouse, pushing for the union. “When the company organized anti-union meetings, workers would challenge what they would say,” Brewer said.

Samir Hazboun, SWP candidate for U.S. Senate from Ohio, and some campaign supporters joined a “caravan bus” of unionists organized from Louisville by the Kentucky AFL-CIO to attend the miners rally. During the six-hour trip, six unionists signed up for subscriptions and the same number of books were purchased.

On April 10 Hazboun knocked on the door of Connie Mowery in Georgetown, Kentucky. She had worked at the Toyota auto plant there. Mowery pointed to the impact of rising prices. “When child care costs $250 a week and you take home $300, what’s the point?”

“That’s why we have to fight for what’s in our interest,” Hazboun said, “and ultimately change which class is in power.” Mowery subscribed to the Militant and purchased Are They Rich Because They’re Smart?

Discussions with fellow workers like this are at the heart of the international propaganda campaign by the SWP and Communist Leagues in Australia, Canada, New Zealand and the U.K. The goal is to win 1,600 new readers to the Militant, sell 1,600 books and raise $165,000 for the Militant Fighting Fund.

Fight for safety on the job

“The companies just care about their profits,” Baker said.

Years ago he worked as a railroad conductor. After a co-worker was killed on the job, Baker made a suggestion to a boss about improving walking conditions in the yard. “The boss responded, ‘Do you know how much that would cost?’ They’re making billions in profits, and they won’t take simple steps to make it safer,” Baker said. “More people need to vote.”

“Most importantly, workers need to start organizing as a class,” Craine responded. “The bosses have two parties, the Democrats and Republicans. Voting for one or the other of them offers no way forward. We need to build a labor party, based on a fighting union movement, which can mobilize people in our own interests.”

“We’ve needed a labor party for a long time,” Baker agreed. He signed up for a Militant subscription and got copies of Teamster Rebellion and Tribunes of the People and the Trade Unions.

Stakes for workers in Moscow’s war

Angela Shufeldt, a truck driver for 30 years, subscribed to the Militant at a March 5 rally in Dallas calling for an end to Moscow’s war on Ukraine. Shufeldt won agreement from her boss to hold off on making deliveries that night so she could attend.

“It’s important to be here to show support,” she told SWP member Josefina Otero. “This could be the start of World War III.”

In Manchester, England, rail worker Hakim Gurey spoke with fellow workers and Communist League members Ólof Andra Proppé and Pete Clifford for a few hours over tea on their day off April 2.

“Putin thought he could just do this but it’s not working out the way he planned,” said Gurey, pointing to Moscow’s invasion. He liked what the CL members said about defending the independence of Ukraine and getting Moscow out of Ukraine.

“The U.S. rulers’ record is no better,” Gurey said, pointing to the death and destruction they inflicted during the 2003 Iraq war. Proppé responded, “The capitalist rulers are on a course to bring a third world war on us, but if working people build a movement of millions and a party to lead it, we can take power out of the hands of the war makers.”

Gurey said he wasn’t sure that was possible.

“Working people’s challenge is to see what we are capable of,” Clifford said. “That’s why the Militant and these books are so important.” Gurey bought a subscription to the Militant along with four books, including Malcolm X, Black Liberation, and the Road to Workers Power.

“In the past unions have been driven out” of many workplaces, health care worker Ranginui Baltes said as she signed up for a Militant subscription in Mount Roskill, a suburb of Auckland, New Zealand, April 2. “We need to bring them back to fight for better conditions.”

CL member Mike Tucker pointed to the paper’s coverage of union struggles and to the victory by Amazon workers at a warehouse in Staten Island, New York. “Without the union, we can’t stand together,” Baltes said.

To join the campaign to expand the reach of the Militant, contact the SWP nearest you. To contribute to the Militant Fighting Fund, make out a check to the Militant and send it to 306 W. 37th St., 13th floor, New York, NY 10018, or donate at themilitant.com. 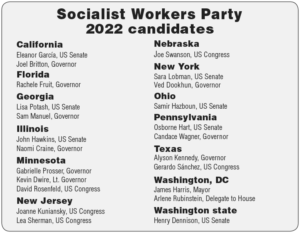 The Socialist Workers Party in Minnesota is making plans for two weeks of special campaigning May 17-31 to take candidates Gabrielle Prosser for governor, Kevin Dwire for lieutenant governor and David Rosenfeld for U.S. Congress from one end of the…