MINNEAPOLIS — During two weeks of daily campaigning through May 31, supporters of the Socialist Workers Party’s ticket of Gabrielle Prosser for governor and Kevin Dwire for lieutenant governor collected 2,566 signatures — well over the state’s requirement of 2,000 — to be placed on the ballot. And while doing so they introduced the SWP’s program to thousands of working people on doorsteps, at plant gates and political protests. They sold 89 subscriptions to the Militant and 52 books by party leaders and other revolutionaries, and collected $418 in contributions.

“We took on the ruling parties’ challenge of doing this in two weeks, and turned it into an opportunity to reach out broadly to the working class and its allies,” said Naomi Craine, the party’s candidate for governor of Illinois, who chaired a Militant Labor Forum here May 28 celebrating the gains won by the Socialist Workers Party.

“We’ve been to the Red River Valley, to Worthington, Owatonna, Austin, Faribault, New Prague, the Iron Range, and many smaller towns,” Prosser told forum participants. “Articles about our campaign have appeared in two local newspapers, with promises of more to come, as a result of our campaigning throughout the state.”

“One of the things we’ve been raising with workers and others we meet is the stakes involved in organizing opposition to Russia’s war on Ukraine,” said David Rosenfeld, the party’s candidate for U.S. Congress, at the forum. “The war reflects the unraveling of the capitalist world order put in place by Washington after the second imperialist slaughter.

“Our call for independence of Ukraine, withdrawal of all Russian troops, opposition to U.S. and EU sanctions against Russia that hit working people there the hardest gets a hearing from workers we’ve met,” he said.

In Hibbing, on the Mesabi Iron Range in north Minnesota, Dwire met Ryan Maki at his home on May 28. Maki, a member of the United Steelworkers union, has worked for 13 years as a heavy equipment operator at the Minntac open pit iron ore mine in the nearby city of Virginia. He wanted to know about the SWP’s view toward unions.

“We’re for organizing unions,” said Dwire, “and supporting struggles like the United Mine Workers 13-month strike against Warrior Met Coal in Alabama and the United Auto Workers strike against Case New Holland in Wisconsin and Iowa.”

“And what about gun control?” Maki asked.

“The SWP supports the Bill of Rights — the first 10 amendments to the Constitution, including the right to bear arms — and the 13th, 14th and 15th amendments adopted to wipe out the vestiges of slavery after the Civil War, and other protections against government abuse won by workers in struggle,” Dwire said.

“But workers today don’t need access to assault rifles and military grade weapons,” he continued. “We need organization, solidarity and class independence in the face of the dog-eat-dog morality and violence of the capitalists. Through collective struggle we will discover our fighting capacities and self-worth. 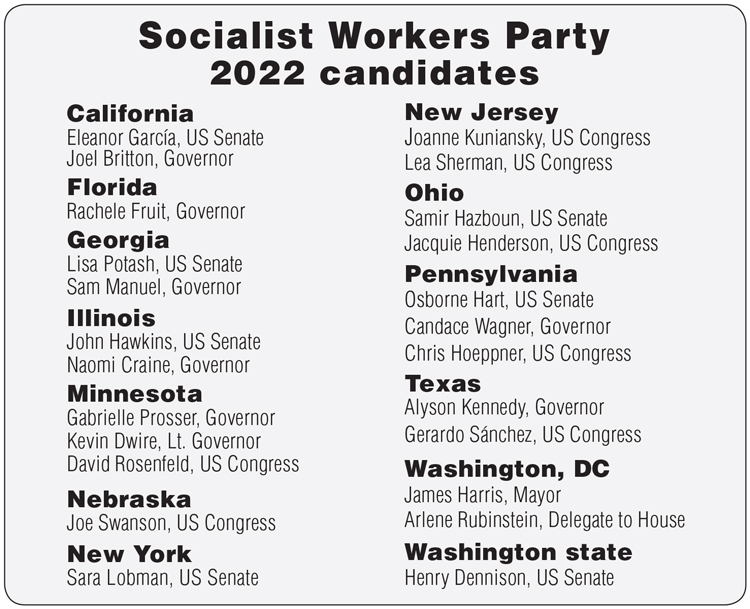 “When our unions and other fighting organizations come under attack from vigilantes and fascist gangs as the class struggle deepens, we will need to take decisive steps to organize a disciplined defense.”

“I support you, and you’re going to get a good reception in this area,” Maki said, taking extra campaign flyers to “get around in the mine.”

Maki liked the SWP’s call for a labor party and for workers control of production. He subscribed to the Militant and bought Teamster Rebellion.

On her doorstep in Monticello May 29, Sarah Burman, a 31-year-old mother of three with another on the way, and chef at a nursing home for Alzheimer patients, spoke with Dwire. He pointed to the devastating impact rising prices are having on workers’ real wages. “The government is for the rich, not the working class,” Burman said. “Even though my fiancé and I make a decent paycheck, it’s not enough. We still have to go to food pantries to make ends meet.”

David Rosenfeld and other party campaigners visited a picket line and rally May 24 by SEIU Health Care workers on a one-day strike here for better patient care and working conditions. He met Joe Rick, who has worked in hospital psychiatric care for 32 years. “I feel like I’m part of a corrupt system,” Rick said. “I feel like I’m expected to be more like a beat cop than someone providing care to a patient.”

Health care is run as a business to maximize profits, he said. “We face short staffing. There are teenagers being housed in parking garages. Patients know they are not receiving the kind of care they deserve and that makes them angry.”

“There’s a simple solution to short staffing,” Rosenfeld said, “hire more people. Change will only come from the action of our class, the working class, and we have to organize to use union power to win that. We also need to do that on the political plane — break with the two parties of big business and form our own party, a labor party.”

Rick signed to put the SWP candidates on the ballot, subscribed to the Militant, got Are They Rich Because They’re Smart? and contributed $10 to the campaign.

Prosser was one of the speakers at a May 29 rally in Minneapolis demanding an end to Washington’s economic war against Cuba and to lift the U.S.-imposed travel ban. The socialist gubernatorial candidate recently returned from Cuba, where she was part of a team of SWP and Communist League members at the Pathfinder Press booth at the Havana International Book Fair.

“In 1959 the workers and farmers of Cuba made a socialist revolution,” Prosser said. “Under Fidel Castro’s leadership, they took political power. Despite all the obstacles, the revolution continues as a living, fighting revolution.

“Some of the Cubans I talked with,” she said, “were surprised when I told them that members of the Socialist Workers Party in the United States campaign door to door and on picket lines explaining to workers the need for a socialist revolution in the United States.

“I showed them a 1961 statement by Fidel Castro that is published on the back cover of the Pathfinder book, Cuba and the Coming American Revolution. Castro expressed confidence in the U.S. working class, saying, ‘There will be a victorious revolution in the United States before a victorious counterrevolution in Cuba.’”

In New Jersey, Joanne Kuniansky and Lea Sherman, SWP candidates for U.S. Congress, filed petitions May 24 at the Department of Elections in Trenton for ballot status. Each filed petitions with more than 150 signatures, triple the number required.

After filing, Sherman visited the picket line of striking nurses and technicians fighting for better wages and staff-to-patient ratios at St. Michael’s Medical Center in Newark. “Solidarity from workers and our unions is crucial to the outcome of this struggle,” she said.

The SWP is planning to expand campaigning all across the country, including efforts to put the party on the ballot for U.S. Congress from Philadelphia. If you want to find out more about the party, or join SWP supporters in taking the party’s program to workers and farmers, contact the SWP campaign office nearest you.