For more than 50 years, inmates in federal prisons have subscribed to the Militant with little interference by prison authorities. But in a serious threat to constitutional rights to free speech and freedom of the press, the warden at the Federal Correctional Institution in Phoenix, Arizona, has banned two issues of the socialist newsweekly.

There are currently subscribers to the Militant in over a dozen federal prisons. They are part of the newsweekly’s nearly 200 prison subscribers at some 95 state and local institutions. A ban at the U.S. Penitentiary in Florence, Colorado, in 2014 was overturned after the Militant’s attorney, David Goldstein, filed an appeal.

The warden in Phoenix gave no reason for banning issues no. 23 and no. 25, other than the false claim that the paper contains “political extremism and is detrimental to the security, good order, or discipline of the institution.” The rejection notice only lists issue no. 23, but no. 25 was returned in the same envelope.

The notice is in violation of the U.S. Bureau of Prisons’ own regulations,  which state that a rejection notice “must contain reference to the specific article(s) or materials(s) considered objectionable.” Not a single article or sentence from the banned issue is cited.

The bureau’s rules explicitly say that a warden “may not reject a publication solely” because its political content is “unpopular or repugnant” in the eyes of prison officials.

Goldstein has served notice on federal prison authorities that the paper is filing an appeal of the ban, seeking its reversal.

“Prisoners have a right to read the Militant’s reports of current events and topics of global significance,” states a letter from Anthony Johnson for PEN America, an organization of writers that defends the right to freedom of expression. “The rejection of Militant issues no. 23 and no. 25 serve as an unwarranted restriction of the rights of both the intended reader and the publisher.”

The front page of issue no. 23 includes a feature article opposing Moscow’s invasion of Ukraine and another titled “Gun violence, crime are result of today’s crisis of capitalism,” a topic on the front page of hundreds of papers across the country. Inside is a feature explaining the importance of working people opposing antisemitism. There is also coverage of an ongoing strike by members of the United Mine Workers in Alabama, who have been walking the picket line at Warrior Met Coal for 16 months, and other labor battles.

Issue no. 25 covers similar topics, including articles on the rail workers’ fight for safety and higher pay; defense of women’s rights; a U.N. hearing on the fight of Puerto Rico for independence; and an article on the deepening capitalist economic crisis.

“There is a reason why the warden doesn’t cite a single sentence in the Militant that could be considered ‘objectionable,’” Militant editor John Studer said Aug. 8. “That’s because nothing in the paper can justify banning it. Neither the warden nor any other prison official has the right to ban the Militant because they disagree with its point of view.

“Working people behind bars have the constitutional right to read about the war in Ukraine, to consider different views on where crime comes from, to be part of the world, to form their own opinions,” Studer added.

He pointed out that the ban is not just an attack on the Militant. If it’s allowed to stand it will be used to go after other publications, not just in federal prison, but in state and local jails across the country.

Join the fight to defend the right of prisoners to read material of their own choosing and the right of newspapers to have subscribers behind bars. Get your union and co-workers to send letters or petitions calling for the ban to be reversed. Get your local community group, prominent individuals and others to do the same. Get the word out as broadly as possible. For more information see box below. 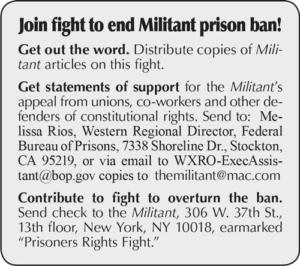