PHILADELPHIA — “You’re on the ballot! And good luck!” Larry Otter, the Socialist Workers Party’s lawyer in Pennsylvania, told Chris Hoeppner, the SWP candidate for U.S. Congress from the 3rd District, and the Militant Aug. 9.

“Despite moves by state elections officials in Harrisburg to violate the SWP’s constitutional right to be on the ballot, no one filed to challenge our petitions,” Osborne Hart, SWP candidate for U.S. Senate, told the press the same day. “We’ll be on the ballot, campaigning vigorously all across the state and beyond, promoting a working-class program and joining in actions by the labor movement, farmers and others fighting capitalist exploitation and oppression.”

In addition to Hoeppner, a freight rail worker and member of the Sheet Metal, Air, Rail and Transportation Workers Union (SMART), and Hart, the SWP is running Candace Wagner from Pittsburgh for governor. Wagner is a member of the Brotherhood of Locomotive Engineers and Trainmen.

Supporters of the SWP, unionists and others had been organizing to fight any moves to bar Hoeppner from the ballot. Four months after petitioning had begun and less than a week before the deadline, when the SWP filed its petitions in Harrisburg July 27, election officials told Hoeppner he had enough signatures to be on the ballot, but that the requirement had just been raised from 1,000 to 2,300. The party submitted 2,422 signatures, well over two times what had been required.

Hoeppner and Otter were told the change had been sent out as a “tweet.” But it wasn’t changed on the state’s election website until July 30. And authorities never informed the SWP, but did send emails to the officially recognized “minor” parties, the Greens and Libertarians. This didn’t end up helping the Libertarians, a number of whose candidates have been challenged by Republican Party forces.

“It was an outrage what the state did, because I think the democratic process should mean equal participation. It was very undemocratic for them to make it harder for ballot access. The state should make it easier to participate, not harder,” Enock Charles Faustin told the Militant Aug. 9. Faustin hosts the program “Rights, Society, Politics” on Radio Olivier, affiliated with the Haitian congregation of Mount Olive Church of God in Orange, New Jersey.

“I think it’s great that Chris and the SWP got on the ballot!” campaign supporter Reafa Carter told the Militant. Carter lives in Congressional District 3 and signed the petition to put Hoeppner on the ballot. “This will make it a little easier for the party that represents us ordinary people to meet and talk with more workers.”

In preparation for a possible fight over the right of the SWP to be on the Pennsylvania ballot, special Militant Labor Forums were organized Aug. 6 in Philadelphia, where Hart spoke, and in New York, featuring SWP national campaign director John Studer. 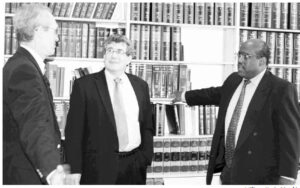 The capitalist rulers face a deepening political crisis, he said. Both of their political parties — the Democrats and Republicans — are fracturing. Never-Trumpers are fighting a rear-guard action against the former president consolidating control over the Republican Party. The democratic socialist wing of the Democrats is chafing at the constrictions they face. These parties are coming apart.

The New York Times — which functions as a house organ for the Democrats — tries to claim everything is great in the country today, hoping to boost the party’s chances in the elections as President Joseph Biden’s poll numbers plummet, he said. In an Aug. 6 article they hailed government reports saying 528,000 people got jobs in July, describing the economy as, “Jobs aplenty. Sizzling demand.” If this is a recession, the paper says, it “is unlike any previous one.”

“But even in this same article, the Times has to admit this isn’t the real story for working people,” said Studer. They said: “To most people, of course, this doesn’t feel like a boom. Measures of consumer confidence are at record lows, and Americans overwhelmingly say they are dissatisfied with the economy.

“High inflation is eroding — and in some cases erasing — the benefits of a strong job market,” they confess, and “hourly wages, adjusted for inflation, are falling at the fastest pace in decades.”

In fact, Studer said, the most important figures on jobs — the labor force participation rate — are going down. There are 623,000 fewer workers in the workforce today since the beginning of the pandemic. And more retired workers are unretiring, unable to keep up with rising prices.

We need own party, a labor party

Many big political questions today revolve around the place of the Constitution, Studer said, including on Supreme Court decisions like Roe v. Wade, freedom to worship, the right to bear arms, as well as the White House’s spiraling use of executive orders, not legislation, to try and impose its way.

Liberals insist the Supreme Court is increasingly reactionary, and big changes are needed, both to the court and to the Constitution.

Times columnist Jamelle Bouie, for example, proposes to get rid of the U.S. Senate, or to turn it into a purely ceremonial body, like the House of Lords in the U.K.; make the House of Representatives the decision-making body, increasing its size to “at least 600 members,” hoping for a decisive Democratic majority to control all legislation; and take decisive steps to “discipline a rogue Supreme Court.”

Alexandria Ocasio-Cortez wants a new law that will bar the Supreme Court from making any decisions that effect “abortion, marriage equality, non-procreative intimacy, and contraception.”

“We are supporters of the Constitution, as written and strengthened by dozens of amendments, many the result of pressure from the working masses; the federal system in the U.S., with three chambers of government and checks and balances put in place by the young coalition of merchants, slave owners and farmers on the backs of the American Revolution,” said Studer. “Of course it’s a bourgeois Constitution and government, but it provides space and powerful rights against government attack that are good for the working class and our struggles.”

“We find a lot of receptivity to the party’s political program,” SWP Senate candidate Hart said at the Philadelphia forum, “and for the need for the working class to form its own party, a labor party, to join with farmers and our other allies to fight to take political power into our own hands.”

Brian Williams in New York contributed to this article. 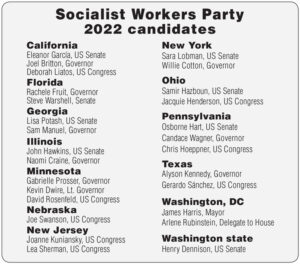