With early voting already underway, both Democrats and Republicans claim the midterm elections are the most important in decades. The bosses’ two main parties are laser focused on factional battles against each other. Whichever party controls the House and Senate after Nov. 8 will rule for the bosses, who are stepping up their drive to offload the crisis of their capitalist system on workers’ backs.

More and more workers today confront threats to our jobs, wages that fail to match soaring prices, declining access to health care, grueling and arbitrary schedules, unsafe conditions on the job and other attacks. More workers are looking for ways to organize and use unions to resist.

At the same time, the White House and fellow Democrats have unleashed the FBI, the rulers’ political police, against Donald Trump and others, including supporters of Cuba’s revolution in Puerto Rico and the African People’s Socialist Party. They are dealing serious blows to constitutional freedoms needed by workers who want the political space to fight to change the conditions we face. 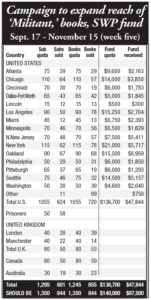 The only party offering a class-struggle course is the Socialist Workers Party. Its candidates win solidarity for union battles, defend constitutional rights and call for the formation of a labor party based on our unions, to organize working people to take political power into our own hands.

“Using our unions to stand up to the bosses’ attacks is key for strengthening working people,” Alyson Kennedy, SWP candidate for governor in Texas, told the Militant. “We need to maximize the support that can be won for contract battles, like the tens of thousands of rail workers are waging, and for strikes like that of the United Mine Workers against Warrior Met Coal in Alabama.”

The Democrats say the key issue in the election is the need to stop Trump. They insist a Democratic victory is crucial to prevent a takeover by “MAGA Republicans,” who are nothing less than “semi-fascists.” At bottom, their target is the large and growing number of working people who they feel can’t be trusted with important things like politics.

The House select committee members  are “investigating” the Jan. 6, 2021, melee at the Capitol and demand Trump submit to a deposition, which they plan to be an inquisition.

All this gets attention from like-minded liberals and the middle-class left, but does nothing to address the needs of working people today.

While Republican candidates point to some of the problems workers face, like soaring inflation, rising crime and more, they present no road forward either.

Democrats say the other key election issue is abortion. They posture as defenders of women’s rights and claim the Supreme Court’s Dobbs ruling last June banned abortion. In fact, that ruling correctly held that Roe v. Wade, the 1973 case that decriminalized abortion, had no basis in the Constitution. The ruling didn’t ban a single abortion. It sent the issue back to the people and their state representatives to be argued out.

Biden implored people Oct. 18 to elect enough Democrats so he can enact a Women’s Health Protection Act, an election ploy and a danger to the fight for women’s emancipation. The act would cut off the badly needed debate to win a solid majority among working people, and bar states from legislating on abortion.

Decriminalization of abortion can only be won as part of a broader working-class fight against the assaults of the bosses and their government. Those battles can make gains that will help young workers to be able to start families and provide for them, make the burden of home chores the responsibility of society, and advance construction and availability of health care and family planning centers that provide access to contraception and abortion.

Neither of the bosses’ parties presents any road against today’s capitalist crisis and its raging inflation. And now production and trade are contracting, here and worldwide. Our jobs are threatened.

“Our unions need to fight for a sliding scale of hours and wages. Thirty-hour workweeks with no cut in pay to prevent layoffs. Cost-of-living adjustments in every contract, Social Security and all benefits, so when prices rise our wages go up automatically to match,” Kennedy said. “Today’s union battles point a way forward.”

Republicans say Democrats are responsible for rising crime, pointing to calls made by Biden in 2020 to “defund the police.”

“When working people succeed in taking power from the ruling class we’ll replace their brutal cops with proven fighters from our own ranks,” Kennedy said. “Today the bosses need cops — and the entire U.S. ‘justice’ system, with its courts, prisons and executioners — to defend their property and control us. They can’t be ‘defunded’ or abolished under capitalist rule. Efforts to do so can leave people defenseless.”

Crime is a byproduct of a social system based on the brutal exploitation of the toiling majority by the ruling capitalist families and the dog-eat-dog values and deadly violence it breeds.

Both bosses’ parties view workers as a criminal class. They see in our struggles today a future when their rule is challenged and increasingly they fear us.

Crime falls during mass struggles when working-class solidarity comes to the fore and working people feel they have something to fight for. That was true during the rise of the industrial unions in the 1930s and the civil rights movement that uprooted Jim Crow segregation.

At the top of the capitalist rulers’ “criminal justice” team is the FBI, which is tasked with targeting anyone who threatens their rule. The Democrats use the FBI to do their dirty work, from its role in promoting the false charge that Trump was a tool of Moscow in 2016 to its armed raid on his Mar-a-Lago home this summer. Their aim is to refurbish the reputation of their political police so it can be used against the working class and its vanguard in battles to come. 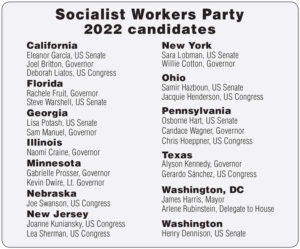 Help spread the word about the SWP campaign!

With elections less than two weeks away, Socialist Workers Party candidates and campaign supporters are stepping up efforts to reach working people with the party’s program. Campaigners are bringing solidarity to strike picket lines, talking to workers and farmers door…