In the final days of the 2022 campaign, Socialist Workers Party candidates are advancing a fighting working-class program, backing rail workers’ battle for livable working conditions and explaining why opposing government assaults on constitutional freedoms is central for working people.

Free speech and assembly, the right to worship, protection from unreasonable search and seizure and other rights codified in the Constitution are in the interests of all working people. That’s true whether we’re building unions to fight employer assaults on wages and conditions; joining actions in solidarity with working people worldwide like the struggles unfolding in Iran today; or protesting the U.S. rulers’ foreign policy, such as their brutal embargo of Cuba.

President Joseph Biden’s administration is dealing blows to these protections as it tries to crush its political opponents. Democrats are trying to drive former President Donald Trump out of politics, using show-trial hearings on the melee at the Capitol last year and the FBI’s armed raid on his Mar-a-Lago home. Trump ally Steven Bannon was sentenced to four months in prison Oct. 21, after he refused to appear before the House select committee.

Regardless of who is targeted today, the same and worse will be done to workers. Just weeks after the FBI’s Mar-a-Lago raid, the political police began harassing members of the Cuba Solidarity Committee in Puerto Rico — who refused to be intimidated.

These attacks can be fought. SWP candidates explain the example their party has set, pushing back restrictions on rights through involvement in working-class struggles over decades.

This includes a political campaign and lawsuit by the SWP against the FBI that exposed the extent of the FBI’s illegal wiretaps, burglaries, use of informants and disruption operations against the party and others. Judge Thomas Griesa ruled the FBI’s invasive spy operation and Cointelpro interference violated the party’s constitutional rights to free association and were illegal.

Today Democrats are trying to refurbish the FBI’s image.

The party seeks to win support for pushing back the use of the political police. Sara Lobman, SWP candidate for U.S. Senate from New York, helped build a meeting of over 100 in East Harlem Oct. 28 to protest the FBI’s harassment of members of the Cuba Solidarity Committee in Puerto Rico.

“What the FBI did shows the scope of attacks on constitutional freedoms and the need for a fighting response,” Lobman said.

Soaring prices continue to squeeze workers’ living standards, adding to the difficulties young workers face starting a family and providing for it. This comes on top of the heavy toll on working people of rising levels of drug, alcohol and gambling addiction. The capitalist class profits off these “industries,” and their two main parties have no interest in eradicating them.

Central to changing these conditions are the union struggles unfolding today.

“Because of what millions of workers face there’s more interest in working-class solidarity,” Joel Britton, a member of Bakery, Confectionery, Tobacco Workers and Grain Millers union Local 125 and the SWP candidate for governor of California, told the Militant. During his campaign Britton has walked picket lines by striking nurses, airport workers and confectionery workers.

“I’ve used my campaign to build support for the strike by fellow BCTGM members at Corn Nuts in Fresno. Their strike showed that if you fight you can win,” said Britton. The workers returned to work with union rights and a much-improved medical plan, the main issue in the strike.

“Voting SWP is the only way you can cast a vote to support the fight to defend, extend and strengthen our unions,” Britton said. “Only the SWP offers a working-class outlook and perspective, independent of the Democrats and Republicans and explains why workers need our own political party, a labor party based on the unions. Only the SWP advances a way forward for working people to take political power into our own hands, the only road to organize to conquer the problems we face.”

SWP candidates explain that a union-led fight for employment is crucial — with wages, hours and conditions necessary for families to live instead of getting torn apart.

The labor movement needs to fight for a shorter workweek with no cut in weekly pay — with regular hours that workers can count on — to share the work around and prevent layoffs. Cost-of-living adjustments in all contracts and all benefits are needed to protect workers’ living standards from soaring prices. Unions should fight for a basic income supplement for all families who need it, so workers can keep their jobs and participate in the workers’ movement, as opposed to falling onto welfare.

The capitalist rulers’ foreign policy is an extension of their assault on workers at home. Their wars — from Vietnam to Iraq and Afghanistan — use working people as cannon fodder against fellow working people worldwide.

“We back the toilers in Iran fighting against brutal repression by the reactionary regime there. We defend the Ukrainian people’s battle to defend the independence of their country from Moscow’s invasion,” Alyson Kennedy, SWP candidate for governor of Texas, said. “The working class needs its own foreign policy based on solidarity with workers and farmers around the world.

“We point to the example of Cuba’s socialist revolution as an example for working people worldwide.”

Working people on the land also face attempts by the capitalists to put the crisis on their backs. Prices of fertilizer, animal feed, seeds, fuel and pesticides have soared.

Exacerbating these conditions in Texas is government indifference to the impact of a drought. Kennedy has visited rural areas of the state to learn more about what ranchers face and discuss the party’s program.

“The land should be nationalized so it can be used by farmers and not treated as a commodity to be bought and sold at a profit,” she told the Militant. “This is an important question for the entire labor movement — the fight to better the conditions of rural toilers, including both working farm families and farmworkers, with or without papers. Workers and farmers have a common enemy, the capitalist class, and we need to fight for a government of our own.”

Don’t waste your vote on one of the bosses’ parties, she said. “It’s better to vote for something you’re for and not get it than vote for what you don’t want and get it.

“Democrats or Republicans represent some of the wealthiest people in the world, from Elon Musk to the older ruling families like the Rockefellers,” Kennedy said. “Vote Socialist Workers Party! Join the only party that bases all its activities on confidence in the capacities of working people to change society.” 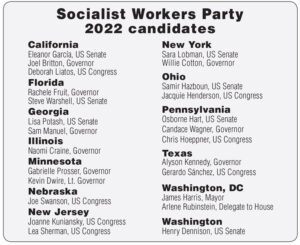 CHICAGO — The Nov. 8 ballot in Illinois includes Amendment 1, a referendum to change the state constitution that many union and Democratic Party officials promote as a “Workers Bill of Rights.” In fact, it does nothing to advance workers’…

OAKLAND, Calif. — The Socialist Workers Party has a long history of backing decriminalization of abortion, a part of the broader battle to advance the rights, interests and fighting capacity of women and working people as a whole. But Proposition…