Socialist Workers Party candidates and supporters used the final days before the Nov. 8 elections to discuss with fellow working people what we can do together to stand up to bosses’ moves to push the deepening capitalist crisis onto our backs.

“We’ll get nowhere if we depend on politicians,” Tyler said. “Only workers can solve our problems.”

“I’ve been working since I was 14 years old, much of that time as a nurse,” Nana McChristian said. “Now I have cancer and my health insurance says they will not pay for my treatment.”

After getting a subscription to the Militant, she asked Fein for a few subscription forms. “I’ve got friends who work in the steel mill who will be interested in getting the Militant. It sounds like it’s just what we need.”

On Nov. 6 Deborah Liatos, SWP candidate for Congress from California, campaigned at a farmers’ market in Oxnard, northwest of Los Angeles. Several farmers told her that water restrictions are forcing farmers to limit what they plant. Xochiti and Charles Beckley were selling produce they grow on a quarter acre at their house. They told Liatos that Xochiti’s parents worked as farmworkers all their lives. “The biggest challenges for farmworkers are benefits and resources,” Xochiti Beckley said. “They are tough jobs and don’t pay enough.”

“Workers and farmers need to mobilize to fight for our rights, gain confidence in ourselves,” Liatos said. “We need to take power into our hands and run society in the interests of the vast majority.” The Beckleys got a subscription to the Militant to learn more.

The campaign of Gabrielle Prosser, SWP candidate for governor of Minnesota, who is on the ballot, continues to get press coverage, introducing the party’s program broadly. “Gubernatorial candidate Gabrielle Prosser: DFL, GOP both spell ‘boss.’ I’ll work for workers,” was the headline of her opinion piece printed in the Star Tribune Nov. 4.

“We live in a class-divided society,” Prosser writes. “Both the Democratic and Republican parties defend the interests of the bosses. The program of the Socialist Workers Party says workers need our own party, a labor party, based on the unions.” 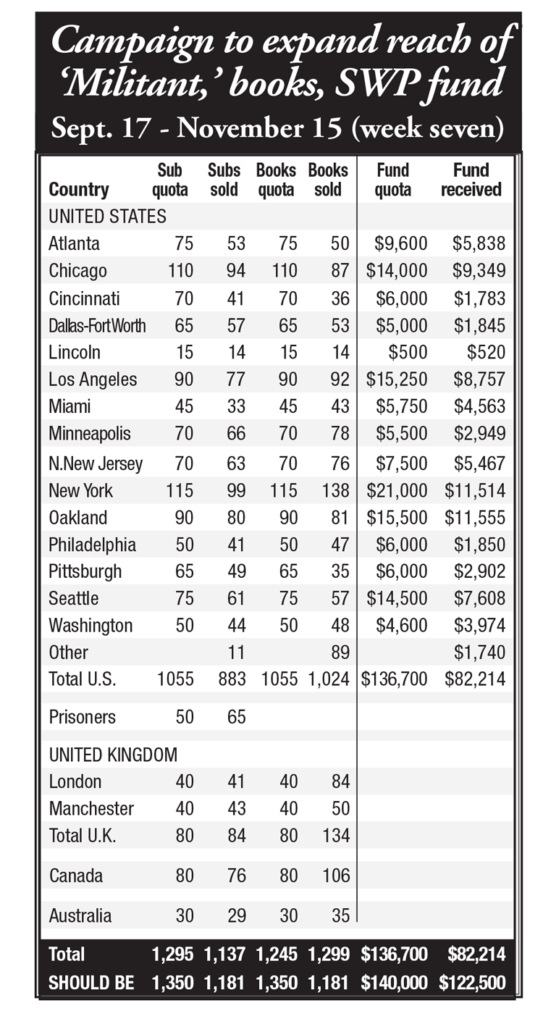 SWP and Communist League members in Australia, Canada and the U.K. are in the final week of the fall campaign to sell 1,350 Militant subscriptions and 1,350 books by SWP leaders and others offering a revolutionary road forward.

There have been a series of demonstrations in the Louisville, Kentucky, area since the death of Mahsa Amini Sept. 16 after her arrest by the “morality” police in Iran. “Women are half the world,” Niloofar Sabzevari told Betsy Farley, an SWP member from Cincinnati, at an action Oct. 29. “We deserve to be treated with respect. I don’t understand why women are treated so badly.”

“The bosses make profits off women’s second-class status,” Farley said. “They pay us less and push us out of the workforce when they don’t need us. During the COVID pandemic many women had to leave the workforce to take care of children, the sick and the elderly.”

Sabzevari said she has met many newly arrived refugees from Afghanistan at the bank where she works. “I don’t care how refugees got here,” she said. “Once they are here, they should have equal rights.”

“We’re not for open borders, but our party fights for an amnesty for all immigrants who are in the country,” Farley said, “It’s part of the fight to unite the working class.”

After looking over the Militant, Sabzevari decided to subscribe.

In the U.S. the SWP is reaching out to raise $140,000 for its fall Party-Building Fund. The party is entirely funded by working people, who contribute whatever they can to help finance its work. An appeal at a Militant Labor Forum in Chicago raised $300.

To join the campaign to get out the Militant, contact the SWP or Communist League branch nearest you.

Donate your California gas-tax rebate to the ‘Militant’

Workers are being hard hit by soaring prices for food, gas, rents, medical expenses and more. The Militant newspaper — which fighting workers and trade unionists depend on for clarity on politics and as a guide to action — is…