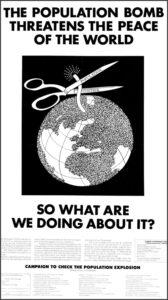 Howls of impending doom and gloom spread through the liberal capitalist media after the United Nations announced the world population hit 8 billion in November.

Many self-appointed population “experts” have determined this means the planet has reached its maximum “carrying capacity.” Any further growth will spread mounting hunger as the numbers of babies to feed grows while food supplies languish, especially given the unresolved climate control crisis. The worldwide population, they say, will rise beyond this threshold, to 10 billion over the next few decades.

This has spurred a new wave of neo-Malthusian terror of a world with too many people — especially in the semicolonial world — and increasing misery.

The most populous regions are in Asia, with India and China both at 1.4 billion. By far the fastest pace of growth is in sub-Saharan Africa, with some of the biggest population increases in Democratic Republic of Congo, Ethiopia, Nigeria and Tanzania.

Another problem connected with this population burst, liberal pundits say, is that there are too many “older people” living longer and demanding outsized resources for health, nutritional and other needs that increasingly can’t be met.

The number of people aged 65 and over is now 783 million, and the “experts” say this will double over the next 20 years, compounding the crisis.

“Having more people on Earth puts more pressure on nature, as people compete with wildlife for water, food and space,” argued CNN Nov. 15. “Policymakers can make a big difference by mandating a shift in consumption patterns,” a veiled threat to ration food and services for those most in need.

It’s useful to remember the last time neo-Malthusian social planners warned of disaster. From 1907 all the way to the 1970s, state-sanctioned forced sterilizations were widespread, with 33 states in the U.S. having eugenics boards empowered to order such procedures. In just the years 1947-48, an estimated 7% of Puerto Rican women were sterilized.

This round of population hysteria was answered in a 1960 pamphlet by Socialist Workers Party leader Joseph Hansen titled Too Many Babies? The Myth of the Population Explosion. Pathfinder Press is planning an expanded edition in 2023.

“A number of eminent dignitaries and scientific authorities have been seeking to arouse a lethargic public to a new menace — an enemy of formidable character, perhaps the most dangerous America has yet faced,” Hansen says. “This enemy has already occupied the cribs, nurseries, and playgrounds of America.”

Hansen points to the dire warnings that rapid population growth will soon outstrip food supplies. This is what Rev. Thomas Malthus argued over 220 years ago. He opined that the world’s population was increasing “geometrically,” but food production was only going up “arithmetically.” Either slash population growth of face starvation, he and his echoers today demand.

But it didn’t turn out that way, Hansen explains. Actually what happened was a “food explosion.” The impact of the industrial revolution and scientific advances greatly increased the productive capacity of farmland, despite the fact the number of farmers declined. A surplus of food was produced that could feed the world, but to the monopolies and their government enablers that controlled the production, processing and distribution of food, this wasn’t their aim. They were driven “not to provide people with food, but to make money,” Hansen says.

Hansen points to the arguments against Malthus’ population theory made in 1844 by Frederick Engels, who along with Karl Marx was a founder of the modern communist movement: “(1) Under capitalism the distribution of hunger in the population is not due to the abundance of the poor but to poor distribution of society’s abundance. (2) Wealth can be increased without limit if society is so organized as to bring about the most effective combination of labor power and science.”

To deal with this contradiction requires building a revolutionary-minded working-class movement that can organize to take political power and transform society’s priorities and internationalist solidarity to meet human needs.