Members and supporters of the Socialist Workers Party and Communist Leagues in Australia, Canada and the United Kingdom are reaching out to the more than 1,300 persons who subscribed to the Militant  last fall. They will discuss the party’s program and activities and win them to become long-term readers.

And getting to know better the workers who are reading the paper and discuss how we can work together to defend the interests of all working people. 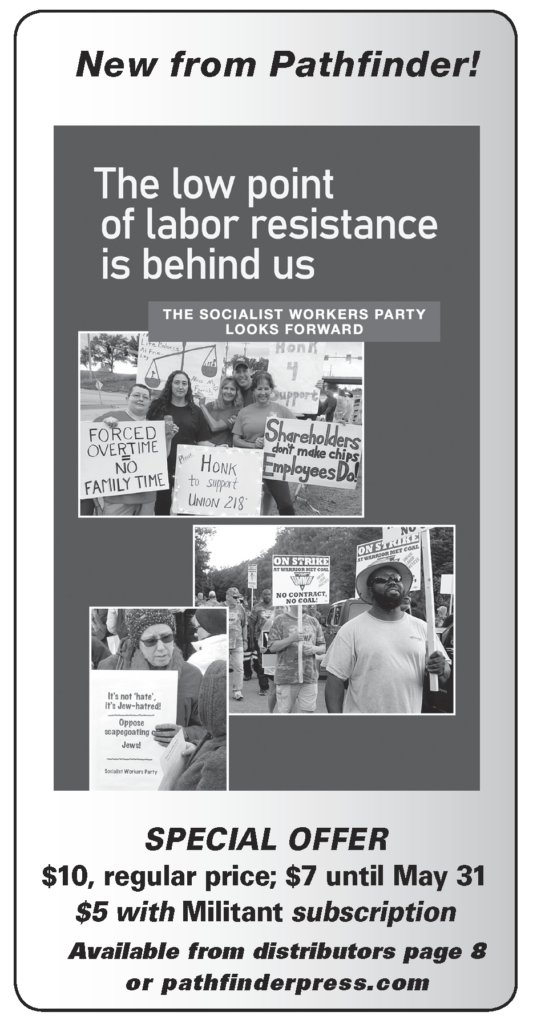 Part of this effort is introducing readers to Pathfinder’s titles, including the newest book, The Low Point of Labor Resistance Is Behind Us: The Socialist Workers Party Looks Forward. It’s available for $5 with a subscription or renewal, or at the special price of $7 (see ad at right).

“I found that the Militant’s information about workers in other parts of the country and other parts of the world is important,” Jorge Aguayo told Ilona Gersh, Socialist Workers Party candidate for Chicago mayor, who is one of his co-workers. “The problems they face are identical to the problems that my fellow workers experience. If an employer gets away with violating an employee’s right here or anywhere else, other employers will try to get away with it.”

Gersh had introduced Aguayo to the Militant, showing him an article about the strike by bakery workers at Ingredion in Cedar Rapids, Iowa. “Aguayo is a Bakery, Confectionery, Tobacco Workers and Grain Millers shop steward at the Alpha Baking Company where I work and helped lead a solidarity collection the union organized in the plant, raising hundreds of dollars for the strikers,” she wrote.

While working together to win contributions from fellow unionists, Aguayo got a subscription to the paper and purchased Teamster Rebellion by Farrell Dobbs and Tribunes of the People and the Trade Unions by Dobbs, Jack Barnes, Karl Marx, V.I. Lenin and Leon Trotsky. He decided to renew his subscription for a year.

In Grand Prairie, Texas, Arelly Davalos, a member of BCTGM Local 111, renewed her subscription. “I like the Militant  because it makes the effort to get the opinion of regular working families,” she told co-worker and SWP member Gerardo Sánchez. “Getting the Militant  out in Spanish and English is very useful it keeps you discussing working-class politics in both languages and allows you to talk politics with anybody.”

In Quebec City, Beverly Bernardo, Communist League candidate in the Quebec by-election in Montreal’s riding of Saint-Henri-Sainte-Anne, joined the picket line of longshore workers Jan. 14. They have been locked out by the bosses at the Port of Quebec since September.

“I have 35 years of service and still have to call in every day to find out my shift for the next day,” Richard Hodgson told Bernardo. “I want a life. It’s not the money. It’s the hours. I’ve worked 60 to 70 days in a row.”

“I’m a member of the Bakery Workers union and I’m building solidarity with your fight with fellow union members,” Bernardo said.

“If we don’t fight, all the other port workers will pay the price,” Hodgson told her.

To join the effort to spread the reach of the Militant  and to get out the new book, contact the branches of the SWP and Communist League listed in the directory.

SWP candidates file for the ballot in Texas

FORT WORTH — Alyson Kennedy, Socialist Workers Party candidate for mayor, and Gerardo Sánchez, running for City Council in the 5th District, filed for the ballot for the May 6 election in the city secretary’s office here Jan. 18. “We…