Members and supporters of the Socialist Workers Party in the U.S. and sister Communist Leagues in Australia, Canada, New Zealand and the U.K. build their political activity around reaching out to working people on their doorsteps in cities, towns and rural areas. They find real interest in discussing the historic changes and imperialist decay worldwide and how to chart a way forward for the working class and the labor movement.

The party is stepping up campaigning, speaking out as tribunes for the oppressed and exploited. It stresses the need to unite working people across all the divisions the capitalist rulers foist on us.

The heart of these conversations is that workers must chart a course of independent political action to gain the confidence and experience to overturn the capitalist system. 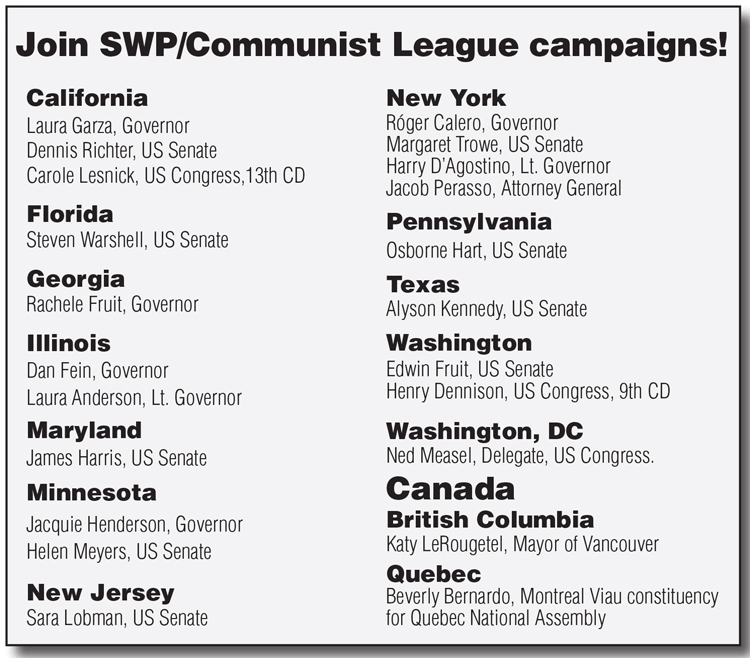 “Working people must be independent of the capitalist rulers, their parties and their state. We must build a revolutionary movement capable of taking power and organize a society that is not based on profits,” Alyson Kennedy, an SWP member in Dallas and the party’s candidate for U.S. Senate from Texas, told Jesus Alvarado as they met Aug. 20 on his doorstep in Grand Prairie, west of Dallas.

Alvarado told Kennedy he lost his job at a fabrication company in the 2008 capitalist economic crisis.

“I almost ended up homeless,” he said. “Now I’ve been an Uber driver for two years.”

“Yes, the economy is growing now,” Kennedy responded. “You see hiring signs everywhere. But to improve stagnant wages and increasingly dangerous conditions, we need to build a movement of working people. Nothing will be given to us.”

Alvarado decided to get Are They Rich Because They’re Smart?  by SWP National Secretary Jack Barnes, one of five books on special, saying he liked the title. (See ad below.)

Marysol Ipina, who lives across the street from Alvarado, signed up for the Militant after hearing what the SWP stands for. She told Kennedy she has worked 15 years as a maintenance worker. Now the company told them that with a new president coming in there will be more pressure to check papers, targeting immigrants.

“The Trump administration represents the wealthy capitalists who want to keep immigrant workers in fear of fighting for their rights,” Kennedy said. “But this is nothing new. William Clinton signed the Illegal Immigration Reform and Immigrant Responsibility Act in 1996, which has underpinned the anti-working-class raids and deportations every president since then has carried out, Democrats and Republicans alike.

“There is no sweeping ‘swing to the right’ by Trump, much less by the workers who voted for him, seeking change,” said Kennedy. “His foreign policy moves in Korea, the Mideast and elsewhere, no matter what his intention, can open up space for working people to gain confidence to fight and build the labor movement.”

Kennedy got a chance to come back to this theme when she met Jose Contreras in Irving, Texas, Sept. 3. They talked about Korea and the summit between President Trump and North Korean leader Kim Jong Un.

“They hide a lot of stuff,” Contreras said. “There’s a war between North and South Korea that’s hidden. There was no South Korea or North Korea, it used to be one country.”

“Yes, they hide that Korea was forcibly divided by the U.S. and the Soviet Union after World War II and why the U.S. brutally invaded North Korea during the Korean War,” Kennedy said. “Today there are tens of thousands of U.S. troops there to enforce that division. Just think what it will mean if the threat of war is gone, the threat of nuclear missiles gone in that part of the world.”

“They came and raided from every entrance there was,” Dennis Perry, a Load Tail worker, explained in the Aug. 28 Dallas Morning News. “They drew their guns and told everyone to hit the ground. Some workers went running. They were tackled. A few workers hid by shelves but were quickly discovered.

Perry watched as dozens of his co-workers were taken away in buses. “They are trying to support their families,” he said. “I couldn’t call anyone on them. In my work, you get to know a lot of these guys.”

Kennedy and other SWP supporters traveled to Paris, 12 miles east of Sumner, the day after the raid to talk with workers there.

“My brother was picked up by ICE,” Raciel Mozo told them. He’s in a detention center in Oklahoma. They told us we’d have to come up with $7,500 to get him out on bond.” Mozo said that a local church is organizing support for the families.

The following day Kennedy spoke at a protest against the raid in front of the Immigration and Customs Enforcement headquarters in Dallas.

“The bosses use attacks on immigrant workers to exploit their labor and drive down wages and working conditions for the whole working class. And the bosses and their parties, the Democrats and Republicans, blame the ‘Mexicans’ for stealing jobs and lowering wages,” she said. “Fighting for amnesty for all workers without papers in the U.S. is a life-and-death question for the labor movement and our fight for unity and solidarity.”

‘Is the Labour Party the answer?’

“The government doesn’t care for working-class people,” Colin Johnson, a retired care worker, told Communist League member Pamela Holmes when they met Sept. 1 on his doorstep in Harlow, near London. “I’ve always voted Labour as the lesser of two evils. But they seem much of the same. It looks like they want to make us vote on Brexit again and again, until we vote the way they want.”

“The Labour-Tories shell game is a trap, it gives the appearance that workers have a choice,” said Holmes, a production line worker at a nearby pharmaceutical plant. “Labour is also a capitalist party. It pushes the line that workers should be looking to the capitalist rulers’ state for care and protection. But we need a political course completely independent of the capitalist state, and a party that can lead a revolutionary movement of millions to overthrow capitalist rule and establish a workers and farmers government.”

Holmes explained that the Communist League is comprised of and led by workers themselves. This struck a chord with Johnson.

“Sometimes you get a ‘leader’ who says popular things and gets into government only to then act like those before him — and for himself!” he said. “You see that in other countries too.”

He signed up for a Militant subscription and got a copy of Are They Rich Because They’re Smart?

While knocking on doors Aug. 22 in North Long Beach, California, Dennis Richter, SWP member and the party’s candidate for U.S. Senate from California, met 26-year-old Jessica Herrera. She told him that she works at a 7-Eleven store that was raided by immigration cops. She said one of her co-workers was arrested and others fled.

“We can win most workers to the fight for amnesty,” Richter said. “They don’t like factories being raided and their friends, neighbors and co-workers being picked up by immigration cops.”

Herrera got Are They RichBecause They’re Smart? and her sister, a student at a local community college, chose another book on special, “It’s the Poor Who Face the Savagery of the US ‘Justice’ System”: The Cuban Five Talk About Their Lives Within the US Working Class. She said she is interested in conditions working people face in prison. They also kicked in a contribution towards the party’s work.

To join in the SWP’s door-to-door discussions with fellow workers, or learn more about the party, contact the nearest branch in the directory.

‘Advance the revolutionary mobilization of workers’

The following statement was issued Sept. 3 by Róger Calero, Socialist Workers Party candidate for governor of New York. Ceaseless competition for markets, financial exploitation and profits among the bosses compels them to assault our wages, rights and working conditions,…