The propertied rulers organize their exploitation of working people, their wars and their class rule through the capitalist two party system. Workers will be urged and badgered to choose between the lesser of two evils this November and subordinate our own interests to one of the parties that defends the rule of the exploiters.

The Militant urges workers to back the Socialist Workers Party candidates who speak out for and join struggles of working people here and worldwide. They raise proposals to defend workers’ interests, build unity and explain developments in world politics. They explain our conditions will not be advanced by electing either wing of the Democrats, the reformers of capitalism or the meritocratic liberals; nor Republicans of any stripe, from Trump to Never Trumpers; nor those presenting themselves as “independent” third party defenders of capitalism. 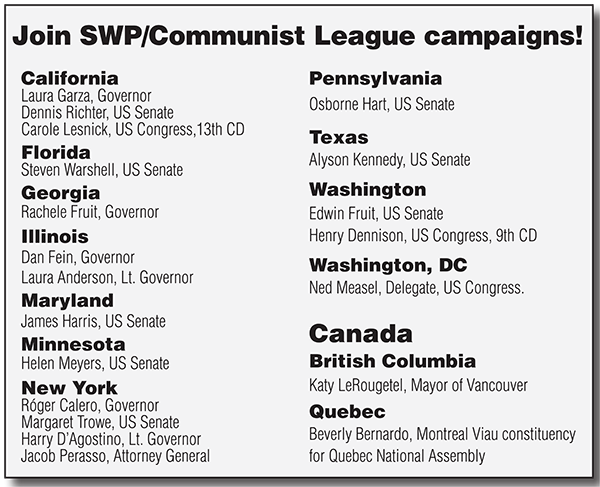 Workers confront a system incapable of meeting our basic needs: government indifference to the conditions of veterans of the U.S. rulers’ bloody wars; its inability to offer a fruitful life under capitalism to the growing numbers of people who succumb to opioid addiction; a criminal “justice” system built on cop brutality and killings, the plea-bargain highway to prison, and new restrictions on access to books for workers behind bars. These are symptoms of capitalist morality. They’re built into the rule of the profit-driven capitalist class.

The SWP joins in actions by workers and farmers today to defend themselves from the attacks by the bosses and their government. The party demands amnesty for all workers here without papers the rulers consider proper; joins meetings and protests backing working farmers squeezed between high production costs and the low prices they get; and backs women fighting for the right to choose abortion.

SWP candidates explain that deeper class battles and revolutionary struggles will be forced on working people by the assaults of the bosses in coming years. In struggle workers will become more conscious of our interests as an international class, more self-confident and more courageous in the face of the rulers’ assaults. We will be transformed by our experiences, becoming capable of doing here what workers and their allies did in Cuba in 1959, in Grenada in 1979, in Burkina Faso in 1983, and in Russia in 1917. They took power, defended themselves and deepened workers control in the factories and the fields, joining the worldwide struggle for socialism.

Today SWP members engage in discussion and debate about this perspective with workers on their doorsteps around the country. There is a thirst among millions of workers to find a way forward and to learn more about revolutionary leaders of the working class from Malcolm X, to Fidel Castro and Thomas Sankara, and to read books written today by SWP leaders that explain how the working-class party we need can be built. Join the SWP campaign!