The Florida Department of Corrections overturned the impoundment of issue no. 29 of the Militant Sept. 12. The department’s Literature Review Committee also recently overturned the ban on five other issues of the paper. These are victories for all those who defend the right of free speech and the press and for the rights of workers behind bars.

At the same meeting the committee decided not to reverse Florida State Prison officials’ decision to impound issue no. 25. They declined to give any explanation.

In the last year and a half, Florida officials have banned at least 18 issues of the paper, but then overturned the ban on all but a few after the Militant protested. Amnesty International, PEN America, the National Lawyers Guild, chapters of the American Civil Liberties Union, church groups and others have often joined in demanding reversal of the bans.

The only thing the bans have in common is they are “arbitrary, irrational, inconsistent, unlawful, and unconstitutional,” in the words of Militant attorney David Goldstein from the well-known law firm Rabinowitz, Boudin, Standard, Krinsky & Lieberman.

Every impoundment notice so far has falsely claimed that the paper “presents a threat to the security, good order, or discipline” of the prison. Some point to specific articles prison authorities don’t like, others give no reason. What they really don’t like is the politics of the Militant, which point a road forward for workers — inside and outside the propertied rulers’ prisons — in the face of the crisis of capitalism.

There is no difference in the politics of issue no. 25 and no. 29. Issue no. 25 had front page articles on the fight for amnesty for all immigrants in the U.S., protests against the police killing of Antwon Rose in Pittsburgh, U.N. hearings on Puerto Rico’s struggle for independence, the Socialist Workers Party-sponsored Active Workers Conference in Oberlin, Ohio, an article on the fight against previous prison censorship in Florida, and an editorial explaining why workers should oppose the call by some liberals to harass supporters of Donald Trump.

Issue no. 29 was banned, Tomoka Correctional Institution authorities said, because of “Page 1-3.” The articles on these pages reported on protests against a killing by cops in Chicago, the launching of the Socialist Workers Party 2018 election campaigns, protests and political developments in Iraq, and an article on openings for the working class as the imperialist “world order” unravels. This issue didn’t have any coverage of the Militant’s fight against prison censorship, but numerous previous issues did and were either not banned or their bans were overturned.

The Militant was totally banned, in violation of federal regulations, by prison officials at the Federal Correctional Institution in Greenville, Illinois, in June.

The reason? It is “associated with the Socialist Workers Party and encourages change by protesting and striking.”

The decision was sent back for further review in August by Federal Bureau of Prisons Regional Director Sara Revell, but the Militant hasn’t heard anything since. Goldstein wrote Revell Sept. 14 asking where things stand. 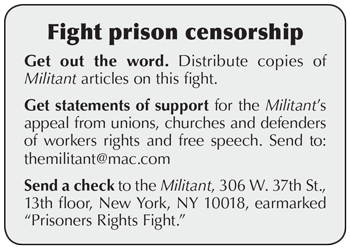 “As the class struggle heats up, we will see more attempts by prison officials to cut workers behind bars off from the world,” Militant editor John Studer said Sept. 17. “In Pennsylvania right now government and prison authorities are restricting prisoners’ access to books and periodicals across the board.

“That’s why the fights against censorship of the Militant are so important,” Studer said. “They are part of the broader fight to defend critically needed political rights today and help to break down barriers among workers. These are rights won in the Constitution and defended in blood by working people over decades.

“We encourage all those who back the Militant’s fight against censorship to keep up the pressure,” he said, “and to join with those opposing the unconstitutional restrictions on books, periodicals and letters in Pennsylvania.”