“The problems that the working class faces — and working farmers — are the result of the decay of the capitalist system that we live under, and that only by uniting and building a working-class movement in struggle can we fight to change the conditions that we face and that working people have no political voice,” Rachele Fruit, Socialist Workers Party candidate for governor in Georgia, said in an interview printed in the Nov. 4 Albany Herald.

She was on a three-day tour through southern Georgia and the Florida Panhandle, areas hard hit by Hurricane Michael and the social catastrophe there caused by the crisis of the capitalist system.

She was accompanied by farmers Willie Head from Georgia and Karl Butts from Florida.

“We need to break with both parties” of the capitalist rulers, the Democrats and Republicans, Fruit told the Herald. “They’re both the parties of our bosses.”

“There’s no reason in this society, in this world today, that every human being — as a human right — doesn’t have health care from the time they’re born to the time they die,” Fruit told the paper. “Under our society, education, health care, things that should be basic human rights, are commodities. They’re bought and sold. If you have money to buy, you can. If you don’t have money to buy, too bad for you.”

“Fruit said the narrative promoted by politicians, especially liberals, is that the working class is more racist today and that there is a rising rightist movement,” the Herald wrote. “She said that the Socialist Workers Party disagrees with that notion.”

Fruit and 18 other SWP candidates in 11 states and the District of Columbia have been visiting workers’ strike picket lines; pressing for higher wages and more workers control on the job to enforce safety; joining protests against deportations and raising the demand for amnesty for all immigrants in the U.S.; supporting women’s right to choose abortion; marching against cop brutality and police murders like the killing of Antwon Rose in Pittsburgh; and talking with workers about working-class politics on their doorsteps in cities, small towns and rural areas.

The SWP says workers need to build unions and fight for their rights against the capitalists’ state and their parties, on a course to lead all the oppressed and exploited in the fight for a workers and farmers government.

Party branches across the country are organizing public forums over the Nov. 9-10 weekend to discuss the results of the midterm elections and implications for the struggles of working people. Presentations will assess the impact of the SWP’s campaigns and next steps in building the working-class movement.

The anti-Trump-driven liberals had hoped that they would see a “blue wave” Nov. 6 that would win them both houses of Congress and governorships across the country. In the U.S., the minority capitalist party traditionally makes big gains in midterm elections as workers try to find a way to register their anger at the fact the last elections produced more of the same economic and social calamity.

But the result this time was further division. The Democrats won a majority in the House while the Republicans increased their edge in the Senate. Donald Trump continues in the White House. Republicans won elections in states where Trump campaigned the most.

This split is good for the working class, as logjams like this slow down the ability of the ruling rich to use their government against working people.

The middle-class left continues its march into the Democratic Party, one of the two parties of capitalist rule. They herald the election of a handful of Democrats who are members of the Democratic Socialists of America, led by Alexandria Ocasio-Cortez from New York, who promote reforms to make capitalist rule “nicer.” In its postelection coverage, In These Times says, “Today, the electoral sphere seems to be the most promising place for advancing left politics.”

The Socialist Workers Party campaign is based on the opposite axis. The “most promising place” today is in the discussions and debates taking place among working people, who are looking for a way to fight effectively against the impact of the unfolding capitalist crisis and break from the twin parties of capitalist rule.

With the elections over, the SWP is looking to the next four weeks — the second half of the party’s campaign to take the Militant and books by SWP leaders to workers on their doorsteps and in strikes and other actions and win new readers and contacts. To speak as “tribunes of the people” and promote the deepening unity of working people in action.

As part of the effort, the SWP is also carrying out a drive to raise $100,000 to fund the ongoing work of the party.

Joined by campaign supporters Susan LaMont from Atlanta and Chuck Guerra from Miami, and eggplant farmer Karl Butts from Plant City, Florida, Rachele Fruit campaigned in Florida’s Panhandle Nov. 2. The team also campaigned for Steve Warshell, SWP candidate for U.S. Senate in Florida, and for a “yes” vote on Amendment 4, which seeks to restore voting rights to many workers convicted of felonies who have served their prison terms.

“My brother just did five years for being in the area where a robbery took place,” said Gary Baker, who works for Farmshare, a large-scale food bank in Quincy that operates at the now-closed farmers’ market there. Lawyers said that “my brother would do 15 years if a jury didn’t acquit him at trial, so he agreed to a plea bargain. Yes, I’ll vote for Amendment 4!” The amendment passed, winning 64 percent of the vote.

The previous day, the socialist campaigners attended a memorial service at Trinity Episcopal Church in Apalachicola on the Gulf Coast, held in solidarity with the Tree of Life synagogue in Pittsburgh, where 11 members were killed in an anti-Semitic assault Oct. 27.

Members of the congregation thanked Fruit and her supporters for coming. Several took statements by SWP candidate for U.S. Senate in Pennsylvania Osborne Hart condemning the murders and explaining the deadly threat of Jew-hatred to the working class.

“This kind of Jew-hatred, and its murderous consequences, rises to the surface in times of crisis under capitalism, as class tensions sharpen,” Hart said.

“There is no broad expansion of rightist or fascist currents in the United States today. And the owners of industry and finance don’t feel the need to turn to the goons and thugs of fascist gangs to preserve their class rule,” he said. “They continue to rely on their Democratic and Republican parties, and their two-party shell game, to keep workers and others picking the ‘lesser evil.’ Much of today’s anti-Semitism comes from the middle-class left, forces whose opposition to Israel carries over into broader Jew-hatred.”

“We join in fighting Jew-hatred and anti-Semitic attacks,” Hart said, “wherever and whenever they occur.”

No to Washington’s wars!

Carole Lesnick, Socialist Workers candidate for Congress in the 13th Congressional District in the Bay Area, joined a rally protesting Washington’s intervention in the devastating war in Yemen Nov. 4.

“Both the Democratic and Republican parties support Washington’s participation in wars in the Middle East, which are fought in the interests of the ruling rich,” Lesnick told Malik Stewart, a transit worker who stopped by the protest.

“I was glad to see the signs here saying, ‘U.S. out of the Middle East,’” Stewart told her. “I think the people here and the people there don’t want these wars. We need to support one another.”

To join the Socialist Workers Party in its ongoing campaigning, or to make a contribution to the SWP Party-Building Fund, contact the branch nearest you.

Susan LaMont in Atlanta contributed to this article. 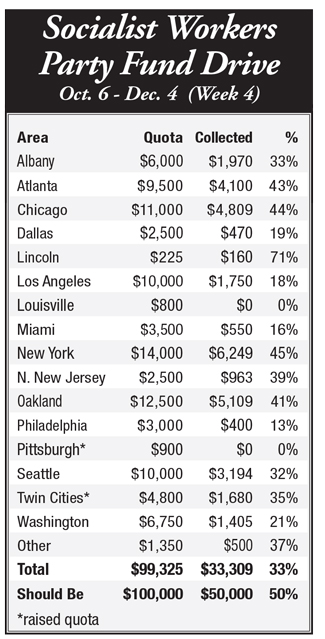 Millions of workers see in their own lives and lives of those they love how working people face the debilitating effects of the ongoing economic, political and moral crisis of capitalist rule. The bosses and their government have nothing to…

Join in denouncing Jew-hatred, a deadly threat to working class