In another — but unexpected — victory in the fight against prison censorship of the Militant,  the Florida prison system’s Literature Review Committee says it made “an error” in upholding the ban on the Sept. 17 issue of the paper. Committee Chair Dean Peterson says the issue “is, and will continue to be, allowed into FDC [Florida Department of Corrections] Institutions.”

“We’re pleased that the Literature Review Committee has overturned the ban,” said Militant  editor John Studer. “But this is at least the 18th time in two years Florida prison officials have impounded issues of the paper, forcing us to spend time, effort and money to challenge the bans.

“Even if most are overturned, the Militant  shouldn’t have been impounded in the first place,” Studer said. “Our readers behind prison walls have the right to read literature and newspapers of their choosing, to think for themselves, to be part of the world.”

In a Nov. 19 email to David Goldstein, the Militant’s  attorney, Peterson sent a “timeline” to try to explain the “error.”

Sept. 13, Florida State Prison impounded the issue. A week later the Tomoka Correctional Institution, citing “slightly different rule criteria and exemplar pages,” also impounded it, Peterson says. He neglects to mention the Militant  was never notified about Tomoka, much less the “different” criteria, as their own regulations require.

Sept. 22, Goldstein asked for and received an extension of time to submit an appeal.

Sept. 26 the Review Committee discussed the impoundment and overturned it, but never informed the Militant  or Goldstein.

Oct. 15,  Goldstein filed the Militant’s  appeal. Oct. 17, the committee reviewed the appeal and upheld the ban. Oct. 24, Peterson informed Goldstein the appeal had been denied.

Although not part of Peterson’s “timeline,” between Oct. 24 and his report of the “error” and reversal of the ban, it’s worth noting that Amnesty International USA and PEN America sent letters calling for overturning the ban on the issue.

“We cannot penalize you for making an appeal” after the impoundment was overturned, Peterson wrote, and therefore the second ban was revoked.

He doesn’t even begin to try and explain how the committee could approve the issue one day and ban it on another. What does this say about their criteria?

To impound an issue of the Militant,  or any other publication, Florida state prison officials check off a generic reason on a multiple choice form. Among their favorite choices are utterly false claims that one or another Militant  article could encourage “physical violence,” “riot, insurrection” or “disruption of the institution.”

In the Sept. 17 issue, officials at Florida State Prison cited two articles, one on the successful and widely publicized fight against solitary confinement in California and the other on the hunger strike by Crimean film director Oleg Sentsov, who was framed up, tortured and imprisoned in the Siberian gulag of Russian President Vladimir Putin.

As the letter from Karin Deutsch Karlekar, director of Free Expression at Risk Programs at PEN
America, points out, “Prisoners have a right to read the Militant’s reports of current prison conditions and protests around the globe.”

Readers of the Militant  can help advance the fight for an end to the impoundments. Get your 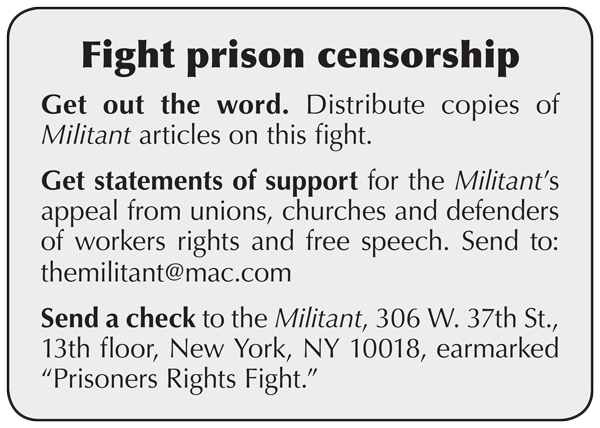