“We’re going to go all over Texas,” George Chalmers, who is organizing the campaigning, said by phone Jan. 8. As she campaigns, Kennedy explains that no movement to defend the interests of working people can be successful and take political power out of the hands of the capitalist class unless it unites in struggle those who labor in big cities, small towns and farm areas.

Supporters of the Socialist Workers Party from around the country are heading to Texas to help campaign.

“There’s rail lines that radiate out of Dallas all over the state,” Chalmers said. “And a lot of small towns dot the rail lines. We’re going to follow the rail tracks and knock on workers’ doors to introduce the party and its working-class program.”

“We’re going to talk to cattle ranchers, farmworkers, rail workers, truck drivers, U.S.-born workers and immigrants,” he said. “And as we do so, we’ll also go to working-class neighborhoods in every corner of Dallas to get the signatures we need to put Kennedy on the ballot.” She filed her candidacy Jan. 8.

“We’ll find out more about the conditions workers, farmers and small proprietors face and meet people who are interested in learning about the Socialist Workers Party,” Chalmers said. “Some will want to join.”

Like elsewhere in Texas and across the country, working people in the Dallas-Ft. Worth area are being hit hard by boss and government attacks as they try and boost profit rates amid an ongoing crisis of capitalist production and trade. “People get angry when we explain that at least 52 construction and other workers have been killed on the job here over the last two years,” Chalmers said.

Kennedy says not one worker should die on the job. Workers need to organize and fight to win control over conditions on the job to ensure that everything they do is done safely. When she worked as an underground coal miner, Kennedy explains, this was what the United Mine Workers union fought for and, at least for a period of time, won.

“Already some of Kennedy’s co-workers at Walmart are going to take petitions to sign people up to put her on the ballot,” Chalmers said. “We’re inviting people to help out, campaign with us, take flyers, take petitions, show their friends, relatives and co-workers the Militant  and books by leaders of the Socialist Workers Party and about the example of the Cuban Revolution.”

The SWP is running over a dozen candidates in 10 states. “We aim to speak in the interests of all the exploited and oppressed,” SWP national campaign director John Studer told the Militant. “We explain working people need to build a movement of millions to fight to defend ourselves against the attacks of the bosses, their parties and their government, and to organize to take political power into our own hands.”

Kennedy and other party members went knocking on workers’ doors in North Dallas Jan. 8. “We’re calling for all U.S. troops to get out of the Middle East and Afghanistan,” Kennedy told those they met. “Working people there need to fight to control their own destiny. The best way workers in the U.S. can help them find a road forward is to demand Washington get out now.”

Jorge Méndez, 22, a cook, was one of the people they met. “Life in the U.S. is better than in Mexico,” Méndez said. “The money here is low, but it’s still way more than in Mexico.”

That’s true, Kennedy said. “In fact, U.S. capitalists want immigrants without ‘proper’ work papers, so they can pay them less than U.S.-born workers and drive down wages of everyone,” she said. “Their government opens and closes the border based on the bosses’ need for labor. And they try to drive a wedge between immigrant and native-born workers to better exploit both and to point us away from our real problem — the capitalist rulers and their government.”

“The Socialist Workers Party fights for amnesty for the more than 11 million undocumented workers in the U.S. today,” she said. “That’s how we can build strong unions and unite the working class.”

They also spoke to dental student Barett Andreson who said that the health care system is broken and has to be “fixed.”

Health care in the U.S. “is based on making profit,” Kennedy said, “not on keeping you healthy. We’re for universal, government-funded health care from cradle to grave, not health insurance. Insurance plans, like Obamacare, are structured to profit the medical and pharmaceutical industries, not get us taken care of.

“The Cuban Revolution is an example of what is possible when working people make decisions based on human need not profit,” she said. “Working people there fought and took power. They transformed health care, education and other social needs into a human right. And they send doctors and other medical volunteers out wherever they’re needed, like they did in the fight against Ebola in Africa.”

Kennedy and her campaign are helping to build the April 21-May 5 International Volunteer Work Brigade to Cuba, where workers and youth can go see the Cuban Revolution for themselves.

Anyone interested in helping the SWP campaign in Texas should email the campaign at dallasswp@gmail.com. 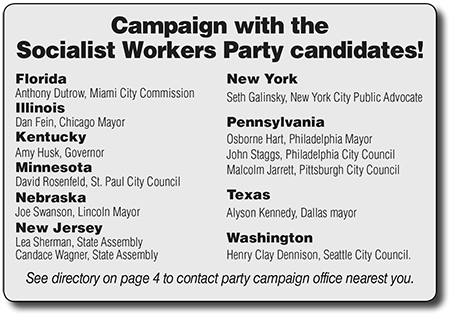