Alyson Kennedy, Socialist Workers Party candidate for mayor of Dallas, turned in over 700 signatures and was told Feb. 7 that she was on the ballot.

Her supporters are taking advantage of this victory to reach more broadly, knocking on doors in working-class neighborhoods in cities and small towns in the region. Some of those who’ve met Kennedy have joined on campaigning trips to help spread the word about the party’s program.

After supporters of Kennedy’s campaign went door to door to talk with workers they stopped at a Chili’s restaurant in Dallas to get something to eat. They met Devion Linthecome-Darden, who works there as a waiter. Since the restaurant was slow, he joined their political discussion and decided to get involved in the campaign. He’s since gone door-to-door campaigning for Kennedy in Dallas.

“I joined the campaign,” he told SWP Dallas campaign manager George Chalmers, “because I feel like capitalism affects most people negatively, and the ones who benefit from it either don’t care or they actively want to affect people negatively to benefit themselves more.”

“This is a fundamental issue that needs to be addressed,” he said.

He bought all six books advertised below, including the new book In Defense of the US Working Class  by Socialist Workers Party leader Mary-Alice Waters. And he subscribed to the Militant.

Mathias Vazquez, a retail co-worker of one of the SWP campaigners, also volunteered to join the door-to-door campaigning and accompanied Kennedy to a recent candidates forum. Before moving to Dallas he was a veteran of the peasants’ fight for land in Mexico.

Joseph, a young electrician, emailed Kennedy after he read an article about the SWP campaign in the Dallas Morning News. He had coffee with Kennedy and her campaign manager, subscribed to the Militant  and bought In Defense of the US Working Class  and Malcolm X, Black Liberation, and the Road to Workers Power  by SWP National Secretary Jack Barnes. He joined a door to door  campaign team in northwest Dallas, and met a house cleaner attracted to the politics of the SWP campaign who decided to get a copy of  In Defense of the US Working Class.

After campaigning, Joseph got two more books — The Clintons’ Anti-Working-Class Record; and  Are they Rich Because They’re Smart?

Kennedy, the only working-class candidate, debated Feb. 12 with veterans of the Dallas capitalist establishment who make up the rest of the mayoral candidates. Some 200 people attended the panel event at the Texas Theatre, sponsored by the League of United Latin American Citizens — one of the oldest and largest Latino organizations in the United States — and ECO Latino Radio.

When they were asked what each had to say about immigration, Kennedy replied that her campaign was fighting for amnesty for all those in the U.S. without papers the authorities consider sufficient. Amnesty is in the interests of the whole working class, she said, and would help workers build unity and solidarity to fight against attacks from the bosses and their government. It’s a fight working people can win, she said.

Kennedy pointed to how millions of workers, mainly Mexicans but many others, went into the streets in 2006 and defeated the Sensenbrenner bill. The bill would have made it a crime for anyone to assist someone without papers. “In Dallas, half a million people demonstrated on May Day that year,” she said.

The SWP candidate called for the conviction and jailing of Amber Guyger, the Dallas cop who killed Botham Jean last September in his apartment. “We have to keep protesting on this,” she said to applause.

Sitting alongside several candidates who represent real estate or related business interests, Kennedy described how she meets workers while campaigning door to door. Many said that  “as property taxes got too high, they were forced to sell out.” And then, “real estate brokers moved in to build luxury apartments and houses and made a killing.”

As a Walmart worker getting $11 an hour, Kennedy explained why a lot of people can’t survive except by working two or three jobs. The SWP is part of the fight for at least a $15 minimum wage, and more.

Kennedy said there was an alternative to the deprivations imposed on working people by the crisis of capitalism, and explained how workers and farmers in Cuba rose up and took political power into their own hands in 1959, making a socialist revolution that stands tall today.

She invited people to join the May Day International Volunteer Work Brigade to Cuba that runs from April 21 to May 5 to see the Cuban Revolution for themselves. After the meeting, four young African-Americans came up to meet her, saying, “Miss Kennedy, that was great!” Three of them have signed up for more information about going on the May Day brigade.

Linthecome-Darden, who SWP campaigners had met at Chili’s earlier, also came to the debate to help with the campaign table there, displaying a range of books by SWP leaders and other revolutionaries. He said that both he and his roommate, who works at the same restaurant, are interested in going on the May Day brigade.

She ‘wants to start a revolution’

“Dallas Mayoral Candidate Alyson Kennedy Wants to Start the Revolution” was the headline of an interview published in the “Frontburner” column in the online and print publication, D Magazine.

Interviewer Shawn Shinneman explained Kennedy had also been the SWP’s 2016 presidential candidate and in 2019 the party is “arranging for candidates to run on its platform in 10 states.”

“We have confidence that in the coming years we’re going to see bigger struggles by workers and farmers for our rights and to change our conditions,” she continued. “We will build the kind of movement in this country that will take political power for our side, and reorganize and build a new kind of society. A society that’s capable of meeting the needs of the vast majority.”

The full interview can be viewed at: https://www.prestonhollowpeople.com/2019/02/07/former-presidential-candidate-runs-for-dallas-mayor/.

If you’d like to find out more about the SWP or get involved in the campaign, contact the party branch nearest you listed here. 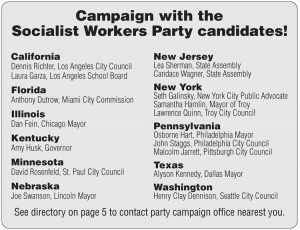 The following statement was issued Feb. 13 by Osborne Hart, Socialist Workers Party candidate for mayor in Philadelphia. When President Donald Trump declared “America will never be a socialist country,” he was referring to the “socialism” presented today by Democrats…