When President Donald Trump declared “America will never be a socialist country,” he was referring to the “socialism” presented today by Democrats such as Alexandria Ocasio-Cortez. Like fellow liberals, these “socialists” view working people with disdain and fear, as objects to be regulated, and controlled when necessary “for their own good,” as Ocasio-Cortez and her ilk attempt to manage the rule of the capitalist class. They seek to corral workers into the Democratic Party and the capitalist rulers’ two-party system.

Their solutions to the crisis workers and farmers face today are to strengthen and expand the capitalist government bureaucracy to carry out welfare programs to make our lives better. They strive to act for us — they know best — the opposite of mobilizing working people to fight for our class interests.

Their efforts to make capitalism “fairer” obscure the irreconcilable class interests of working people and the ruling capitalist families. The cops, courts and the state bureaucracy are organized to defend the entrenched interests of the capitalist ruling families.

Trump is right about one thing — workers despise the kind of government bureaucracy these “socialists” glory in. They don’t want more government, but to get the government off our backs.

In his attack on “socialism,” Trump declared that Americans are “born free.” The truth is working people are born under the dictatorship of capital.

What the Socialist Workers Party joins workers in fighting for is something qualitatively different. It’s not words, or labels or a doctrine. It’s building a mighty movement of workers, farmers and others exploited and oppressed by capital to fight for our interests. It has to be organized independent of the bosses, their parties and their government, on a course to take political power out of the hands of the propertied rulers and to build a workers and farmers government.

The SWP campaign in 2019 is running against all those who say workers can find solutions in the capitalist parties. They present what is explained by SWP National Secretary Jack Barnes in the book Malcolm X, Black Liberation, and the Road to Workers Power:

“Only the conquest, and exercise of state power by the working class and expropriation of finance capital can lay the foundations for a world based not on exploitation, violence, racial discrimination, class-based pecking orders, and dog-eat-dog competition, but on solidarity among working people that encourages the creativity and recognition of the worth of every individual. … A socialist world.” Join the SWP campaign! 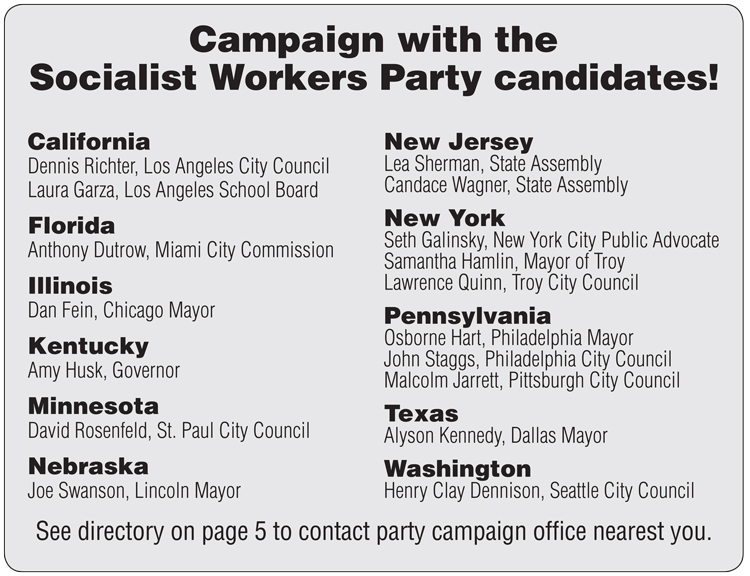 ‘Amnesty for immigrants in US, unify the working class’

Alyson Kennedy, Socialist Workers Party candidate for mayor of Dallas, turned in over 700 signatures and was told Feb. 7 that she was on the ballot.  Her supporters are taking advantage of this victory to reach more broadly, knocking on…