When Dennis Richter, Socialist Workers Party candidate for Los Angeles City Council, knocked on the door of Lenin Mendoza Feb. 24, and explained some of the politics and perspectives his campaign is raising, Mendoza, a hospital worker, invited Richter to join him and his two friends, a machine operator and a car salesman, in his garage. Richter and SWP campaign supporters were raising the SWP program with workers door to door in Reseda in the San Fernando Valley.

“We’ve just now been talking about this — how hard it’s getting for people to pay for basic necessities,” Mendoza said. “Sometimes I think prisoners are better off. At least they’ve got somewhere to sleep, three meals a day and medical care.”

“Under capitalism a lot more is taken from workers in prison than given. Prisons are set up to take away workers’ humanity — to brutalize and intimidate you and break down all vestiges of solidarity,” Richter said. “In California the state prison bosses are notorious for their use of solitary confinement. At the Terminal Island federal prison in San Pedro, over 200 prisoners were held for weeks in unheated quarters as temperatures plunged into the 40s.

“The mistreatment continues after you get out of prison. It’s harder to get a job and your right to vote is often taken away. You shouldn’t have to give up your right to vote if you’ve been sent to prison,” Richter said. He pointed to the recent victory in Florida where voters overwhelmingly approved a constitutional amendment that restored the right to vote to 1.4 million former prisoners with a felony conviction.

Mendoza bought a copy of In Defense of the US Working Class  by SWP leader Mary-Alice Waters, as well as an introductory subscription to the Militant. He gave the SWP campaigners bottles of water and a promise to get together again soon to continue the discussion.

Richter’s running mate, Laura Garza, SWP candidate for Los Angeles School Board District 5, spoke out at a candidates’ forum Feb. 27. It was attended by over 200 students, parents and teachers at the Alliance Margaret M. Bloomfield High School. This is a charter school in Huntington Park southeast of Los Angeles. The election is in May.

“I’m running to talk about the reality of the system we live in today, the capitalist system — with the rich at the top and working people at the bottom,” said Garza. “I walked the picket lines with the teachers during their strike in L.A. The rulers of this country, whether governed by a Republican or Democratic administration, don’t care whether we get an education. They only want to teach working people to be obedient. The only way this will change is when working people organize independently and take action to overthrow capitalist rule.

“My party, the Socialist Workers Party, explains that you can’t pretend to reform education under this system,” Garza said. “I’m for a fight to raise conditions for the whole working class. I will join those who are standing up and fighting today. We need to fight for the rights of immigrants, for amnesty for all those in the U.S. without papers, and to join in battles for unionization and for a substantial raise for workers.”

“The only way working people can really learn something today is by becoming part of working-class struggles. Malcolm X never graduated from high school,” she said. “He learned to read in prison as he was preparing himself to fight for Black rights when he got out. He explained you need to learn to read, to think for yourself to fight against capitalist rule. He said the key thing wasn’t to learn you were oppressed, but to learn your own self-worth.”

The various candidates and their supporters had literature on a table at the back of the room, where Garza and her campaign supporters had lively discussions with people both before and after the forum. They sold five books, including three copies of Are They Rich Because They’re Smart? Class, Privilege, and Learning Under Capitalism, by SWP National Secretary Jack Barnes.

Andrea Morell and Carole Lesnick met Maria Aguilar, a supermarket worker, when they campaigned door to door in Gilroy, California, some 70 miles from Oakland. Morell explained the need for organizing solidarity with the Oakland teachers, who were on strike, and the importance of workers advancing the demand for amnesty for undocumented workers. This will strengthen the labor movement, she said.

Aguilar said she agreed all workers need a union to protect themselves in the workplace. “I’d like to get together again and discuss these ideas more,” she said, taking out a six-month subscription to the Militant.

Socialist Workers Party branches around the country, and sister Communist Leagues in Australia, Canada, New Zealand and the U.K., take their election campaigns to workers on their doorsteps in cities large and small, and rural areas, as the heart of their political activity. Because of the ongoing capitalist economic, political and moral crisis, they find great interest in what road forward for the working class and the proposals of the SWP. They expand the reach of the party and its publications and meet workers who want to join in their activities.

The SWP is running a national slate of candidates in 12 cities across the country and campaigning for them everywhere. They speak in the interests of all those exploited and oppressed by capitalist rule.

To join with the SWP in campaigning on doorsteps, and at union pickets and social protests, or to find out more, contact the SWP or Communist League branch nearest you. See directory. 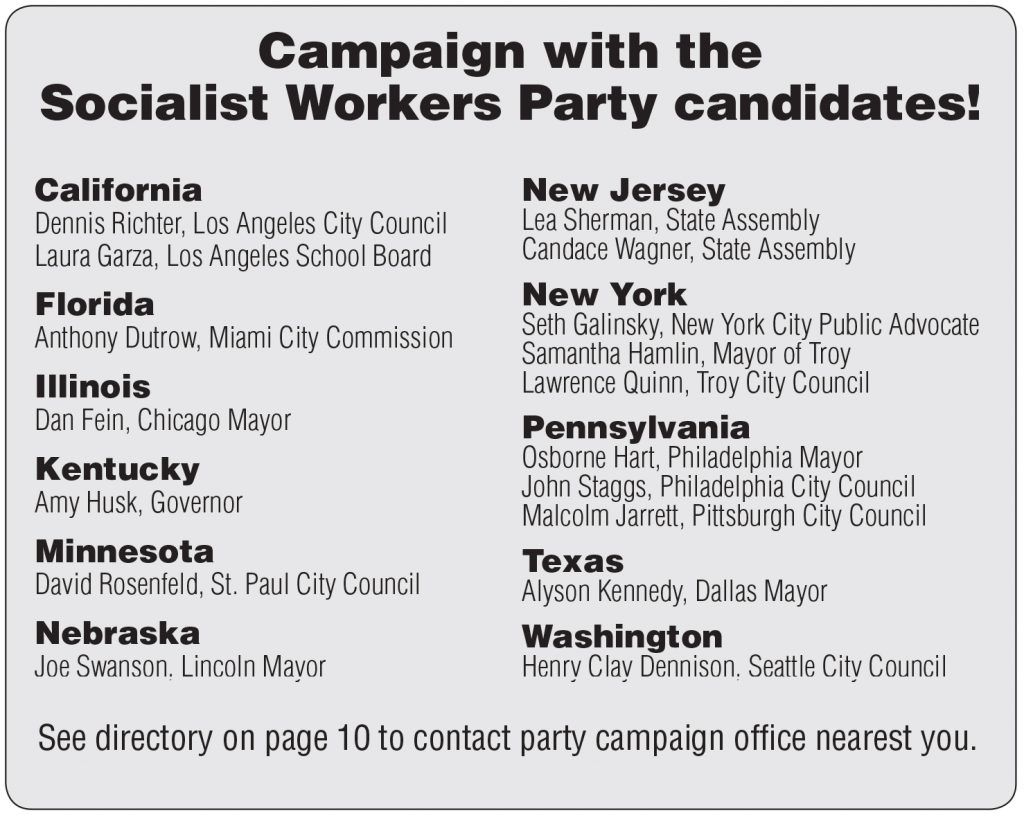 NEW YORK — The nearly 9,000 working people imprisoned in New York City jails have little or no access to books or periodicals. The fight to change this is part of a broader fight nationally for workers behind bars to…