The Florida prison system’s Literature Review Committee upheld the ban on four more issues of the Militant June 20, despite the fact it hadn’t yet received the paper’s appeal of the impoundments. They had previously agreed to extend the deadline for the appeal to June 28. In response to the Militant’s protest, they claim they can still give “full and de novo review and consideration” to the appeal.

The committee did not even inform the Militant of its rulings. Instead, the Militant learned about the committee’s decisions to uphold the bans on issues nos. 19, 20, 22 and 23 from the paper’s subscribers behind bars. The status of the ban on no. 18 is unclear.

The Militant’s attorney, David Goldstein, sent in the socialist newsweekly’s appeal as planned. The number of bans by local prison wardens upheld by the committee now stands at five of the last nine issues.

Florida prison officials want to squelch articles on the book Solitary: My Story of Transformation and Hope and related speaking tour by Albert Woodfox, who spent more than 40 years in solitary confinement in the notorious Angola prison in Louisiana. They claim these and articles reporting on the Militant’s campaign to win support for the fight against censorship “encourage activities which could lead to physical violence” or otherwise present a threat to the “security, good order or discipline” of the prison.

The Militant notes that nothing in prison rules authorize “prison officials to censor a newspaper merely because it reports on prison conditions or prisoners, or because such reporting is supportive of prisoner rights and contains criticism of prison conditions.”

The appeal includes a chilling appendix, prepared with the help of the  Florida American Civil Liberties Union, of dozens of articles from the Miami Herald reporting on brutality in Florida prisons.

The articles include wide coverage of the killing of inmate Darren Rainey, who was punitively locked up in a scalding-hot shower for nearly two hours by guards at the Dade Correctional Center. The Herald’s reporting, part of a three-year investigation into the abuse and deaths of prisoners in Florida prisons, received  awards.

A number of prisoner-subscribers reported to the Militant that the Herald and other “mainstream” papers have never been banned from the prison. All the evidence points to Florida officials “selectively banning the Militant because of its viewpoints,” Goldstein notes, which is unconstitutional.

‘Keep up the righteous fight’

“I’ve filed an appeal notice,” one prisoner, who just got out of solitary confinement, wrote. “I’ll be contesting this latest rejection. I want it to be known “that it’s nothing I read in the papers that cause me to react.”

It’s the conditions in the prison itself that are the problem, he said. The solitary confinement units “don’t have the proper cooling system. The water don’t work along with a lot of other inhumane conditions.”

“Keep the righteous fight up,” he writes.

Militant editor John Studer and this correspondent attended the American Library Association convention in Washington, D.C., June 22-23. The Office for Intellectual Freedom of the ALA and the Freedom to Read Foundation are signers on a letter from the National Coalition Against Censorship that calls on Florida prison officials to overturn the ban on the Militant. 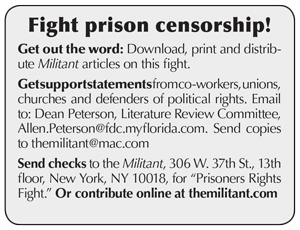 A number of the 18,000 participants, including some prison librarians, took information on the Militant’s fight and said they would get it out to others back home. One reported Woodfox’s book is available in prison libraries in Colorado and other states.

At a workshop on “Censorship Beyond Books” attended by some 200 conference participants, this correspondent got a round of applause when he spoke in the discussion to thank the American Library Association for its support and about the importance of standing up to prison censorship and defending the right of prisoners to read material of their choosing.

Amnesty International USA, the National Lawyers Guild and the ACLU of Florida have also sent letters calling on Florida officials to overturn the bans.

“Readers of the Militant can play an important role in advancing the fight against prison censorship,” Studer said July 2. “Getting a group of co-workers to write and sign a letter may seem like a small thing, but it can have an impact. Now is a good time to step up this work.”