Socialist Workers Party candidates and their supporters across the country are stepping up efforts to introduce the party, its working-class program and activities to workers and youth coming out of the party-sponsored 2019 International Active Workers Conference held June 13-15.

To strengthen the party’s campaigns, Alyson Kennedy, its 2016 presidential candidate and 2019 candidate for mayor of Dallas, and Malcolm Jarrett, the SWP candidate this year for Pittsburgh City Council, will visit different areas to join in campaigning on workers’ doorsteps, at local union strike picket lines, march in social protests, talk to the press and speak together at public meetings.

“Everywhere we go we’ll discuss why working people need to speak out against the U.S. rulers’ war threats against Iran, Venezuela and Cuba,” Jarrett said. Party candidates across the country have recently been participating in demonstrations calling for “U.S. hands off Iran!” and “End the sanctions!”

“We’ll be explaining the need for working people to break from the Democrats and Republicans, the two parties that represent the interests of the ruling rich and their political system,” Kennedy told the Militant.

At the Statehouse in Trenton, New Jersey, Lea Sherman and Candace Wagner, SWP candidates for New Jersey General Assembly, joined a rally June 27 demanding driver’s licenses for undocumented immigrants, sponsored by the immigrant rights group Cosecha. “Winning licenses serves to unite us. And it puts us in a stronger position to fight for amnesty for the 11 million immigrants without papers so we can organize and rebuild a fighting union movement,” Wagner, a union rail worker, told fellow protesters.

The same day members of the Communications Workers of America who gathered at the Statehouse to lobby government officials invited Cosecha members to speak on the fight for licenses. “We’ll continue to fight until we win licenses for everyone,” Norma Morales told some 100 people from both organizations. “We’re standing united, without papers and without fear,” added Caritina Hernandez. They got enthusiastic applause.

Sherman and Wagner will join Seth Galinsky, SWP candidate for New York City public advocate, at a campaign program at the opening of the new SWP hall at 3600 Bergenline in Union City July 6.

Rachele Fruit launched her campaign as SWP candidate for the Atlanta Board of Education at a Militant Labor Forum June 28. Two days earlier she joined an action called by the Georgia Peace and Justice Coalition demanding, “U.S. hands off Iran!” and “End U.S. sanctions now!”

There she met Thomas Proenza, a former graduate student and member of Democratic Socialists of America. He said he wanted to donate to the campaign, bought a subscription to the Militant and got a copy of the Militant supplement “Revolution, Counterrevolution and War in Iran.” It describes the working-class-led protests that swept 90 cities and towns across Iran early last year and presents the stakes for the working class in the wars and upheavals sweeping the region today.

Fruit and supporters campaigned door to door in Calhoun, an industrial town north of Atlanta June 22, where she met Moraima Thomas and her husband, Hector Ramirez, a truck driver from the Dominican Republic. When Fruit explained that the Cuban Revolution made health care a human right and not a commodity available only to those with enough money to pay, Thomas said, “I can tell you from personal experience that’s not how it is in the Dominican Republic.”

They subscribed to the Militant and bought three books, Is Socialist Revolution in the US Possible? and Are They Rich Because They’re Smart? by SWP National Secretary Jack Barnes and In Defense of the US Working Class by SWP leader Mary-Alice Waters.

Kennedy and Jarrett will kick off their national campaign trips in Louisville, Kentucky, July 12-14. They will join Amy Husk and Samir Hazboun, SWP candidates for governor and lieutenant governor in that state, campaigning in eastern Kentucky coal country, in Louisville and in southern Indiana. Supporters of the campaign are organizing both a public meeting and a barbecue for July 13.

The two socialist campaigners will join supporters in Pittsburgh July 19-21. In addition to campaigning in the region and speaking at a public event, they will help gather the final dozens of signatures to put Jarrett on the ballot.

The 2020 presidential election is well underway, with Joe Biden trending down and others rising as the over 20 Democrats jostling to represent the party against Donald Trump held their first debate. All of them — and Trump — claim they’re the best candidate to shore up and defend capitalist rule.

“Workers need an alternative, a fighting perspective and party of our own,” Kennedy said. A socialist and trade union fighter for more than 40 years, Kennedy is a member of the SWP National Committee. She was part of the first wave of women who got jobs as underground coal miners, helping break decades of discrimination and to strengthen working-class solidarity. Today she is a retail worker at Walmart in Dallas.

Jarrett, who works as a cook in Pittsburgh, has been building the party there, walking the picket line with members of the United Electrical Workers union during their strike against Wabtec in Erie, Pennsylvania, earlier this year.

“Working people know they can bring fights like this to the attention of our campaign, and together we can get the word out and help win solidarity,” said Jarrett.

Join the SWP campaigning! For more information about the candidates in your area, and future trips by Kennedy and Jarrett, see the directory.

Janice Lynn from Atlanta and Lea Sherman from New Jersey contributed to this article. 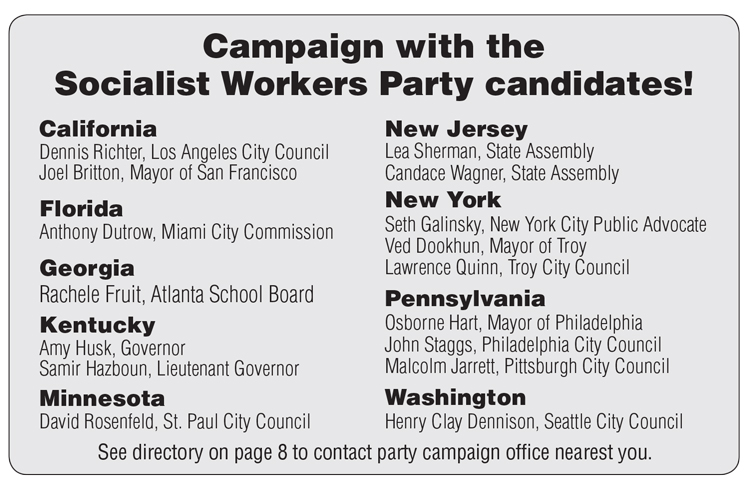 Join SWP on ‘right side of history’

The 2020 U.S. elections — with 16 months to go — are front-page news, as incumbent Donald Trump and some two dozen Democratic wannabes pound away at each other. All these Democratic and Republican politicians, whether self-proclaimed socialists, liberals or…