Kansas state prison officials overturned their ban on the Militant  July 5. This victory gives a boost to the fight against censorship in Florida, the only  prison system in the country that is systematically banning the Militant, in violation of the constitutional rights of the paper and its subscribers behind bars.

The Florida prison system’s Literature Review Committee informed the Militant  July 10 that it has upheld the ban on five impounded issues of the paper. They gave no reason for doing so.

That same day, Union Correctional prison officials impounded yet another issue of the Militant, simply for having an article about the fight against censorship. The warden checked the box on their impoundment form claiming the article “depicts, describes or encourages activities which may lead to the use of physical violence or group disruption.”

“Prisoners want to be able to read material of their own choosing, to think for themselves, to be part of the world, to educate themselves. Most working people support this right, it strengthens the unity of the working class,” said Militant  editor John Studer. “The absolutely false allegation that reading about the prison’s decision to censor news about their ongoing censorship could lead to violence is just an excuse the prison officials use to try to isolate and break the spirit of our brothers and sisters behind bars.”

The Militant  will appeal the latest ban and fight all efforts to censor the paper.

The Prison Ministry of  Riverside Church in New York City sent a letter to the Florida Department of Corrections July 16. It said the bans were “part of a troubling pattern by Florida prison officials to silence the Militant. Each confiscation represents an assault on the United States Constitution and on all those who care about freedom of thought, inquiry and expression.”

The letter notes that censorship of issues of the paper gives the impression that “Florida prison officials were offended by criticisms of the prison system.”

The Militant  hadn’t known its subscribers in Kansas prisons were being denied the paper until the end of May, when Newsweek  magazine reported that Books to Prisoners and the Human Rights Defense Center had obtained and made public a list of 7,000 books and periodicals banned there. Eight issues of the Militant  were on the list, but Kansas officials had never informed the paper.

The Militant  wrote to one of its Kansas prisoner subscribers to find out if he had received any issues. Soon after, Kansas officials sent the Militant  official notification it had banned three issues. 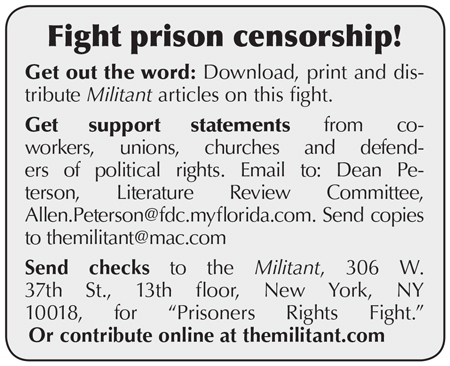 The socialist newsweekly’s lawyer, David Goldstein, sent a letter informing Kansas officials that the paper would appeal all the bans. Douglas Burris, corrections manager, Risk Management of the Kansas Department of Corrections, replied that the  central office reviewed and has “determined that these issues did not present a direct threat to KDOC operation. The censorships have been overturned.”

The Militant  is calling on its readers to use the victory in Kansas to win more support for overturning Florida prison officials’ ongoing censorship.

The National Coalition Against Censorship, Amnesty International USA, the National Lawyers Guild, and the American Civil Liberties Union of Florida, as well as Riverside Church Prison Ministry have sent letters to the Literature Review Committee calling on it to overturn the bans.

Many Militant  readers in Florida prisons are following the fight closely. “Thanks for the effort you are making to try to make sure we receive your newspaper which brings us a lot of important information about what is happening in the world,” one Florida prisoner-subscriber wrote July 11.

Readers of the Militant  can help. Get co-workers to sign a letter or petition. Talk to your church group, your local union officials. The more letters that are sent to Florida prison officials, the greater the possibility of winning.

Front Page Articles
Feature Articles
Also In This Issue
Editorials
On the Picket Line
Books of the Month
As I See It
25, 50 and 75 years ago
Letters