HAZARD, Ky. — “The threats and sanctions against Iran and the wars the wealthy capitalist rulers carry out abroad are an extension of their exploitation and abuse of working people here in the U.S.,” Socialist Workers Party leader Alyson Kennedy told 26-year-old Kendra Canada when she and a campaign supporter knocked on Canada’s door here July 12.

Canada, who was caring for her 8-year-old and three-month-old sons, told Kennedy that her coal miner brother, like other employees of Blackjewel Coal Co., had several thousand dollars of wages taken back out of his bank account when the mine owners filed for bankruptcy the previous week.

“He’d been put on and laid off repeatedly by Blackjewel,” Canada told Kennedy. “Last Friday he and his wife deposited his $3,000 paycheck and headed for Florida for a much needed vacation with their kids. When they tried to use their debit card, it was declined.

“They’re going to Harlan for meetings with other miners to discuss what to do,” she said. “Probably the owners will reopen as a ‘different’ company and go unpunished.”

Kennedy, a former underground coal miner who was the SWP candidate for U.S. president in 2016 and ran for mayor of Dallas earlier this year, is joining Malcolm Jarrett, SWP candidate for Pittsburgh City Council, on a national campaign tour to advance the party across the country. The first stop was Kentucky.

Kennedy and Jarrett will speak at public meetings and to the media, join local party members talking to workers on their doorsteps, and participate in labor and social protest actions, promoting the need for workers and farmers to break with the Democrats and Republicans. Amy Husk is SWP candidate for governor and Samir Hazboun for lieutenant governor in Kentucky.

Kennedy got a warm reception in eastern Kentucky coal country July 12-13, campaigning with Hazboun and two supporters. The Hazard Herald  here and the Mountain Eagle  in nearby Whitesburg interviewed Kennedy and Hazboun.

Ben Gish, editor of the Mountain Eagle, said his parents founded the paper and it backed the United Mine Workers union. They had subscribed to the Militant  for years, he said. Local cops had burned the Mountain Eagle’ s office down in 1974 because of its pro-union stance.

“We’re used to coal companies using bankruptcy courts to cheat workers,” Jessica Ison, 26, a farmer from a coal mining family, told Kennedy and Hazboun at a farmers market in Whitesburg. “They file bankruptcy, change owner, change the name and reopen as ‘another company,’” she said.

“I remember when South East Coal did the same thing around here in the 1990s,” James Melton, 67, a retired union miner and family friend of Ison, added.

Ison, Melton and Melton’s wife, Lita Melton, were interested in the SWP program. The Meltons subscribed to the Militant.

Knocking on doors in Hazard, Hazboun met Rhonda Curtis, whose husband was a nonunion strip miner for 27 years and is now bed-ridden, fighting for disability benefits. A former Republican, Curtis said she liked the SWP platform. “People really need to know your names,” she told Hazboun, “and that workers are running.” She said she’d like to organize a meeting when the candidates return to the area.

Jarrett met Tyrel Sanderson, 27, a construction worker, when he and campaign supporter Jacquie Henderson knocked on Sanderson’s door in Louisville’s West End the next day. “The SWP candidates are opposed to Washington’s wars that sacrifice workers here to kill workers in other countries,” Jarrett said. “These wars are carried out so the rich can get richer attacking working people. The same class that exploits us here doesn’t care how many soldiers come back torn apart or killed.”

“You’re right about that,” Sanderson replied. “And it’s not just the soldiers who get torn up. Their families do too. I was working 70 hours a week and still couldn’t pay the bills, so I signed up for two tours of duty, in Afghanistan and Iraq. By the time that was done I didn’t have a family anymore.”

“We shouldn’t have to use all our energy just to survive,” said Jarrett. “We’re not animals! We need to work together to change this, to stand together in solidarity. That’s why we’re for using union power to defend ourselves, every worker, and not look at what the bosses’ government says about some immigrants’ papers or the age, sex or color of any of us. I think we can learn from what working people in Cuba have done since they made a revolution in 1959, showing it’s possible to begin to transform themselves as humans as they took power and uprooted capitalist exploitation.”

Husk and Dan Fein, one of four SWP campaigners who came down from Chicago to help out, talked with five young men sitting on a porch in the West End. Husk explained that she’s running a working-class campaign against the two parties of the rich. “What are you going to do about the cuts they’re making in social services, like here in Louisville?” Robert Gummer asked.

“We have to organize a fight to keep them from cutting our services,” said Husk. “Both the Democrats and Republicans have cut the social wage, as William Clinton did when he ‘ended welfare as we know it’ in the 1990s.”

“We’ve never gotten anything by voting,” said Husk. “We have to fight like workers did during the labor upsurge in the 1930s depression or the Civil Rights movement in the ’60s.” All five pulled out a dollar and got a Militant. Two gave their phone numbers so SWP members could arrange to stop back and have more discussion.

SWP campaigners also joined the picket line of Teamsters Local 215 members on strike against Irving Materials concrete company in Evansville, Indiana; and organized a campaign barbecue, a press conference on the steps of the state Capitol in Frankfort, and a July 13 evening public campaign meeting in Louisville.

“Workers live paycheck to paycheck,” Jarrett said at the Louisville meeting. “The capitalists don’t care if we have to work two or three jobs to make ends meet. They don’t care if eight or nine cab drivers in New York commit suicide when the medallions they went into debt for drop in value due to increased competition with Uber and Lyft drivers, whose rates are being cut by their bosses as well.”

He said from what he’d seen in Kentucky, the SWP has some real opportunities to pursue.

In Frankfort July 15, Kennedy hailed the victory of the Gibson family, owners of a small bakery in Oberlin, Ohio, who won an award for $25 million in damages in a lawsuit against Oberlin College officials for their race-baiting smear campaign (see article on front page).

“The Gibsons refused to roll over and give up. They said ‘No!’ to the race-baiting attack, got widespread backing of working people in hard-hit Lorain County, and won,” she said. “The SWP candidates will be talking about the importance of the Gibsons’ victory and why it is an example for working people everywhere in defense of our rights.” 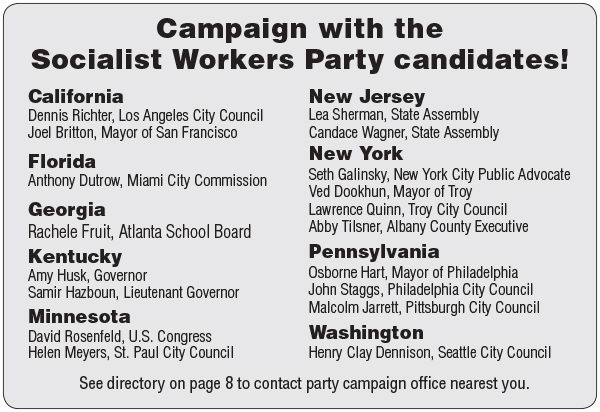 SWP calls for workers control of production, safety at PG&E

Front Page Articles
Feature Articles
Also In This Issue
Editorials
On the Picket Line
Books of the Month
As I See It
25, 50 and 75 years ago
Letters