No matter who takes the place of Ricardo Rosselló as governor of the U.S. colony of Puerto Rico at 5 p.m. Aug. 2, the political, social and economic crisis there will continue. And so will opposition to the colonial regime’s and the U.S. government’s measures that target working people.

The 15 days of massive protests demanding Rosselló’s resignation convinced the U.S. and Puerto Rican ruling classes that the governor had to go. But seven days after Rosselló announced his resignation and two days before it was to become effective, the ruling parties still had not found a replacement who they hope will inspire enough confidence among working people and others to get things back to “normal.”

According to Puerto Rico’s constitution, next in line would have been Secretary of State Luis Rivera Marín, and after him the secretary of justice.

But Rivera was one of a dozen government officials and advisers in Rosselló’s New Progressive Party involved in a “chat” scandal with the governor that sparked the protests — the release of more than 800 pages of abusive online comments by Rosselló and other officials showing the administration’s scorn for working people.

Rivera resigned as have many other officials. The scandal was the straw that broke the camel’s back, releasing pent-up anger following more than a decade of attacks on working people’s standard of living, government negligence in the face of Hurricane Maria and widespread corruption. Underlying it all is a century of U.S. colonial rule that has meant working people not only face exploitation by domestic capitalists but subjugation at the hands of Washington.

At all the protests some participants demanded repeal of the U.S. law that imposed the Financial Oversight and Management Board for Puerto Rico. The junta, as it is called in Spanish, was appointed by then-President Barack Obama, with the power to override decisions of the local government to maximize payment of the colonial regime’s $74 billion debt. The government also owes $55 billion to retiree pension funds.

“Everybody joined the 15 days of protest, nobody was missing,” Lenis Rodríguez, who works at a pharmaceutical plant, told the Militant by phone from Yabucoa, July 29. “It didn’t matter if you were blue, red or green” referring to the colors of the two main bourgeois parties — Rossello’s New Progressives and the opposition Popular Democratic Party — and the green of the Puerto Rican Independence Party.

‘The people have had enough’

Working people have not seen many results from federal aid nor the millions of dollars collected as donations. “The politicians and others got rich, but we didn’t see anything,” Rodríguez said.

“The highways have not been repaired, houses are still deteriorating and there are no jobs,” he said. “The people have had enough.” But Rodríguez still hopes that “someone better” will take Rosselló’s place until elections next year.

There is no working-class alternative currently challenging the lesser-evil politics of the capitalist parties.

More than 100 years of U.S. colonial rule and imperialist plunder of the island’s natural resources and labor has exacerbated the impact of the worldwide economic crisis of capitalism there.

Unlike the United States, where there has been a small “recovery” since the 2007-2008 financial collapse and recession, Puerto Rico — a U.S. colony since 1898 — has been in a steady decline.

Gross domestic product has dropped every year except one since 2009. Even before Hurricane Maria ravaged the island, tens of thousands of people were leaving to find work in the United States. The official unemployment rate is now 8.5%, double that of the U.S.

When Hurricane Maria hit, the island’s already antiquated and deteriorated electric and water grid collapsed. It took a year to get it restored and even now some isolated rural areas are still without power.

In the absence of government action, working people relied on each other to weather the storm and its aftermath. Teachers and parents cleaned up and repaired schools. Communal kitchens were organized.

Despite the storm damage, the junta insists that the colonial government accelerate the anti-working-class measures it had been implementing over the past decades. The next governor must “work with the federal control board,” demanded the editors of the Wall Street Journal July 25, to implement “reforms,” including job furloughs for public sector workers and ending annual Christmas bonuses.

“People have lost their fear of taking to the streets,” Luis Rosa told the Militant July 30. Rosa, who spent 19 years in prison in the U.S. for his support for independence for Puerto Rico, now lives in Aguadilla, where he is a self-employed construction worker.

The problem is U.S. colonialism

The FBI is carrying out investigations of corruption and has arrested several people, including two former officials the day before the release of the chats. “But we don’t want the FBI. When we are an independent country we will confront the corruption ourselves,” Rosa said.

“The problem is the system. There can be no democracy, no ‘transparency’ under colonialism,” Rosa added. 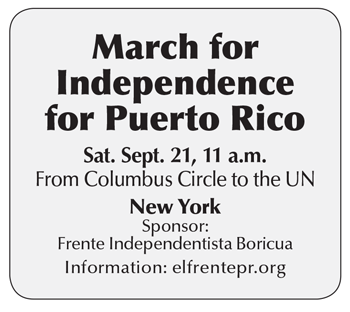 “Personally I am for cancelling the debt. It’s not our debt, it’s theirs,” Rosa said. Calls to audit the debt have been part of many of the recent protests, he noted, but have not been a central theme.

“All the parties have marginalized working people,” said Mildred Laboy, a leader of the community group Arecma, in Humacao. “We’ve been abandoned by the government.”

“One party wins and defrauds us,” she said by phone July 30. “Then the other one wins and it’s the same.” No matter who is the new governor, she said, struggles against government measures that hit working people will continue.

Laboy, a retired teacher, said she would be joining a demonstration the next day in Humacao to protest government plans to close more schools and threats to cut pensions. “We have to keep fighting for everything,” she said.