With the impoundment of issue no. 26 of the Militant, Florida prison officials have now censored 10 of the last 12 issues of the paper. The last six were all banned for featuring articles about the authorities’ previous censorship! The prison system’s Literature Review Committee has upheld all but one of the seven bans it has reviewed so far.

All of the impoundment notices falsely assert that the articles present “a threat to the security, good order or discipline of the correctional system.”

The Militant has sent the paper to its subscribers behind bars in Florida for decades. From 2012 to 2016, prison wardens only impounded four issues of the paper. All of those bans were overturned by the Literature Review Committee.

From 2017 to 2018 some 21 issues of the paper were impounded; almost all the bans were overturned.

“Nothing in our political viewpoint or coverage can justify violating our rights and the rights of our subscribers,” Militant editor John Studer said in a July 30 interview. “Whatever side of the prison walls workers find themselves, they have the same need to read books and newspapers of their choosing, to educate themselves, to know what’s going on in the world, to think for themselves.”

The first ban this year upheld by the Literature Review Committee featured an article on Albert Woodfox, who spent over 40 years in solitary confinement at Angola state penitentiary in Louisiana. The banned issue covered Woodfox’s New York tour, including a speech at the Brooklyn Public Library and one at the Fortune Society, a government-funded program that aids former prisoners getting jobs and housing.

In his appeal of the bans on issues no. 24 and 25, the Militant’s lawyer, David Goldstein, notes that “it has become obvious” that the Florida Department of Corrections is “redoubling its efforts to ban the Militant from its subscribers” behind bars in Florida. 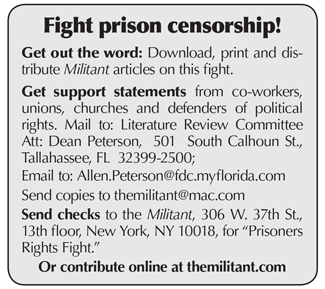 Goldstein points out that Kansas prison officials had banned the Militant along with 7,000 other publications. After reviewing all of the banned issues of the paper, including many of the same ones that have been banned in Florida, the Kansas Department of Corrections concluded that not one of the papers presented “a direct threat” to the prison system and lifted all the bans.

The Militant is not the only paper that includes coverage on prison abuse, solitary confinement and related issues. Goldstein notes that the Miami Herald ran a whole series on abuse in Florida prisons from 2012 to June 2019. But only one issue was banned, and it was not one of the issues with the articles on prison abuse.

“Absolutely nothing in these [Militant] articles could rationally be found to depict, describe or encourage activities which may lead to the use of physical violence or that otherwise presents a threat to the security” of the prison system or any individual, Goldstein notes.

The only conclusion, he says, is that Florida prison officials “ban the Militant” because of “its political views.”

Amnesty International USA, the National Coalition Against Censorship, the National Lawyers Guild, the American Civil Liberties Union – Florida, WeCount! the Prison Ministry at the Riverside Church in New York and others have sent letters to the Florida Literature Review Committee, calling on it to overturn bans on the Militant.

In its letter the Prison Ministry of the Riverside Church writes, “Each confiscation represents an assault on the United States Constitution and on all those who care about freedom of thought, inquiry and expression.” More letters are needed! See the box below for how you can strengthen the fight against prison censorship.