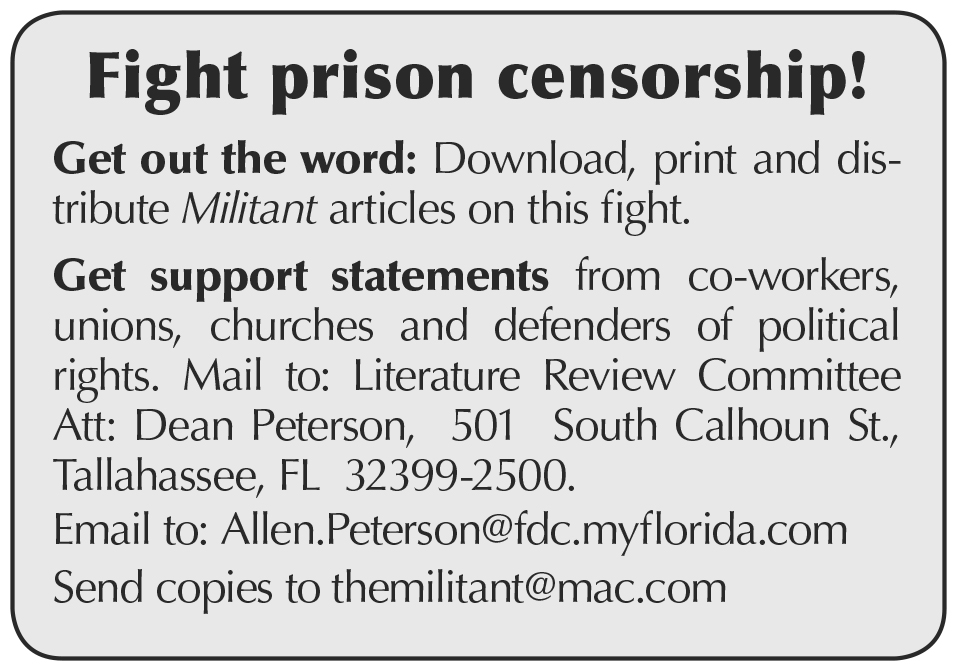 “We the undersigned Walmart workers in Illinois demand the end to the censorship of the Militant  newsweekly by Florida prison officials,” said a petition signed by 22 workers at three stores and sent to the prison system’s Literature Review Committee in early August. “Prisoners have the right to read what they want.”

Florida prison officials have impounded 11 of the last 12 issues of the paper, nos. 17-20 and 22-28. They claim these present “a threat to the security, good order, or discipline of the correctional system.”

Florida prison authorities are banning the Militant  “because of disagreement with its political viewpoint,” wrote David Goldstein, the Militant’s attorney, in an appeal filed with the Literature Review Committee challenging the impoundments of issues no. 26 and 27.

The notice for impounding no. 27 cites “Front Page & pg 9 Victory over ban in Kansas — fight in Florida.” The article points to the decision by Kansas prison authorities to overturn their ban on the Militant. Facts about the Kansas censorship first came to light in May when Newsweek  magazine reported that the Human Rights Defense Center had obtained and made public a list of 7,000 books and periodicals banned there. It included eight issues of the Militant.

When the Militant’s attorney informed Kansas prison officials that the paper would appeal these bans, they were promptly overturned. Kansas officials said they reviewed every issue the Militant  had sent, and could find no valid reason to ban them.

“It is simply inconceivable,” wrote Goldstein, “that coverage of censorship in Kansas prisons that Kansas prison officials subsequently overturned as presenting no threat to prison operation could threaten prison security in Florida.”

The first ban the Literature Review Committee upheld this year was for issue no. 15. It covered a speaking tour by Albert Woodfox, who spent over 40 years in solitary confinement in a state penitentiary in Angola, Louisiana, including a speech at the Brooklyn Public Library. All but one of the rest were clamped down on for reporting on the Militant’s ongoing fight against prison censorship.

Over the past several months Florida prison authorities have stepped-up efforts to keep the paper out of the hands of subscribers behind bars. From mid-2017 to late 2018, nearly one-third of issues were impounded, but almost all were overturned by the Literature Review Committee. Of the 10 issues recently banned, the committee has upheld censorship of nos. 18-20, 22 and 23. Appeals of nos. 24, 25, 26 and 27 are pending.

Impoundments of over 30 Militants in Florida over the past two years is “at least 6-7 times as many as in the entire rest of the nation, state and federal prisons combined, in the past decade,” noted Goldstein.

The Militant  currently has 142 subscribers in 74 prisons in 21 states, but it is only being systematically censored in Florida.

Among the groups that have called on Florida officials to overturn the bans are Amnesty International USA, the National Coalition Against Censorship, the Florida Press Association, National Lawyers Guild, the American Civil Liberties Union of Florida, WeCount! in Miami-Dade County, and the Riverside Church Prison Ministry.

In a letter sent to the Literature Review Committee Aug. 2, Mark Ginsburg, a professor at the University of Maryland-College Park, writes, “Banning of any issues of this informative newsweekly violates the prisoners’ First Amendment rights to read as well as publishers’ and others’ rights to send literature to individuals who have been incarcerated.” Instead of banning the Militant, he added, each prison library should get a subscription.

“With every issue they ban, it becomes even clearer that Florida prison officials just object to our political views,” said Militant  editor John Studer. “This is a violation of constitutional rights. We’re fighting to defend our right to have subscribers behind bars and the right of prisoners to read material of their choosing.”