PITTSBURGH — “The 2020 presidential elections are well underway. Donald Trump is running for reelection and a couple dozen Democrats of various stripes are hammering each other to be the one to stand against him. Each one seeks to represent the interests of the ruling capitalist class,” said John Studer, Socialist Workers Party national campaign director, at a meeting here Aug. 10.

“The SWP will run its own presidential campaign against the twin parties of capitalist exploitation and oppression,” Studer said, “to join in the discussions and struggle of working people and point an independent working-class road forward.”

Also speaking at the meeting were Malcolm Jarrett, the party’s candidate for Pittsburgh City Council, and Melanie Meade, a resident of nearby Clairton who has helped lead the fight against pollution spewed out at U.S. Steel’s Coke Works plant that has sickened workers and area residents there. Jarrett was met with applause when he told supporters he had been certified for the ballot. “We gathered our signatures by visiting and talking with workers about the need for a working-class alternative and this effort led us to fighters like Melanie.”

Meade described the fight she is involved in against U.S. Steel. “They racked up 6,700 violations and got hit with $2 million in fines for their pollution,” she said. “They had two fires within six months and deny they caused any harm to working people.”

Meade and Jarrett both spoke out at a recent hearing about a settlement between the Allegheny Health Department and U.S. Steel. “The Health Department is in cahoots with industry,” she said. “They don’t believe we have a voice. That’s why I was glad to be with the Socialist Workers Party there.”

“A fighting union movement is needed where workers can win control over safety and production,” Jarrett said.

He pointed to the example of the Miners for Democracy movement in the United Mine Workers in the late 1960s and ’70s. “Workers led a revolution in their union and won the right to shut down the mine when they determined there were unsafe conditions and fought to end the devastation of black lung disease.” For the capitalist owners, “their biggest fear is what workers will do.”

“Today the stock market is high and the government claims workers have close to full employment,” Studer said. “But tens of millions of workers continue to face crisis conditions. For the first time in decades, life expectancy in the U.S. is falling. Young workers have to wait longer before moving out of their parents’ home and starting a family.

“And there are storm clouds ahead for capitalism that forebode deeper attacks on working people,” he added. “Manufacturing and production is falling in Germany, the U.K. and across Europe.

“More and more workers have to go into debt to try and get by,” he noted.

“Record numbers of workers over 65 are facing bankruptcy,” Studer said. “The Financial Times  says the ‘culprits are vanishing pensions, soaring health care costs and tens of thousands of dollars in unpaid student loans for themselves, their children and even their grandchildren.’”

“Because the unions are weak, and the officials are beholden to the Democratic Party as opposed to relying on the fighting capacity of the working class,” Studer said, the bosses have blood in their mouth and are demanding deeper concessions.

“The Socialist Workers Party joins workers on strike picket lines, social protests and in discussions on their doorsteps about how to organize a fighting working-class movement, build unions and rely on ourselves to fight against the capitalist bosses and their government,” Studer said. “This is the road forward.”

The Democrats, liberal media and middle-class left say the problem is President Donald Trump, Studer explained, and more particularly what they call “his base” — the working class. “They say the workers, especially those who are Caucasian, are all racists and bigots, and Trump just riles them up. They say workers have to be controlled.”

Conquests of fight for Black rights

The liberals say Trump and his working-class “base” are responsible for the heinous killings in El Paso and Dayton.

“And they prefer to use the term ‘people of color,’” Studer said, which dissolves the living history of centuries of struggle by African-Americans against slavery, the Civil War and Radical Reconstruction, the bloody imposition of Jim Crow and the powerful Black-led working-class movement that dealt a death blow to segregation in the 1960s and ’70s. Participation in these struggles advanced the confidence and fighting capacities of those who joined them as they transformed themselves and social relations, demonstrating that Black workers will be in the forefront of revolutionary class battles to come.

There is less racism in the working class today than ever before and less anti-immigrant prejudice, Studer said.

It’s also revealing, he said, what the liberals say about those who carried out the massacres. In the case of the El Paso shooter, they paint him as an ultrarightist. But in his manifesto, in addition to targeting immigrants, he also railed against climate change and said he was angry at the corporate world, angry at their treatment of working people.

The Dayton shooter was an “antifa,” a leftist, a support of Bernie Sanders and Elizabeth Warren, who joined armed protests against the Ku Klux Klan.

Both killers clearly had psychological problems, Studer noted. But the rulers have slashed mental health care. It’s been replaced by prison and homelessness, another sign of the disdain the rulers have for working people, he said. The cut-throat values and violence bred by the workings of capitalism will not be curbed without fundamental change.

“The SWP fights for mental health care as part of universal, government-guaranteed health care for all,” he said.

The liberals talk about stepping up attacks on political rights in the name of stopping “domestic terrorism,” Studer said. Former Deputy Attorney General Rod Rosenstein claimed a more precise name is “white terrorism,” pushing the notion that racist views held by Caucasians were responsible for the shootings.

“The liberals — and many conservatives — want to use these brutal murders to justify expanding the FBI, the rulers’ political police, to target people for their ‘ideology,’” Studer said. And the New York Times  says free speech is too free. They criticize the Bill of Rights for its restrictions on government interference with the right to express one’s opinion.

“The liberal press says nothing about the largest source of shootings and mass killings in the U.S., which take place in Black communities all across the country. These don’t fit their agenda,” he said.

“The SWP explains that there is a road to end anti-social violence,” Studer said. “It’s the fight to end capitalism’s exploitation and oppression, its wars, racism and injustice. As Malcolm X said, it is struggle that awakens you to your self-worth.

“During the civil rights battles, crimes and shooting in the Black community plummeted,” he added. “Working people had something worth fighting for and were transformed by the struggle. This is the road shown by the Cuban Revolution as well. Studer urged participants to, “Join the SWP campaign!” 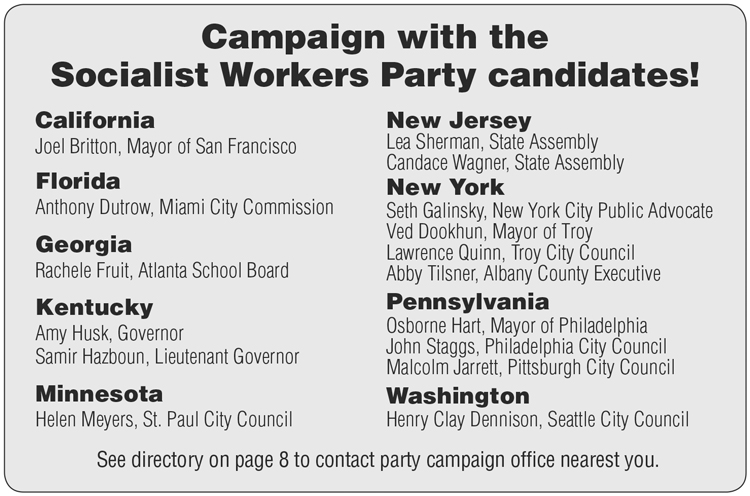 ‘Workers need to organize unions to fight to change our conditions’

“When I heard about the raids in Mississippi it made my skin crawl,” Stacey Farley told Rachele Fruit, Socialist Workers Party candidate for the Atlanta School Board, in Hermitage, Tennessee, Aug. 9. Farley was referring to the arrest two days…