“The Socialist Workers Party takes its political positions on all questions based on the fact that there are two classes — the working class and the capitalist class,” said John Studer, SWP national campaign director, to over 30 people attending a Militant Labor Forum in Albany, New York, Aug. 17. The event celebrated the opening of a new storefront SWP headquarters.

The capitalist class is a handful of wealthy billionaire families that rule through their two parties, the Democrats and Republicans, Studer added.

He said that the SWP joins fights by working people and puts forward a program to advance the line of march of the working class.

The meeting was attended by campaign supporters from across the region. By the end of the evening $2,600 had been raised toward the $3,500 fund for the new hall.

The same evening SWP leader Dave Prince was the speaker at a Militant Labor Forum at the new forum hall and SWP campaign headquarters in Louisville, Kentucky.

“The Socialist Workers Party decided to organize a branch here about a year ago, but the party has a long history in Kentucky and the area,” Prince said.

“It has participated in miners’ and other labor and social struggles in Kentucky and West Virginia; in the 1975 Louisville school desegregation fight; the struggle for women’s access to family planning, including the right to abortion; and voting rights for “felons.” The SWP is well known, he said.

Among the participants in the event were a couple of workers from a Walmart store in the area who work with members of the SWP there.

Prince explained that there is bipartisan agreement by the Democratic and Republican parties, both parties of the capitalist rulers, on major questions.

“Former President Bill Clinton started wars that George Bush, Barack Obama and Donald Trump continued,” Prince said. “On his watch with mandatory sentencing and other measures, the number of people incarcerated jumped to 1.4 million in the U.S. He was known as the ‘death penalty president.’”

Kentucky SWP candidates Amy Husk for governor and Samir Hazboun for lieutenant governor were at the meeting. The SWP builds solidarity with the coal miners and their families who have been protesting for weeks in Harlan County against nonunion Blackjewel Coal Co. Party members have made several campaign trips to the area, and used the campaign to build solidarity around the state. (See article on front page.)

“SWP members do everything possible to organize unions,” said Prince. “A union isn’t a ‘thing,’ but the act of workers building unions, solidarity of workers fighting together to defend themselves and other workers from the bosses’ attacks. It is about what we do. And in the process we change our view of ourselves and what we’re capable of.”

The SWP branch has now raised $2,000 of a goal of $2,500 toward establishing the new headquarters and getting books with the program of the party.

Workers need their own party

Castilleja said she is still paying for the premature birth of her son, even though she had health insurance at the time. “He is now 4 years old,” she said.

Meyers explained that health care in Cuba is available as a product of the revolution made by working people, who overturned capitalist rule and took power into their own hands. “Workers get the health care they need, not what they can pay,” she said.

They also discussed the fight by the Kentucky miners. “If the community doesn’t stick together, nothing is going to change,” said Castilleja. She bought a six-month subscription to the  Militant.

In London, Communist League members joined a demonstration Aug. 15 of thousands for Kashmiri freedom outside the Indian High Commission.

“They have occupied Kashmir since 1947,” Fazal Hussain told the  Militant.  “Now there’s a curfew, shortages of food and medicines.”

Seven people picked up subscriptions to the Militant from Communist League members and 16 bought books on revolutionary politics, including eight copies of Malcolm X, Black Liberation, and the Road to Workers Power.

Jacob Perasso in Albany, New York, and Maggie Trowe in Louisville, Kentucky, contributed to this article. 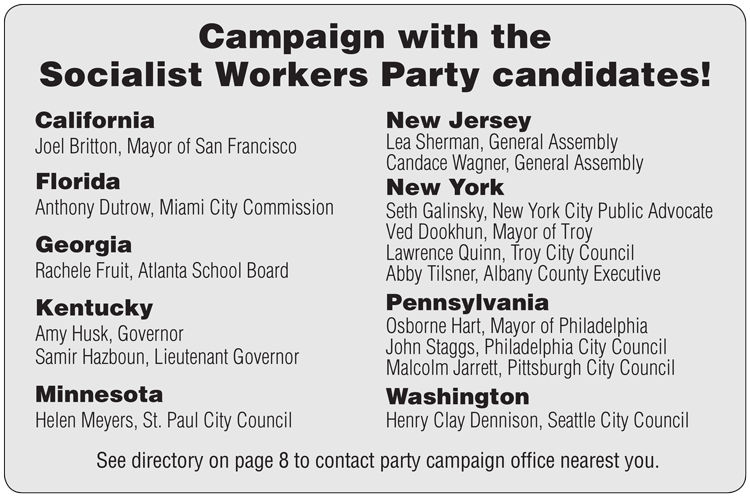