With the notice this week from Florida prison officials that they have impounded issues no. 29 and 30, they have now banned 11 of the last 12 issues of the Militant. In upholding these bans, the Department of Corrections Literature Review Committee has never cited a specific sentence in any issue of the socialist newsweekly to substantiate the allegations that the  Militant  violates any prison rule or regulation.

Virtually all of the impoundment notices sent to the paper have claimed the ban is needed to keep out coverage of our fight against prison censorship.

“This sustained censorship is a serious attack on the rights of workers behind bars to receive and read the news and political opinions they choose,” Militant  editor John Studer said August 20. “And it’s an assault on freedom of the press.

“We’re asking our readers to help win broad support for our fight to put an end to these bans,” he said.

The impoundment notices for issues no. 29 and 30 by the warden at Sumter Correction Institution don’t make sense. The one for no. 29 claims that the paper “contains criminal history, offender registration, or other personal information about another inmate or offender, which, in the hands of an inmate, presents a threat to the security, order or rehabilitative objectives of the correctional system.”

But there isn’t a single word in the entire issue that contains any information about “another inmate,” much less anything that presents a threat. The Florida prison system’s rules require the impoundment form list the alleged offending article, but on this one it’s left blank!

The impoundment notice for issue no. 30 alleges an article that reports that the Florida Press Association, which represents almost every newspaper in the state, is a threat because it has called on the Literature Review Committee to rescind the bans on the Militant.

But then it lists “Page 7 Racist.” Besides an article on a Cuba solidarity conference in Nepal, the other two articles are “Do El Paso Killings Show a Rise of White Supremacists?” and “Gibson Family Vows to Continue Their Fight.” The first discusses questions on the front page of every paper in the country over the last couple weeks. The second describes the fight of a small bakery against slanders by Oberlin College that they are “racist.” There is no way for the  Militant  to know what the prison officials object to.

“Our newspaper,” one subscriber wrote the Militant  this week, “does not present a threat to the security of the institution whatsoever in any way, shape or form. This is not an underground newspaper.”

While they’ve banned his  Militant,  he reports, prison officials have allowed “neo-nazi and other racially informed reading material” into the facility.

Join the fight to overturn the ban on the Militant! 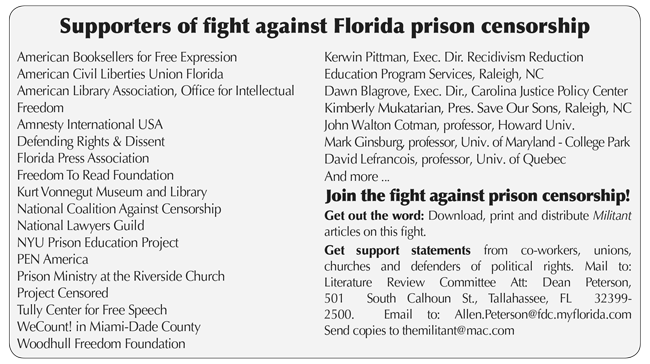